Several months ago, I had the pleasure of previewing Lilly Looking Through while it was only available in demo form. From what was a very short demo, I gleaned that Geeta Games’ debut title was a charming, subtle and quietly touching little game. After playing the full release, Lilly still impresses, albeit on a similarly short timescale.

At the outset of the game, our titular hero finds herself wandering through an unknown and run down location in search of her wayward younger brother Row. After Row is whisked away by a mysterious piece of red fabric, Lilly finds a magical pair of goggles which, when equipped, allow her to look into the past. This is where the game’s main focus lies; standard point-and-click puzzles with an added layer of dimension shifting, a la Time FCUK. When shifting Lilly’s vision to the past, locations become brighter, cleaner and less run down (implying some sort of apocalypse has taken place), and new ways to traverse levels and solve puzzles become apparent. Thusly, most puzzles in the game are solved by changing something in the past to alter the present.

Although this time shifting mechanic has been seen before elsewhere, Lilly Looking Through executes it perfectly, making for puzzles that are, while not overtly challenging, relatively fresh and unique. One particular puzzle involving colour mixtures was thoroughly entertaining, despite its low difficulty level. If severely challenging puzzles are your bag, then Lilly might seem a little tame to you, as is befitting of its “for all ages” nature. If you’re in the mood for some more relaxed puzzle solving, though, Lilly most certainly has you covered. 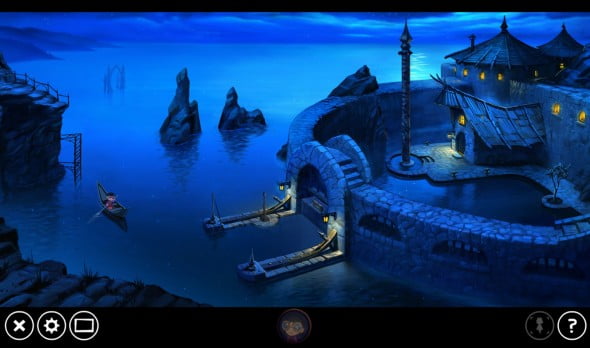 As I mentioned in my preview, Lilly Looking Through really shines through its stellar art direction and aesthetic quality. Lilly herself is designed and animated with the dough eyed, childlike innocence evocative of Pixar or Double Fine, which ties in neatly with the game’s overall tone of childlike imagination and wonder. The same care and attention has also been put into crafting the game’s beautiful backdrops, each of which is gorgeously painted in 2D, and contrasts wonderfully with Lilly’s 3D skips and jumps. When it comes time to put the goggles on, these backdrops only become more outstanding, as the “old”, run down backgrounds juxtapose against the “new” ones.

In terms of sound design, things aren’t quite so flawless. Although Lilly is accompanied on her journey by a beautiful, soothing and at times hauntingly ambient score (Lilly’s footsteps are often accompanied by timed piano keys in particularly adorable moments), diegetic sounds often sound tinny and poorly recorded. This isn’t a major issue, but often the sounds of voices or water droplets sound particularly harsh amidst an otherwise calming and elegant soundscape. 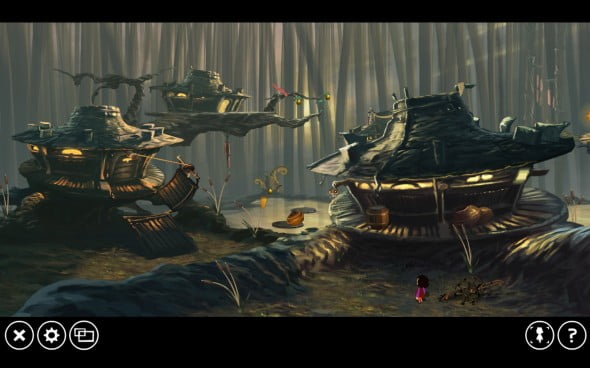 The only major complaint one might have with Lilly Looking Through is the game’s rather short length. The game clocks in at about two hours for the average puzzler, and there are only ten main levels to beat across the story. This then becomes a matter of length of game vs. price paid for most people, but rest assured Lilly Looking Through accomplishes plenty within a short space of time; it just would have been nice if the experience had lasted longer.

Lilly Looking Through certainly isn’t for everyone. It will never exhilarate or possibly even excite you, but what it does achieve is something so few modern games do: it relaxes the player. Lilly will take you on a calm, heart-warming and beautiful journey that will resonate with you long after you’ve finished playing.

Lovers of high octane thrills and difficult puzzles should avoid this game at all costs; Lilly Looking Through is a minimalistic and relaxing affair, and is better for it. With beautiful art direction and some engaging puzzles, Lilly is a beautiful and understated gem that should satisfy most lovers of point-and-click adventures.