Have you ever wanted to be a farmer but were discouraged by the long hours, back-breaking labor, unpredictable demand market, and the soul-crushing possibility of a natural disaster that destroys a whole year’s worth of labor and ultimately results in your financial collapse and the starvation of your family as you quietly cry yourself to sleep at night and reminisce  about your lost and crushed dreams of finally saving up enough money to open up your own haberdashery? Yes? Well have I got the game for you!

Farming-Simulator 2013 is the fourth installment in developers’ Giants Software farming simulation series and is currently available on iOS, Android, Windows, Mac OS, Kindle, PS3, PS Vita, and Xbox 360. In this business oriented single-player simulation game, players have the option to buy and farm fields, grow crops, breed livestock, and make business transactions in order to purchase capital that will further expand their farming empire. Farming-Simulator 2013 did have some positive aspects by providing players with an insight into the widely overlooked agricultural industry, but its unpolished, uninteresting, and tedious gameplay makes the game fall-short of the expectations that other simulation-type games have set.

The game begins with an optional tutorial, demonstrating fundamental game mechanics and controls that will be necessary in operating and maintaining a farm. The tutorial is very straightforward and minimal when it comes to theory and explanations of what the ultimate goal/objectives for the game are (hint: there are none). The tutorial briefly covers the four parts of the game crucial to your success: plowing, sowing, cultivating, and harvesting (with separate tutorials for other jobs such as using different balers included in the menu). Unfortunately, after these few tutorials, the extent to which the game guides you into becoming a successful farmer is limited and, after they ended, I was a bit confused on how to continue the game from where I was left-off and ended up just driving around town like a mad-man attempting to see if I could run over people with my tractor (to no avail); however, while the developers are not directly informative on game techniques and hints, the game has a huge community of veteran simulation farmers who are always ready to help a muddled farming enthusiast, such as myself. 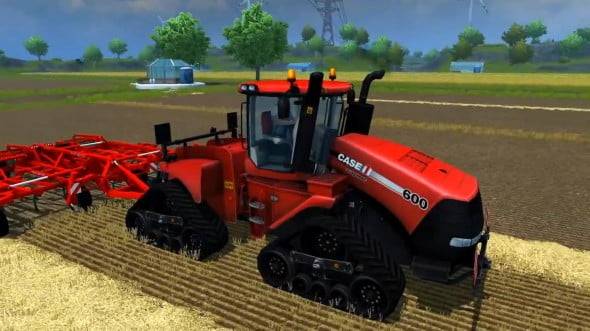 Following the tutorial you find yourself with one plot of land (of over forty available to later purchase either directly or through auctions), several low-grade vehicles for accomplishing basic farming tasks, and several building for storing food and raising livestock (of which there are three: cows, chickens, and sheep). Starting off with such little money means that the pacing for the first week or so of the game is slow. It is also painfully tedious to the point where you would rather go outside and watch grass grow, thinking that that would be more stimulating. But as you invest in better and more equipment as well as hire workers to do all the cheap labor instead, you soon find yourself with greater control over your business and more financial flexibility over how you approach your business (but I warn you, accumulating such wealth takes A WHILE. If you do not become physically and emotionally invested in maintaining your farm you will become bored of the game very quickly).

In addition to the main elements of gameplay (growing crops and selling them on the market to invest in more capital and once again begin the vicious farming cycle), Farming-Simulator 2013  also offers optional “missions,” which are essentially just moving heavy equipment around town or mowing grass. These “missions” are timed but, when you first begin the game, because of your lack of equipment, it is impossible to complete the majority of the missions and you’re forced to deny them or face failure. While the missions do eventually offer good money, they are extremely uninteresting. The developers had the possibility of creating a countless number of more stimulating and creative missions but missed the opportunity at doing so, leaving a feeling of being unrewarded and discontented. 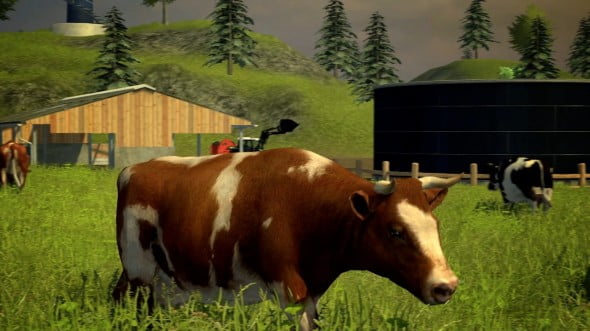 While some may find this game very relaxing and calming, I found it to be a bit boring and disenchanting (though I tried not to raise my hopes for such a game too high). Aesthetically, the graphic environment is very disappointing and of low-resolution textures. As you approach surrounding trees and buildings, the details are slow to render and are almost entirely absent if you are looking at them from the distance. This makes watching the weather and the status of your fields a problem at some points (though this is partially resolved by looking at a map at the corner of your screen which gives information on the growth and development of your farming areas). Furthermore, the game map, displaying the location of several buildings and farms, is ambiguous at best. With the lack of labels concerning different farming sections. you are constantly guessing where particular fields are or what specific buildings do until you take the time to personally investigate them. The size of the game-world is not so big that faster modes of transportation are a necessity (but the option to quickly switch between machinery is extremely helpful) and not so small that farm expansion feels limited. On the contrary, the acceleration and speed of some of the less expensive machinery can sometimes be annoying when driving around town, especially when making sharp turns that require the vehicle to slow down and go through the acceleration process once again. Lastly, the game can be a bit glitchy at some points in which falling through vehicles or getting stuck in close spaces is a problem.

With mod support and official DLCs, more and better content has already been released and hopefully will continue to be released in the future. Farming-Simulator 2014 has recently been launched and is available on iOS, Android, and Kindle.

While Farming-Simulator 2013 can be different and insightful regarding the agricultural industry, it has a very specific niche appeal and is not really a game meant for or aimed at casual/action seeking gamers. The game requires a huge investment in time that I did not really find rewarding or worth the effort, considering that I wasn’t working to reach any particular goal, just to expand my business. The game mechanics and graphics still need a bit of work but, overall, function as they were intended to. I would recommend this game to anyone who is interested in farming or looking for a relaxing and time-consuming game but, otherwise, if you’re just riding the simulation genre trend wave, I would avoid picking this game up for its current price for its lack of an intriguing or dynamic environment/gameplay.