When we play our video games, we go in expecting escapism and sometimes gratuitous amounts of violence, sex, and mayhem. Sometimes, we get that special game that elevates the media beyond what is expected of it. And we’re talking about that game right now. The Last of Us is a morbid, yet compelling tale of survival, pain, and it’s absolutely human in its execution. Despite the heavy marketing relating to the Infected, they aren’t even the highlights of this game. In fact, the story in The Last of Us is something that will pull the gamer in to an unforgettable tale.

Understandably, some people might argue that the zombie genre is getting tired and worn out. I would usually agree, because we’ve had so many tired interpretations of it that boil down into exhausted cliches. I’m glad to say that The Last of Us effortlessly dodges those cliches in favor of more daring and even scarier moments than what can be expected in a post-apocalyptic game. It’s one of the few post-apocalyptic games that focuses on a future 20 years after the initial outbreak and the effect it has on those who didn’t know a world before, which  is what compelled me to play. I want to go as far as praise the game for showing a glimpse into a world before the outbreak and actually give you time to interact in it. You get to see the outbreak unfold and it’s a terrifying vision of panic that feels a bit like  28 Days Later, which is a great thing to be reminded of.

It’s really the little details that makes this game that much better than the next. From pressing a prompt to have a conversation about a broken down ice cream truck to just petting a dog, it makes the game feel that much more involved with the player in bringing in this unusually familiar world that much closer to home.

The story is centered around the characters Joel and Ellie as they trek across the United States in search of a group called the Fireflies who can help create a cure for the fungal infection. It’s better that I avoid giving away more spoilers, because this is a game that has to be experienced without any interruptions, spoils, and the sort. The less you know, the better.

Typically, the zombie games we’ve recently had are more of the action-packed and guns blazing type. While The Last of Us can be this type of game, it encourages stealth above all, and sometimes it’s necessary for survival, making this game incredibly intense. What’s even better about this is that it forces you to use tactics and plan out a strategy before doing anything. Even being stuck in a room with three enemies is intense. It takes on a very tense atmosphere and the amount of damage enemies can unleash on you can be great if you aren’t careful.

Now, the scariest moments in this game rely on the type of infected that can’t see, but have enhanced hearing. If you get caught by these, it’s an automatic instant-kill…unless you have a shiv on you. In order to be successful in this game, you really need to explore your environment for materials, objects and more. In fact, crafting is essential to your survival. Crafting and healing in this game happen in real time which amps up the fear factor as any lost second could mean life or death here. It’s really these moments that remind you that this is a survival horror game that its core.

One issue I have when it comes to gameplay is the AI, because the friendly AI would lag behind or would just stand somewhere where the enemy can find them. Most of the time, they’re able to fight and assist you, but you have those moments where they can get in the way and it becomes frustrating. The enemy AI is responsive and I think considerably better than your companion AI. It’s not a huge gripe because of how unusual it is, but it’s something that broke immersion every now and then.

When I heard that Troy Baker was going to voice a character, I imagined another Booker type in this game. Thank god, I was proven wrong. It’s amazing the range of voices Troy Baker can pull off, because he actually had a gruff, Texas accent going on for the game. He sounds older and more serious than I expected him to be. Ashley Johnson’s Ellie was incredibly convincing as a 14 year old, which I have to say makes the game that much harder to play through. These are fictional characters you will care about by the journey’s end, and the voice actors for Joel and Ellie are just so vibrant that they really do bring these characters to life. I have to give props to Hana Hayes, Merle Dandridge, and Annie Wersching among others. The emotions in this game really do come through and with these voice actors, it becomes a beautiful piece of work.

The music is also something that was really engaging. It was emotional, it added on tension, and it was mesmerizing in every sense of the word. Gustavo Santaolalla found a tone that fit the mood of the game perfectly, which is a hard feat in itself. I’ve listened to the soundtrack a few times after finishing the game, just remembering these moments and getting chills down my spine. It’s a great soundtrack just to get by itself.

The Last of Us is a gorgeous piece of work as far as the graphics go. This is a game that has to be played on a big screen HDMI capable TV in order to really appreciate it. The character models were something I loved to look at, because of how well made they were. The motion capture in this game is so well done, and I really hope more games wanting a more cinematic approach like this one take advantage of it. 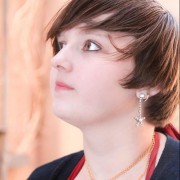 Dallas is bumming it out in Albuquerque, waiting for the new school year to start and to get back to learning Japanese. In her spare time, she's either eating, playing video games, watching horror movies, or working.
Leave a Reply