Before buying any game on sale, my first instinct is to immediately look up critic and player reviews, a tendency many other gamers also admit to. With each new release, the gaming community waits in anticipation as accredited and infamous sites such as MetaCritic, IGN, Gamestop, and (ahem) Gizorama reveal their ultimate opinions and judgments concerning their overall experience and thoughts on a game. While reviews influence some purchases more than others, they nevertheless offer detailed insight into the mechanics and concepts of specific games that would otherwise only be unveiled after purchasing it with your hard earned money (reviews have helped me dodge so many bullets). So, Steam, realizing how highly many gamers value the opinions and beliefs of others, has implemented a new feature allowing users to read what others think of a game before they purchase it. 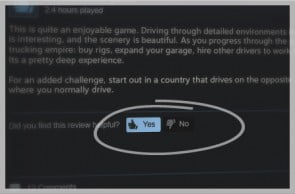 An upgrade from Steam Recommendations and currently in its beta phase, Steam Reviews gives users the option to write and read reviews on a game’s page and then rate the helpfulness of that specific review (a feature most notably implemented by the online retailer Amazon.com) so that the reviews with the best content are displayed at the top; and, just as helpful reviews are most noticeable, users can also report abusive reviews that provide no relevant or helpful content whatsoever or that violate community rules (unfortunately, it is inevitable that many of the more entitled Steam users will maliciously report reviews based on opinion rather than pertinence). 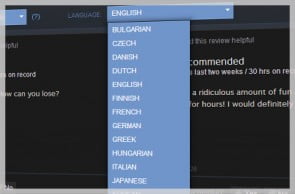 In addition to the helpful-review rating system, Steam Reviews also offers users the option to indicate their choice  of language when writing the review so that reviews of the same language for other games will later be prioritized.

Lastly, if you’re a developer, worry not! Steam Reviews is suited to accommodate just about everyone’s needs! Developers have the option to reply to a user review for their game (they are distinguished from other users by being flagged as developers) in order to acquire more feedback and thoughts on how to improve their game from negative reviewers or to simply appreciate any well-written reviews on their page. And, because a game is constantly being updated or software has significantly changed since the game’s launch, reviews that are the most recent will be the ones most prominently displayed at the top. While developers cannot delete reviews (to prevent abuse of the system), they can still flag spam until a moderator has a chance to review it.

All in all, Steam Reviews is a promising new aspect of the Steam Universe and, hopefully, abusive behavior will not impede its development into becoming a very helpful and convenient feature when considering the purchase of a game.