Have you ever wanted to travel in deep space with a tricked out ship and robust weaponry that would incinerate any who stood in your way? What if you had a team of 3 capable, like-minded pilots to support and create tactical game plays against another squad? GoD Factory: Wingmen from Nine Dots Studio has stretched the boundaries of what combat-simulation games can provide to the gaming community, and I’m all for sharing the wealth on this title before launch.

Take your basic 4 vs. 4 team play environment with the finesse of a personalized mobile online battle arena, and introduce a beautifully rendered atmosphere that just happens to be infinite (because, well, we’re traveling in outer space). If you’re a newcomer to titles like GoD Factory, but curious, you will do just fine. During our exclusive look into the game, I gathered some friends and set out to dominate the galaxy. I approached the game with great hesitancy and doubt in my abilities as a space combat squad member. However, I soon felt comfortable after the required tutorial before our first match.

The ship choices are beyond gorgeous. The designs are meticulously crafted and have a sleek image. Each race carries its own ship, and I chose each option during game play because it was too difficult to settle on a personal favorite. GoD Factory: Wingmen boasts the most careful attentive art direction, which is easy to see once you’re equipping for play. My first choice for next time? The Guantri; a perfect mixture of edgy, threatening, and sexy.

As you play Wingmen, and win matches, new customized options for each race’s ships can be unlocked. The possibilities for personalized rides are immense. You can truly create your own version of a battle ship to flaunt during matches.

After deciding on your two ships, which can be exchanged during battle to recharge, coordinating team work is your next hurdle. As always, play a MOBA with friends you trust or can work well with. It’s a squad-based battle, and can be thoroughly more productive with cooperation. We unfortunately are still licking our wounds from that experiment.

If there is anything more mortifying than playing a game versus the title’s own developers, I hate to hear about it. We grouped up and found ourselves as unready as any space combat crew could be about their first battle. Onward!

Gameplay is smooth like a hot knife through butter, each control response was sharp and immediate. You can fully explore the terrain as you take down enemy ships and (hopefully) reign supreme in under 30 minutes. Considering no match can endlessly drag on for no more than a half hour, it makes a perfect game break title for any casual or serious gamer.

How did we do? Out of 4 rounds, we won once. If I wasn’t spending my time re-orienting my position on the map, or drooling over the gorgeous scenery around me, I was drilling lasers into enemies and crashing into space materials. I was not victorious in my efforts, but I had a refreshingly confident day of deep space battle. And when you’re playing a new game, you can’t ask for anything more than to be entertained.

Interested? Head on over to GoD Factory: Wingmen ‘s Kickstarter page where you can download a free work-in-progress build before backing the project. 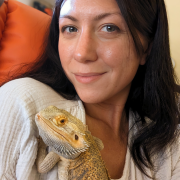 Kayleigh is a multidimensional gamer. If it involves creatures, she's on it. Guild Wars 2 and Animal Crossing are current obsessions. When she's not carefully building a digital revolution in-game, you can find her button mashing or hoop dancing.
Leave a Reply