While most triple-A developers in the current games market seem to think that sensory overload is the key to an engaging experience, independent developers are constantly surprising and impressing us with simple, subtle and finely crafted games. Geeta Games’ debut title Lilly Looking Through appears to fall into the latter category; a beautiful, intimate and oddly relaxing adventure game.

Described as an “animated adventure for all ages”, Lilly Looking Through is a rather quaint point-and-click adventure game with a focus on aesthetic quality and solvable “logic” puzzles. The game’s demo reveals very little to us, but from the outset there are a few things we are aware of. Our titular hero Lilly is a young girl, who, for whatever reason, has found herself exploring a dark, magical forest. She, alongside her brother Row, makes her way through this mysterious location with the aid of the player’s mouse clicking and puzzle solving skills. 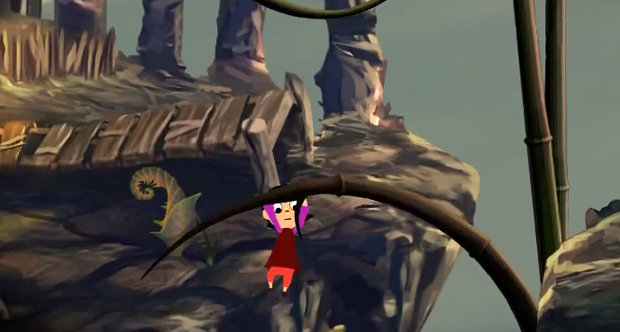 The puzzles present in the demo aren’t particularly challenging, but they serve to acquaint us with what we will encounter throughout the rest of the game. These puzzles range from simple object retrievals, object combinations and a delightful scenario in which Lilly needed to bounce across a body of water on large bubbles. By using three different levers, one must control how big each bubble was to create a small, medium and large bubble. There’s nothing too ground-breaking shown in the demo, but that’s not necessarily a criticism, since everything mechanical on show serves as a comforting and familiar nostalgia trip for fans of classic adventure games, and as a gentle introduction to puzzle solving for younger or less puzzle-savvy players.

By the end of the demo, Lilly discovers a magical pair of goggles that, when equipped, transform the area into a greener, more utopian setting than before. Although this is only touched upon briefly, the “Looking Through” portion of Lilly seems to come with world shifting mechanics that can alter the way the game world works in a similar way to games like Time FCUK and Giana Sisters: Twisted Dreams.

Truthfully, the real appeal of Lilly Looking Through is in how utterly gorgeous it looks, sounds and feels. Simply put, Lilly is absolutely adorable; a combination of Double Fine-esque character design and stellar Pixar level animation (think Costume Quest meets The Incredibles). Although the juxtaposition of a 3-D character on top of 2-D environments might sound a little confused, it actually works to great effect; emphasizing Lily’s quality animation and the beautifully grim hand painted setting designs.

Lily wanders graciously through the world with a childlike innocence and abandon that is incredibly refreshing to see, particularly when her jumps and footsteps combine with the soothing tones of the game’s original score, a score that blends perfectly with Lilly’s gameplay and visual style. If there’s one minor quibble I have with the game it’s that some of the diegetic sounds are a little tinny and underwhelming (dare I say “Sound Bible-ey”?) compared to the striking visuals and wonderful score. It’s possible that these sounds are just placeholders until the game is finished, but the difference in quality is unfortunately all too apparent.

The simple truth behind Lilly Looking Through is that it appears to have been crafted be people who care. The brief time I spent with the demo grabbed me in a way that few games do, and took me back to the simple days of my childhood. The game’s magnificent synergy of music, art and animation are touching in a way that is hard to forget, but equally difficult to articulate. That, and the whole thing is just so gosh darn cute. When the full game releases, I for one hope and expect that Lilly Looking Through will be another game to throw on the ever growing pile of engaging and thought provoking adventure games that have seen a massive resurgence in the past year.

The game has been fully funded on Kickstarter and is now waiting to be Greenlit on Steam. You can download and play the demo for free from here.