In this, the first expansion for the wildly popular online collectible card game Hearthstone: Heroes of Warcraft, players see what single-player campaign is all about. All new bosses and all new minions are free to play right now, taken straight from the annals of World of Warcraft raid lore. (Naxxramas is, for those who don’t know, a floating necropolis, the site of the infamous raid dungeon where players collected loot and quested in WoW.) 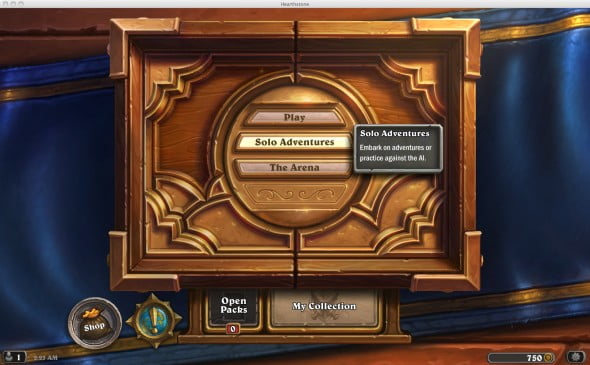 These new opponents are appareled with potent abilities, and a whole, foreign set of minions to contend with. I’ll let you in on a little secret: I kind of suck at Hearthstone. I routinely get wrecked, and at least once, I lost 20 times in row. So my review should be read with that information in mind. I am not a pro.

First off, if you’ve never played Hearthstone before and you’re thinking that tonight is the night that you’re going to check out Naxxramas, think again. To make it to Naxx, players must have previously unlocked every character from the original tutorial. That might not be time consuming if you have an idea what you’re doing. I, however, came to Hearthstone a trading card virgin. The closest that I had come to a TCG was a little second hand exposure to games like Magic the Gathering and D&D going down in the library before school. I may have played, but I didn’t play. So figuring out what I was doing took me maybe four hours total coming into Hearthstone. 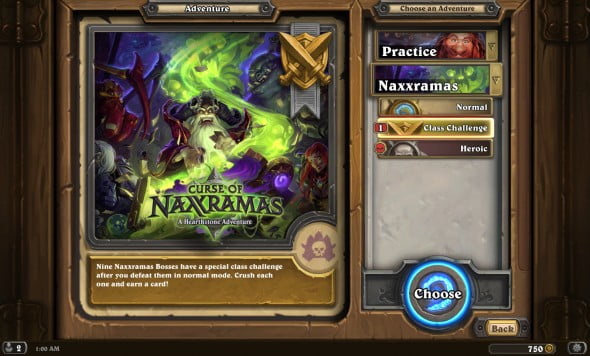 For Naxx, once you’ve unlocked all of the characters you are free to try out the new gameboard and bosses. From the main menu, your game box now offers three options: Play, Solo Adventures, and the Arena. Once players are in the Naxxramas dashboard, they can choose to practice their skills against the nine different classes, or they can select one of three Naxxramas adventures. These quest types include Normal, Heroic, and a Class Challenge (for Arachnid, these class specific challengers were the Druid and the Rogue).

Everything was polished and sleek, albeit a little buggy. The bosses are rich and lively, and it really does feel like you’re battling a boss. I didn’t know what to expect, battling AI in based off of characters that I wasn’t very familiar with in a game that I’m not a badass at. But I have to say, it was as much fun—nay, more—than as in traditional 1v1 matches. 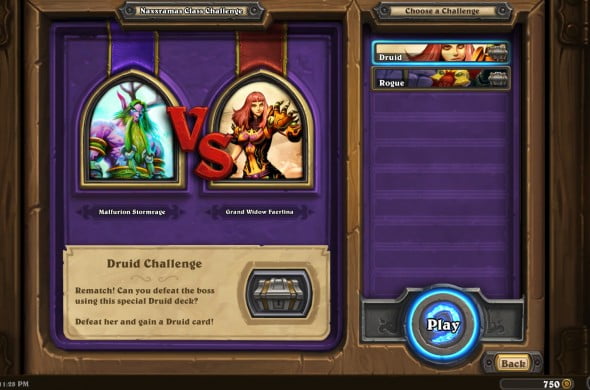 Players duke it out against spider enemies and spider henchmen (well, women…well, woman), and all to win—you guessed it!—spider related cards at the successful conclusion of each battle. Interlopers are pitted first against a spider lord, Anub’Rekahn, a seriously cool looking giant spider that I would hate to meet in a dark alley. Players choose his or her hero, just as they would in regular play mode.

Here’s the part where I want to tell you to go in with a deck that’s full of buffs or taunts or whatever, but the sad truth is, my only goal was to level up my Priest. The deck I use for him is a pretty diverse smattering of options. I recommend a deck with a decent amount of spells and buffs, and a few high health taunt cards could not hurt. 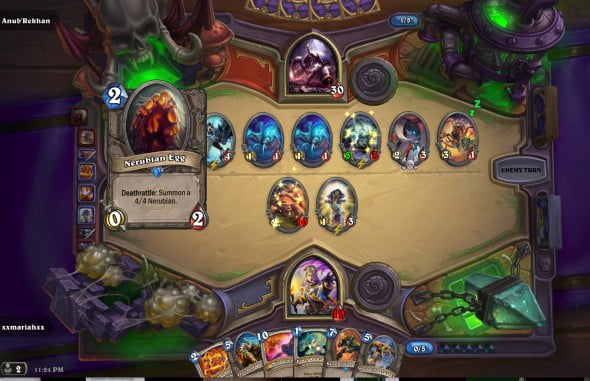 Anub’Rehkan’s hero power is to summon a 3/1 Nerubian spider. In keeping with that whole necronomical theme, damn near every card that these bosses play comes with a Deathrattle. And they’re not your grandma’s Deathrattle, either. It seemed like every time I would get Anub’s Taunts off the board, their Deathrattle would summon two 1/1 Spectral Spiders to take it’s place.

Anub looks more intimidating than he really is, though. If I could beat him with my Priest deck, most players could beat him with anything. The game board is both really cool looking and not as interactive as I had hoped that it would be. Each corner bears a creepy, sinister looking ooze pile or spider’s nest or diabolical looking totem. Likewise, card backs are more or les what you would expect from a dungeon-like dark lord arena. I made note of the fact that these card backs reminded me inexplicably of the young adult book covers for R.L. Stine’s Goosebumps. 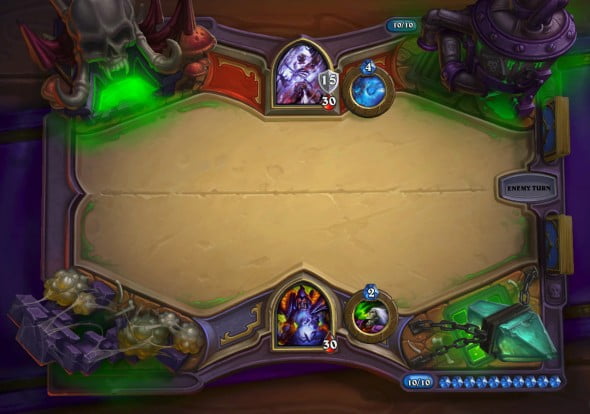 Heroic Bosses, Hearthstone warns, are extremely difficult. They will require many attempts and multiple deck revisions to beat. You’ve probably already guessed as much, but I have as of yet to beat one. I can tell you, however, that at this level bosses start out with 45 health, and their abilities seem to do additional damage but appear to cost less.

The second boss, the Grand Widow Faerlina, oversees the Arachnid Quarter and is unnervingly hard to beat. Her hero ability is called the Rain of Fire, and—get this—it deals 1 damage to your characters, as many shots as there are cards in your hand. So if you’re holding 5 cards at the end of Faerlina’s turn and she plays her ability, you’re taking five to the face. It’s kind of like the Mad Bomber, if the Mad Bomber weren’t so disloyal. This villain will take some strategy to conquer, and if any players have built a deck that’s really working out for you, I hope that you’ll share it in the comments below. 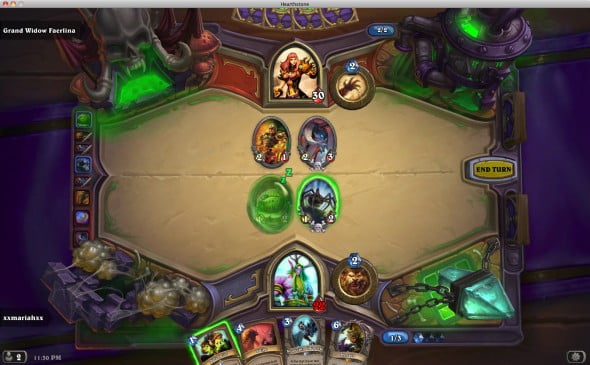 The massive Spider Queen Maexxna births endless spiderlings to feed on the corpses of interlopers, so sayeth HS developers. This boss’s ability is a three casting cost, and it returns one of your minions to your hand at random when played. One advantage to playing with the Priest, I found, was the Mind Control and similar cards gave me the opportunity to play with some of the boss cards and see for myself how I liked them. This boss is also difficult, and learning the limitations of the cards players collected before Naxxramas is a fun challenge.

Overall, Naxxramas in many ways both exactly what I had expected, and then again not quite what I had expected, either. I was impressed at the boss emotes, the continuity of the theme, and the fact that developers did not pander to weaker or new players. Naxxramas, aside from being just plain cool and a fantastic addition to the Hearthstone effort, is engaging. It provides a whole ‘nother limb to this deceptively simple offering from Blizzard. The solo campaign is completely separate and mostly equal to the other HS offerings, and seem to be the most logical next step for players who are saturated with daily quests. I can’t quite put my finger on what I feel this is missing, and so that tells me that whatever it may be is probably nonessential. Perhaps the only problem that I see with Naxx so far is that I believe it makes building expert level decks a much more appealing concept. The con to this obvious win for Blizzard is that new players who aren’t committed to HS just yet could easily decide that “buying wins” by dumping money into the freemium title simply isn’t worth their time. Beyond that, however, I have been and will continue to enjoy exploring what Naxxarus has to offer.