The Construct Quarter opened this week to Hearthstone fans new and old, revealing four new boss battles and continuing to enrich that solo-campaign adventure. In previous weeks, I have complained that things seemed a little lax. I also predicted that this week would bring a little levity to my gameplay experience that had been missing for me since week one. (My complaint? The battles in Hearthstone’s Naxxramas just seemed more centered around the story-telling and the gimmicks of each boss’s history in World of Warcraft lore than on the overall HS player experience. And that made me a sad-face panda.)

Patchwerk is the first challenger in the CQ, and he kicks things off with a 5 attack weapon that has a massive 8 durability and costs three to cast. He also has a pretty sweet hero ability, Hateful Strike, which destroys a minion for 4 casting cost. You might think that if you can just hold this onslaught at bay using taunts and Acidic Swamp Oozes for 8 turns, you’re safe. Think again. After running its course naturally, the weapon has a deathrattle which reequips the Hook hero weapon for 3 casting cost. However, Patch draws no cards. That means that his hero ability and weapon are your only challenges. I decided on an aggro-style deck with lots of low casting cost minions to just keep bodies on the board, as well as a strategy that I hate to see but which is necessary with this challenger, a veritable butt-load of taunts. I beat this challenger pleased that, despite his simple shtick, he still presented a challenge for me. I used the Mage, taking advantage of her freeze spells and variety of low casting cost minions and taunts. I urge players not to be discouraged if at first they don’t succeed:  Patch can only attack but once a turn, and once you pack the board, it’s really your game. Beat down Patchwerk to earn two Undertaker (1 to cast 1/2 cards , which gains +1/+1 whenever a minion with a deathrattle is played…yea! Totally useful in the follow-up boss battles. 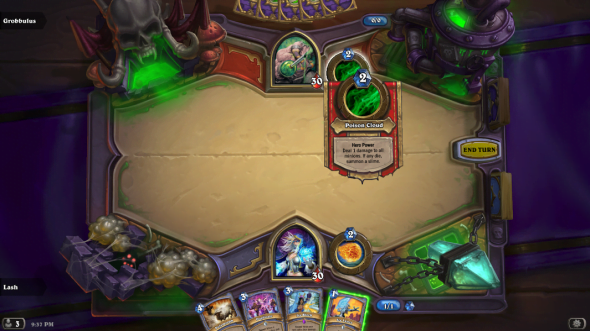 Grobbulus is up next, and his hero ability (Poison Cloud) deals 1 damage to all minions and gives him a 2/2 Fallout Slime for each minion that dies for only a 2 casting cost. This boss battle was a fair challenge. His vast collection of ooze-themed cards cast a wide net of damage and defense. Remember the Echoing Ooze from a few quarters back? And remember how, if played at just the right time, you could summon a copy of a pretty powerfully buffed minion? Yeah, you don’t want Grob to do that. The secret of this boss’s ooze is that he is the complete challenger, with no lame ducks. Grobbulus is the closest that I feel I’ve come in normal mode AI to matching wits with a real player. Lots of good fun. I used a Shaman, and later a Druid, to go at it against the second Construct Quarter boss. I’m pleased to report that this challenger was even more taxing than the first. Once you’ve Grobbed the Grob, you’ll add a set of Mad Scientist cards (2 to cost, 2/2’s) to your collection; these cards have a deathrattle that puts a secret from the player’s deck onto the board.

Then there’s Gluth, who has a 1 casting cost weapon, Jaws, that has a durability of 5, and which gains 2 attack any time that a minion dies who comes equipped with deathrattle. His hero power is kind of badass, too; it turns the health of all enemy (i.e., all of your) minions to 1. This comes in really handy when Jaws is equipped. Obviously, this means that low health, low casting cost minions will be your best bet against Gluth as well as Patchwerk. Believe it or don’t, I actually didn’t think to wipe my decks of deathrattles (which I learned the hard way do nothing but beef up his weapon); I did, however, wind up keeping in some freezing spells/minions, and I always include a few low casting cost taunts. Those things seemed to work well in my accidental, lazy aggro deck. Speaking of deathrattles and taunts, Gluth obviously was hip to his own game, playing several of these cards himself. I probably don’t have to tell you, but will because I liked the sound of my own voice, that silences and that high-utility card Acidic Swamp Ooze are your friend for this bout. Friends tell me that a Paladin deck is incredibly effective for this boss, but I didn’t try to use him myself. Because I’m mad at it. And we’re not speaking right now. Zombie Chow, a 1 to cast 2/3 card with has a deathrattle that restores 5 health your hero. 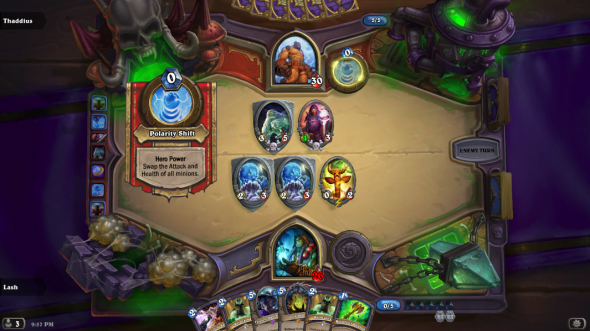 Thaddius brings it home with the Polarity Shift hero ability, a free-to-cast power which swaps the health and the attack of every minion on the board. I’m really bad at math, so this was a really intimidating concept for me at first. However, there were some cool side effects that I couldn’t have predicted initially. For example, minions with zero attack die immediately (which makes sense, I guess, since inversely that means that they have no health…another way of saying dead). I wish I could say that I discovered that on my own, but I actually know that because (as I suspect he’ll do to every player) Thaddius played that on me. He plays this hero power every turn (or at least he did in both of the matches that I played against him), so keep that in mind when you’re selecting minions. This was actually the easiest challenger of them all, so my advice here was just not to be intimidated by the gimmicks and go into the fray knowing about the inversion that is to come. Wailing Soul, a 4 casting cost card with a 3/5  is what you’ll get for your troubles, and this card silences all of your own minions when played.

Bring an end to the CQ as a whole, and you will earn these two gems: Feugen for 5 casting cost, who is a 4/7. His deathrattle is that if Stalagg also died this game, to summon Thaddius. Likewise, Stalagg is a 5 to cast 7/4 with a deathreattle that summons Thaddius if Feugen has also died in this game. Pretty cute. 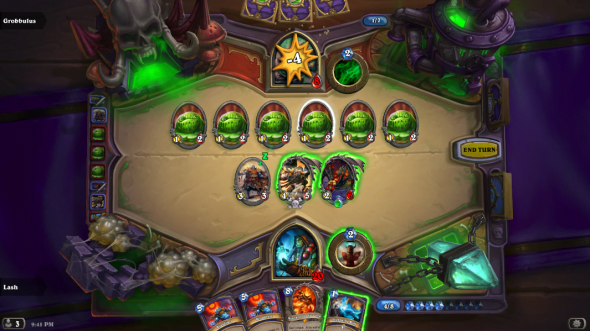 Class challenges for the Construct Quarter are for the Priest against Thaddius and the Warrior against Grobbulus. Successful completion of the challenge with the Priest will earn you a Dark Cultist card, a 3 to cast ¾ that gives a random, friendly minion +3 health. Diffuse Grobbulus using the Warrior to unlock Death’s Bite (a 4 to cast weapon with 2 durability that deals 1 damage to all minions once its deathrattle is triggered). As in previous class challenges, both heroes come equipped with pre-fab decks that–I think–make victories a pretty quick study in what developers want you to learn from testing out these new cards. I love the way that class challenges keep players all on level ground.

As in previous quarters, heroic mode is not to be trifled with. I’m still messing around with it now, so I can’t really report what works best for me and what doesn’t. It’s all just good fun so far. A great proving ground for all of those new cards that we’ve earned thus far, and good practice for facing off against Kel’Thuzad.

I can also report, although I don’t really want this to get around, that I was wrong and my beau was right. At least in this one instance, I can see where paying to unlock every quarter in Naxxramas was worth the cash. I have had to work double time to try and accrue enough gold to gain access, and this week I just did’t have enough. I coyly asked for screen shots “to compare notes,” and so you will see that Battle.net user Lash owns the victories in this review. Boo.