So…I am normally that person who assumes the best about everything. If I got shot in the arm, I would suspect that the gunman was being considerate with his aim by not connecting with my face. It is carefully, then, and with much leniency, that I can only assume that the developers at Hearthstone designed week three of the Naxxramas solo adventure challenge (the Military Quarter, for those of you who aren’t keeping count) with a raging collective migraine, as well as a dossier of complaints about what difficulty in mind. How else can you explain the consistently easier bosses and mildly blase cards earned in this week’s wing? 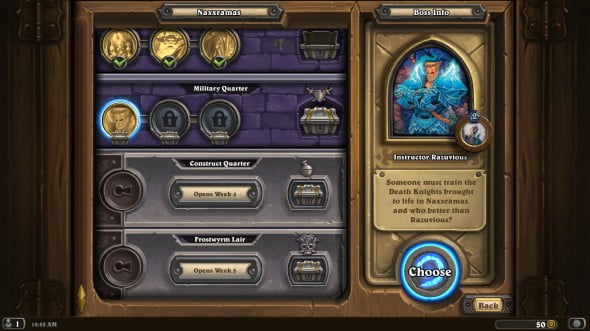 This is coming from a humble place, too. If they gave out awards for playing Hearthstone, the free-to-play and deceptively addictive collectible card game from Blizzard, I would get a medal of participation only if I beat someone else up to get it. I am not what you would call “good,” or “competitive,” nor am I particularly “strategic,” or even “competent”. None of those words really apply to me. How, then, did I beat this week’s bosses on the first try, three for three? (Five for five if you’re counting the class challenges.)

The challengers looked impressive:  we had Instructor Razuvious, who came out with a higher-than-average health of 40, and a hero ability called Unbalancing Strike. For 2 casting cost, Raz’s inherent power dealt 3 damage (not unlike Loatheb from the Plague Quarter). Players start out with a Mind Control Crystal, a 1 casting cost spell that can be used to “control the Understudies.” Once played, this card gives the player control over Razuvious’ first minions, two 0/7 Taunts that immediately–lazily?–help level the playing field against the initially daunting health of the challenger. I switched things up this go-round and tried the Hunter, because I love the Webspinner card earned from the hero challenge week one. The puffery of the two Taunts was all for show. By turn 10, Raz was no more, and I’d earned Dancing Swords, the 3 casting cost rewarded for defeating The Instructor. This card has a Deathrattle which allows the opponent to draw a card. (In playing this over, I let Raz keep his Taunts and buff them for another variation on the already-quick victory…that was fun. I recommend giving that a go.)

Challenger Number Two, Gothik the Harvester, has an aptly named Harvest ability that, for 2 casting cost, draws a card. Since I’d already flipped the script (abandoning the Priest deck that I’ve been haphazardly using since week one), I decided to play the Paladin against Gothik. The coolest thing about this challenger was his ability to reanimate his destroyed minions on the challengers side of the board. Every turn, even though these minions can be granted attack and used to deal damage back to Goth, they come to players as specters that also deal 1 damage to your hero at the start of every turn. Sounds like this hero, who starts at 30 health, should have a decided advantage when it comes to board control, right? I know. That is what it sounds like. Tell that to my weak-ass Paladin deck that wiped the board against The Harvester by turn nine. (Some Taunts would have really helped out your ol’ boy Goth. Conversely, a Shaman deck that sports more than one Bloodlust–which buffs the attack of every minion on you board for just one turn–would have also been a good thing to have brought to the table.) I got a kick out of Kel’Thuzad (the little Crypt-Keeper-lookin’ fella that continues to narrate the player’s journey through Naxxramas. His outro after defeating Gothik the Harvester was: “Why doesn’t Gothik come back as Spectral Gothik? C’mon!!” Beating this character earns players a Spectral Knight card, a 4/6 with a 5 casting cost that can’t be targeted by spells or hero powers.

The Four Horsemen were another group of pretty cool looking challengers, and got my attention right away with the higher-than-usual casting cost hero ability (5 casting cost), as well as the lower-than-average health of the opponent (which was a 7 with the immunity halo). The Baron’s hero ability was Unholy Shadow (which draws 2 cards for Baron Rivendare),  and Rivendare starts off with three minions on the board (the other three horsemen), each a 1/7. The Mad Bomber, who usually f’s me hard, was all-in for me tonight, helping me end two of the horsemen by turn three. I don’t really have any more notes about this challenger, largely because the Baron, too, was defeated by turn nine, earning me a 3 casting cost Deathlord, a 2/8 with Taunt and a Deathrattle that pulls a minion from your opponent’s deck out onto the battlefield. Defeating the Baron Rivendare will also unlock a card of the same name, a 4 casting cost 1/7 horsemen to remember the Military Quarter by, which allows minions to trigger their Deathrattles twice. 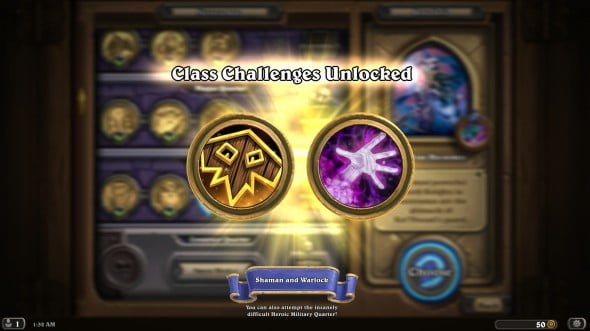 The class challenges for Naxx’s Military Quarter involve the Shaman (who I am really into this month, for whatever reason) and the Warlock. Surprise, surprise, the challenge concluded for me by turn 7 or 8, betraying what I would call a recurring theme for the MQ. Reincarnate was the card players unlock by completing this challenge, a 2 casting cost card that destroys a minion only to return it to full health. (Can you say “Shadowstep”?) The implications for my beau are strong, since he’s one of those a-holes who has a thick legendary deck. He’s looking forward to using Reincarnation plus LeRoy Jenkins to help facilitate users smashing their keyboards all around the northern hemisphere this upcoming week. The Warlock challenge against The Baron was over just as quickly as those that came before it. I earned, for my efforts, a 3/4 Voidcaller for a 4 casting cost; the Deathrattle on this card puts a random demon from your hand into the battlefield, and will obviously work well in Warlock decks.

Heroic challenges continue to be much more engaging than initial battles in Naxxramas (for me, at least). Raz’s Unbalancing Strike changes to a 1 casting cost and does 4 damage in this mode; he starts out at 55 health. This challenge was the caliber I was expecting from the whole wing. Massive Runeblade, which doubles the attack of the hero’s weapon, ended the battle before it ever began without those Understudies. Had to re-craft a Taunt-heavy deck with Swamp Ooze to beat this one. Gothik’s hero power becomes auto-cast in heroic mode (meaning that, for 1 casting cost, it must be used every turn). In addition to being cheaper, it also gives Goth an extra mana crystal every turn. He starts this match out with 45 health, and wrestling for board control is a real effort against a hero who has double your mana every turn up to five. However, I am happy to say that it is do-able. The Baron’s  horsemen begin their heroic match as 2/7’s, and the hero’s health is doubled in addition to his immunity (making his health 14). Heroic challenges took me a considerable number of do-over’s to dominate, making them the highlight of my Military Quarter Naxxramas adventure.

I find myself asking why the opposing heroes have bitched up so considerably in the challenges following the Arachnid Quarter. My MENSA brain trust has speculated that this is all, as I mentioned briefly earlier on, in response to whining generated from the vagi**s having trouble chopping down challengers in earlier quarters. We believe that week four will cowboy up and raise the difficulty ratio about 35%. That has to be it. There are simply so many brand-spanking new players that have been garnered specifically during this campaign for Naxxramas that, if every new player was swept away in how confusing adventure mode is, the whole Hearthstone community would suffer. I think. I don’t know. That’s my guess.

Overall, the only reason to be disappointed with the Military Quarter (or any other quarter, for that matter) is because players find themselves paying for access. Whether it's real monies (which my hunny forked over weeks ago because, unlike me, he doesn't like investing hours upon hours to earn admission) or the 700 points required to belly up to the gameboard for the solo adventure, players expect more than the average Hearthstone experience from this solo adventure campaign. I am to be counted among them. However, it's not like this is Diablo, here. We aren't out any more greenbacks than an evening of aggressive crane machine playing at Denny's would cost, and that's something I reminded myself of while trying to place the newly earned cards in my deck from this week. (Plus, I suck at the arena, so no matter what, I'm pretty satisfied with the handful of specialty cards that playing in Naxx earns me.) Was this the best quarter, in my opinion? No. Do I hope that the ante is upped, just even a little? Yes. But overall, I'm still playing Hearthstone longer than any other game of the year. And that's still something to write home about.