Whether you agree with their Kickstarter fundraising campaigns or not, Double Fine as a studio has earned the right to dodge traditional publishing in order to get their games made. This is because their games usually rise above the majority of the re-packaged and regurgitated guff that spews from within the unstoppable sequel machine that is the AAA game industry. Tim Schafer and Co. understand that creativity, originality and a strong artistic vision are the foundations upon which all games should be created, and their $3 million dollar raising adventure giant Broken Age is no exception.

Luckily, Broken Age brings with it the same child-like playfulness that sits at the very heart of Schafer’s  LucasArts titles, as well as his teams other hits from the last decade. It also brings vibrancy, wonderful characters, and some of the best world building I’ve seen in a game in years. Although it may only be half way done, Broken Age is already a wonderfully whimsical game which sets a new standard for comedic storytelling in games. 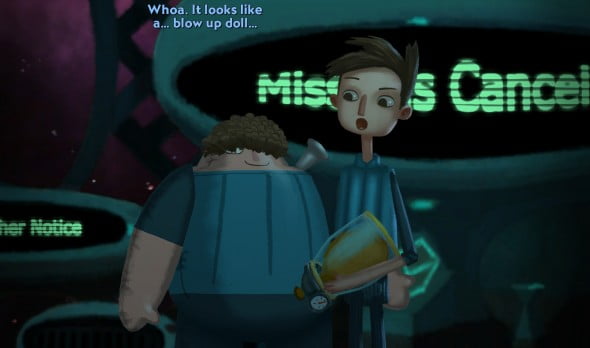 Broken Age is split into two coming of age, sci-fi/fantasy stories each with its own themes and ideas to explore. One story follows Shay, a teenage boy who dreams of a life of heroism and daring rescues aboard his spaceship. The only problem is, his spaceship is controlled by an overly attached “Mother Computer”, who will only allow him to embark on safe missions like Ice Cream Avalanches and runaway toy trains. After being molly-coddled for far too long by his computerized parents, Shay decides to take control of the ship himself, with the help of his mysterious, furry friend Marek. What follows is a hilarious and exciting tale about the dangers of over-parenting, one which deals with its overarching theme subtly without ever tearing you away from its own sharp and witty dialogue. When Shay is ripped from his comfortably mundane world of breakfast cereals and hugs, his naive and idealistic nature becomes apparent.

The other story, which the player can switch to at any time if they get stuck with Shay, follows Vella, a teenage girl who is forced to partake in the “honorable” traditional of human sacrifice. Her home town of Sugar Bunting places her and four other Maidens at the mercy of Mog Chothra, a huge beast that would devour the entire town were it not for these sacrifices. Vella decides that she would rather fight Mog Chothra than offer herself up willingly, and escapes the Maiden’s Feast, embarking on a new journey to kill the beast. 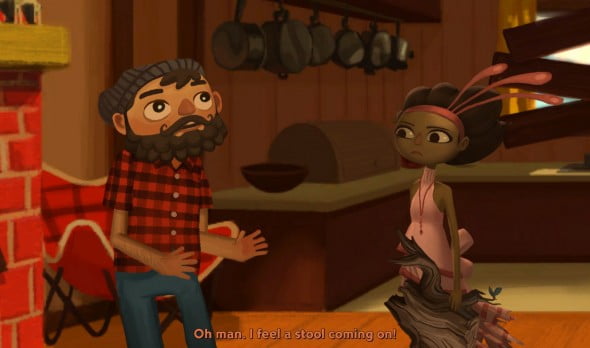 Although Vella’s story isn’t as plainly funny as Shay’s, it offers up some fantastic world building – placing itself firmly somewhere between Adventure Time‘s cute, surrealist fantasy locales and Futurama‘s irreverent, sci-fi humour (it certainly helps when many of those show’s regulars show up and deliver wonderful performances). In fact, I’d even go as far as to say Broken Age features the best writing I’ve seen in a Double Fine game to date, and some of the best adventure game writing of the decade so far. It’s almost as if Broken Age takes the best aspects of Double Fine’s previous games and throws them into a vibrant, fantasy universe.

The only problem with Broken Age‘s story is simply that it is itself broken. Since it is being released in two parts (although admittedly with only one payment necessary), Act 1 is mainly set aside for world building, and a small amount of character development. That’s not to say these things aren’t done excellently, but it’s clear by the act’s conclusion that Act 2 is going to feature most of Broken Age’s hard-hitting stuff. Everything is set up perfectly with a delicious cliffhanger, there just isn’t a ton of narrative movement on show in the first Act. 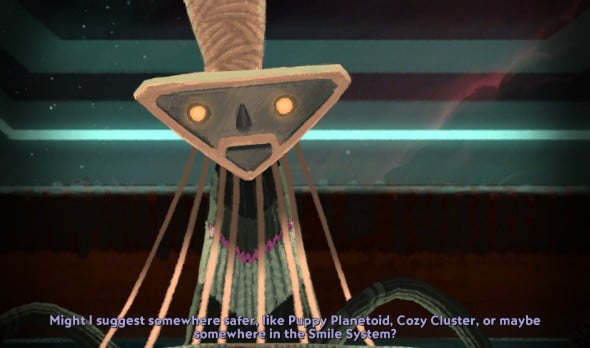 Mechanically speaking, Broken Age is a Tim Schafer adventure game. It has items you collect – sometimes you combine the items, sometimes you don’t – and you use these items to solve puzzles and advance the game’s narrative. Most of the puzzles are fairly easy, and don’t stray too far away from conventional adventure game “logic”; although when the occasional tough puzzle is thrown in it can feel slightly at odds with the rest of the game’s easy going nature. Schafer has seemingly monitored the behaviour of adventure gamers, and has prepared for nearly every eventual item combination a player might try in a desperate attempt to solve puzzles; most item combinations and interactive objects trigger unique voice acting, making things seem a little more real than in most adventure games.

Even on a superficial level, Broken Age hits everything home. Its art style is simply gorgeous; its quirky, crayon style perfectly evocative of the game’s themes of escaping tradition and authority. Its soundtrack is a beautiful, sweeping score capable of riveting anthems as well as more subtle, quieter motifs. Its voice cast is one of the finest assembled in recent memory, featuring brilliant performances from gaming legends like Jennifer Hale, film stars like Jack Black, Elijah Wood (who delivers a very understated performance as Shay) and TV and animation favourites like Pendelton Ward, Hynden Walch and Wil Wheaton. All of these factors help Broken Age to craft its world and characters excellently, forming people and places you want to be around for as much time as possible. 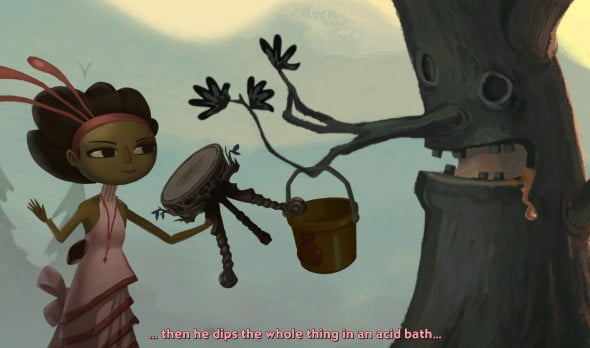 Its art is gorgeous, its story and world is creative dynamite, its characters are flawed and compelling, its dialogue is hilarious. Truly, Broken Age is an endearing experience, one which sets a new bar for comedy in games. Although its emotional punch doesn’t yet rival that of say, The Walking Dead, its gleefully cute and silly world is timeless, relatable and just really, really fun. Tim Schafer and the team at Double Fine have crafted a fantastic adventure game, one which calls back to the genre’s classics, whilst also bringing new ideas to the table, as well as that al important £3 million dollar polish.

Another triumph for adventure games; if you’ve ever even thought about buying/enjoying an adventure game, Broken Age is a must-play. Experiences which deal with real life, “mature” themes are hard to come by, as too are games that do them justice. Broken Age is one of those games – a proud, sugar coated middle finger in the face of mediocrity.