As GIZORAMA’s resident “barnyard gamer”, it seemed like a natural progression when Full Bore fell into my lap (well it didn’t fall into my lap because it’s a digital game, but I digress) after my time spent playing games about horses and goats (x2). The joke behind Full Bore‘s name is twofold: you control a boar, and you have to bore down into the Earth an partake in terrain manipulation and block puzzles. Were Full Bore a less accomplished game, its name might come back to bite it in the rear, but thanks to some fairly solid puzzle design and a great concept, Full Bore manages to rise above its messier moments and avoid becoming a “full bore”. “Slight bore” may be more accurate though.

The terrain in this 2-D block puzzler is effectively divided up into three types. There’s terrain you can push to open up new avenues for exploration, terrain you can destroy (to open up new avenues for exploration), and terrain you can walk on (to open up new avenues for exploration). There are variations on these types to be sure; sometimes you can push battery blocks into lasers (to destroy more terrain to open up more avenues for blah blah blah), and some terrain can be destroyed a little more easily than others, but for the most part Full Bore takes its concept and sticks with it. This can occasionally be rather problematic when trying to figure a puzzle out. There are various different sprites for blocks and terrain types, but most of them basically do the same thing. Sure, Full Bore wants you to explore and figure these things out, but that doesn’t amount to heaps of fun when the outcome is always: “I dug a different shade of dirt/gravel”. 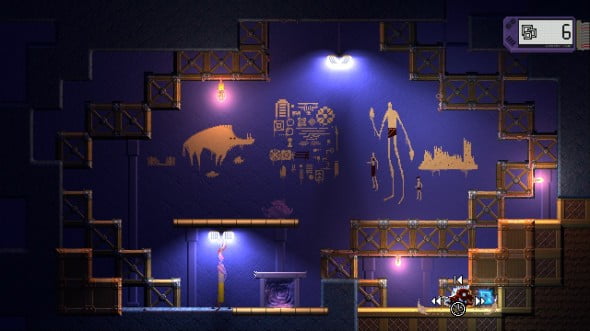 One of Full Bore‘s main issues is its lack of a reward or significant pay-off. The main objective of this mass boar digging frenzy is to collect gems and find new places to explore, but the amount of digging and arduous backtracking one most undertake to get to the gems rarely feels worth it in the end.  To make things worse, Full Bore’s map is utterly useless, since it shares the game’s 16-bit pixel art style and can’t zoom in far enough to actually let you get your bearings. There’s a reason why maps in the real world aren’t created using pixel art.

Add to this the lack of available fast travel services and some rather large vertical levels and Full Bore becomes a cocktail of back-tracking and squinty map-reading, once again leaving the player to ask the question: “is this really worth it?” The  disappointing thing is, Full Bore occasionally throws up some well realized and accomplished puzzles. There’s never anything particularly ground breaking on offer, but every puzzle is solid and creates enough intrigue for the player to want to dig a little deeper.

If the game was a series of linear puzzle rooms, it might actually work a lot better. Instead, it shares the same problems Teslagrad had; everything feels messy and direction-less. One never really knows where it is they’re supposed to be going or why they have to go there. You’ll pass by boars who will throw meaningless monologues your way, but none of it really means anything or has any bearing on the game. You’re basically encouraged to explore “because gems”, especially because the discovery of new terrain never really excites you after the third or fourth time. 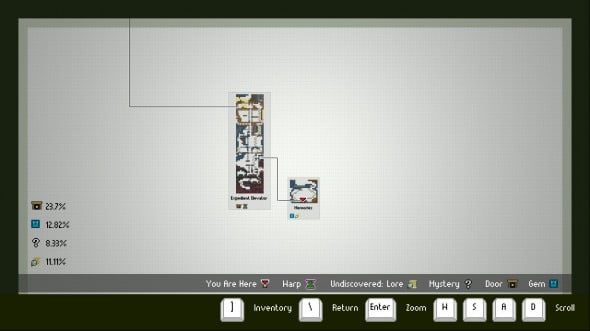 Full Bore‘s world is at least visually well realized, aside from the occasionally confusion over the purpose of certain blocks. The game’s pixel art and animation is all very good, though the game’s odd funk-rock soundtrack become repetitive and grating rather quickly. Controlling the boar can also occasionally get a little ham-fisted (bad joke intended), particularly when trying to climb structures or navigate difficult environments. Full Bore‘s saving grace comes in the form of a time reversal mechanic, whereby the player can effectively erase any mistakes they’ve made (i.e. by digging the wrong patch of dirt or moving a block into the wrong place). Though this tool is useful for cleaning up errors (both made by the player and the game), it never offers anything in the way of interesting Braid-like time travel puzzle mechanics. 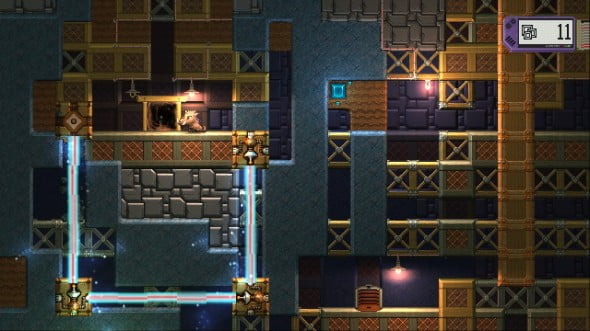 In the end though, Full Bore offers up some decent enough puzzles and manages to be a solid  game, but it’ll never capture anyone’s attention for long. There are tons of indie puzzle platformers out there with better puzzles, better music and tighter exploration mechanics, and unfortunately Full Bore never comes close to the heights of an Escape Goat 2 or a LIMBO.

With a dodgy map, difficult terrain and a general lack of direction, Full Bore involves a lot of backtracking and very little reward. Unfortunately, some well designed puzzles don't redeem the game enough for it to be worth recommending.