It’s sometimes easy to forget that the Free-to-Play pricing model was once a promising way for developers to make a ton of money, whilst still providing quality free content. Travesties like the recent Dungeon Keeper reboot have adopted the far more sinister Farmville-esque pricing model wherein players pay real cash to avoid waiting for something to happen in-game. In fact, the few games that aren’t abusing the F2P model are shooters – Blacklight: Retribution and Team Fortress 2 being some of the more successful examples.

In many respects, Edge of Reality’s new Free-to-Play MMO shooter Loadout unapologetically rips  pages from Team Fortress 2’s gospel of free, chaotic, gun-porn carnage. That’s not to say Loadout is a cynical aping of Valve’s popular shooter, rather, it is a  fresh and frantic take on the MMO shooter that breathes new life into the familiar. 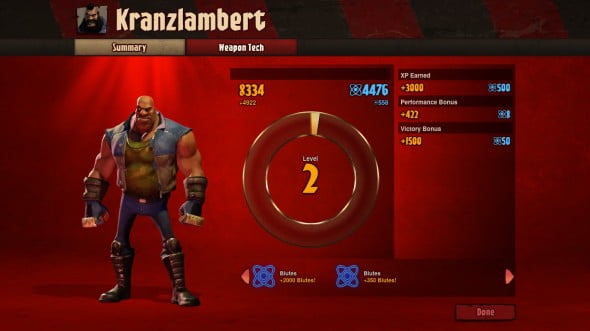 Before we delve into the core of what makes Loadout a fun time, I should briefly explain just why the game gets the Free-to-Play model so right where others get it so wrong. It’s fairly simple – at the outset of Loadout, everyone is equal. After several hours of playing Loadout, experience aside, everyone is equal. There are no sleazy, “Pay-to-win” mechanics whereby one can pay real world money to one-up their opponents. Items that can be bought in the game’s store are purely aesthetic; goofy afros, over-sized, novelty T-shirts, and of course, hats. It’s a laughably simple concept, but by crafting an entertaining and addictive shooter, players can support the game by spending a little bit of cash on customizing their outrageously silly characters, keeping the player base alive in the process. No gross money grabbing tactics or invasive micro transaction adverts – just a fun time with big guns and silly hats.

The same simplicity extends into Loadout‘s aesthetics and mechanics too, though that’s by no means a criticism. The game puts two teams of players into a grimy, cartoonish arena wherein they proceed to shoot each other with a collection of heavily customizable guns. There are a handful of  game modes that slightly subvert those already familiar to anyone who’s played a shooter in the last ten years. There’s Blitz, a variation on King of the Hill, Death Snatch, a kill and collect game similar to Call of Duty’s Kill Confirmed, Jackhammer (similar to Capture the Flag but with Halo‘s Gravity Hammers), and Extraction, wherein players collect “Blutonium” crystals and deposit them into designated grinders. This all might sound tediously familiar, but Loadout brings enough of its own charm and silliness to avoid ever feeling stale. Rather than retreading ground, Loadout is repaving it with crazy paving. 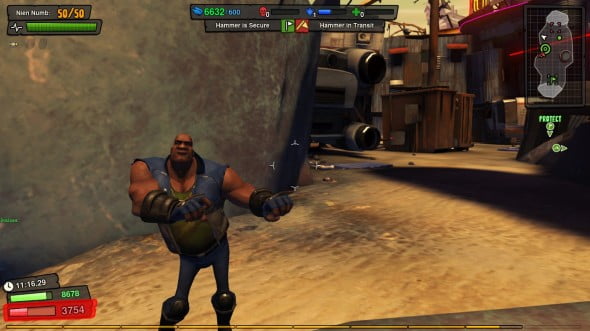 Combat is never a straight forward aim-shoot-hide affair like in so many other shooters. Players can leap demonstrably high into the air, making map traversal about as fun as the inevitable kill/death it might lead to. Since taking cover is essentially out of the question, Loadout is more of a strafing and rolling affair, making for fast paced and intense encounters less about reflexes and more about speed and accuracy.

Loadout‘s marketing touts its weapon customization suite as one of its defining feature, and it is certainly an impressive tool kit. Players can create a multitude of gargantuan killing machines with different scopes, barrels, ammo types etc. This means no one is ever really playing the same game; I favoured a spooling Tesla/Beam cannon and a 2-round burst assault rifle, but even after a few hours of play I encountered a vast array of launchers, rifles and less easily definable weapons. By performing well in matches, one can upgrade and unlock new weapon mods by spending XP and Blutonium – once again, the skill tree is nothing new, but it’s solid and makes for balanced play that rewards hard work. 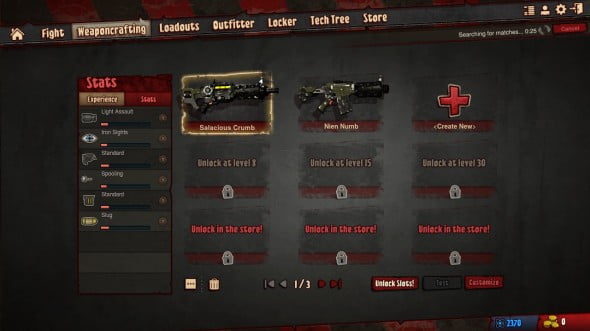 As good as its central combat mechanics and customization are, where Loadout really shines is through its inherent silliness and overwhelming determination to never take itself seriously. When players are shot, they aren’t greeted with jam splashes or burly grunts – rather characters squeal like idiots and sustain comically overblown injuries. Throughout matches, you’ll often see injured players missing heads or entire leg muscles, bloody fountains having replaced their limbs. This buffoonery is present everywhere in Loadout; the overly buff/fat caricature avatar’s, the dancing and taunting, giving someone the finger before drawing your last breath. In fact, this adherence to an overarching comical tone eliminates a lot of the frustration one might usually find in multiplayer shooters. It’s a lot harder to get mad at characters who resemble the adults from Tom and Jerry than gruff and burly army dudes.

If there’s one real complaint I can level at Loadout, it’s that its characters seem purposefully limited. There’s the buff black guy, the buff white guy, and the fat woman. I might be coming across as crass or simplistic, but that really is it. You can pay to extensively customize their outfits, but their bodies will always remain the same. This is probably a hit marker issue, but a grotesquely skeletal character might not have gone amiss. In fact, looking at the same three characters with a different lick of paint is one of the few places where the game ever gets a little tiresome. 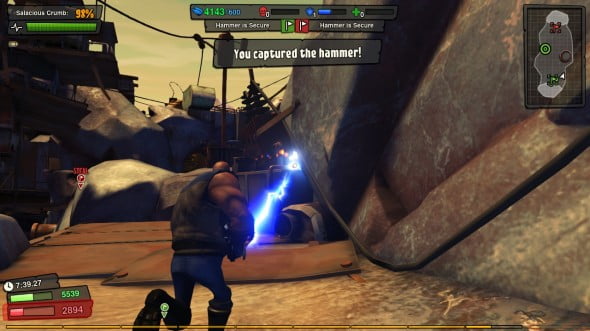 Loadout is pretty hard not to like. It’s big dumb fun; elegantly simplistic design mixed with cartoonish visuals and a comical tone. It’s hard to get me to play shooters these days, let a lone a shooter with a F2P pricing model, but Loadout nails just about everything I’d normally have issues with. It looks great, it plays great and it’ll probably make you laugh too. It’s hard to put a price on that.