Over The Top Tower Defense brings whimsy and humor to the tower defense genre in a fun, light-hearted and tongue-in-cheek affair that is delightfully unrefined. (For fans of the darling, sharp and equally enjoyable Thumbzilla, also from SMG, you already know what I’m talking about.)

Some time in the future, in a world where human or humanoid civilizations are plugging along smoothly with no wars, no unrest, and no need for society’s keepers of peace. Things are going way too well. The relative calm of humanity has led to a decline in prosperity, leaving soldiers begging in the streets. Thank our stars, the Hero Corporation is here to save players from a world in which everything is just far too hunky dory. 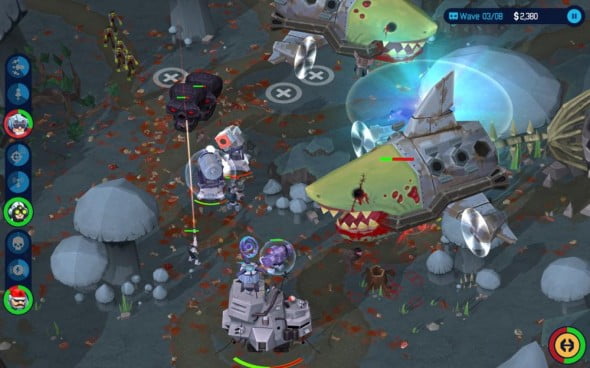 Defense specialists at Hero Corp. offer soldiers a way to defend Earth from foreign threats by doing a little preemptive recon and enemy suppression. And how do you do that? Why, by showing up to alien worlds and making sure that they don’t get any crazy ideas about rising up, of course. By pulling out your guns. Mission control at Hero Corporation sets players up with a headquarters on the alien planet, arming players with comically simple instructions: don’t lose your base, or you lose the game.

Over the course of 25 levels, gameplay follows a very tried-and-true formula for success:  work your way through the throng of local alien life and kill, kill, kill! We’ll show them what happens when you let us come onto their planet and not-kill-us before we kill them. Briefings remind players, lest they forget, that it’s all in good fun as you mow through schools of sharks strapped with Gatling guns, build and maintain  towers and headquarters, and get paid for the carnage you collect.

Your characters look like a tricked out Bob-the-Builder-Terminator in this fast-paced and surprisingly vast game. Waves of enemies come with a “Bring It” countdown, and the onslaught comes on over desolate wastelands, beachfronts and even some adorable little cemeteries. The barrage of alien targets are as diverse as the environments are cheeky, and this game is nothing if not clever. “Is that an increased health bar,” an upgrade in your crew’s skill tree reads, “or are you just happy to see me. The enemies are a fun spin on the concept of aliens, as well, with a few ghosts, some cretaceous and aquatic Rambos, and mutant turtles (but not those mutant turtles…these ones are called Wartoises, and they amuse me to no end). 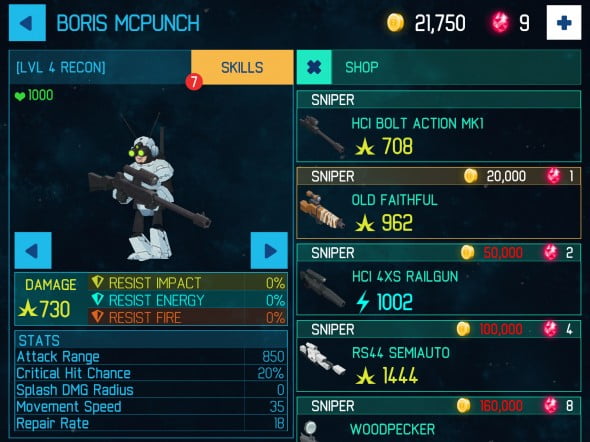 Speaking of skill trees, these exist both for tower defense turrets as well as the hero and your crew members. Killing enemies accrues points and monies for with which to upgrade weapons and characters alike. And your minions have a pretty impressive stat and upgrade system, not unlike the robust upgrades one might see in an RPG. There are seven classes of characters, 40 passive and 30 active abilities, and 30 weapons to choose work up to in OTTTD.