High Scores is a series wherein Liam analyses/gushes about his favourite modern videogame soundtracks. His musical “qualifications” include a GCSE in Music, an A level in Music Technology and a song he wrote about that pirate lady from Dragon Age II which will never be released on the internet.

Although game composers have become more prominent figures in recent years as the process of developing a game has become less of a secret to the public at large, very few of these composers have managed to reach legendary status. Marty O’Donnell and Jeremy Soule have lent their skills to huge franchises like Halo and The Elder Scrolls, but even they have yet to reach such God-like levels of fan adoration as one Nobuo Uematsu, lead composer for the better part of the gargantuan Final Fantasy series. Although he left Square Enix in 2004, he still composes regularly for games, and his most iconic soundtracks have left a lasting, unshakeable impression on the gaming world. One could even make the argument that Final Fantasy soundtracks have been significantly lacking in catchy anthems or infectious battle tunes in the ten years since Uematsu’s departure.

Such was the power of Uematsu, his emotive music could essentially make you ignore an awful lot of the rubbish that was mixed in with the genuinely great aspects of Final Fantasy. As long as you had some colourful characters, half decent battle mechanics and that all important soundtrack, you could forget about dodgy voice acting, odd writing and entire sequences which seemed to make no sense at all. You could pick any one of Uematsu’s FF soundtracks and uncover myriad gems of J-pop, classical and, occasionally, metal, but I decided to go with my favourite Final Fantasy game (this is where you either hug me or hit me), and one of the first games that really resonated with me on an emotional and artistic level at a relatively young age. In this edition of High Scores, we’re delving into the musical world of blitzballs, John DiMaggio and Sin.

FFX kicks things off in fine form with what is, in my mind, one of the finest pieces ever composed for a videogame. A far cry from the bombastic Zimmer-esque, Germanic marches of so many fantasy games or the tiresome nu-metal shoe-horned into most first person shooters, “To Zanarkand” is a subtle and tragic solo piano piece, one which eloquently sums up the ultimate tone of the entire game in about three minutes. As Tidus gazes out into the horizon and his friends sit around the camp fire, he compels us to “Listen to [his] story. This may be our last chance”, as “To Zanarkand” floats beautifully throughout the scenery. I was absolutely captivated by this scene from the moment I saw it. Who are these strange characters? What is this strange place? PLEASE can I get married to this incredible music?

We then find ourselves in the bustling neon metropolis of Zanarkand itself, as pulsing, electro-pop rendition of the original Final Fantasy theme plays. Although this is one of the weaker portions of the game, it sets up the game’s psychedelic mystery in a reasonably digestible fashion, and also introduces us to blitzball and some of the soundtrack’s main motifs. The first of these is “Tidus’s Theme“, a hopeful tune which perfectly encapsulates the naivete and upbeat attitude of our main character, who, despite all of my best instincts telling me I should, I cannot bring myself to hate. Try as you might, you will not be able to listen to his theme without a smile creeping across your face, particularly when it’s repeating throughout the game in various forms, most notably in “Blitzball Gamblers“, which sounds exactly how you’d expect a Final Fantasy version of a sports theme to sound. 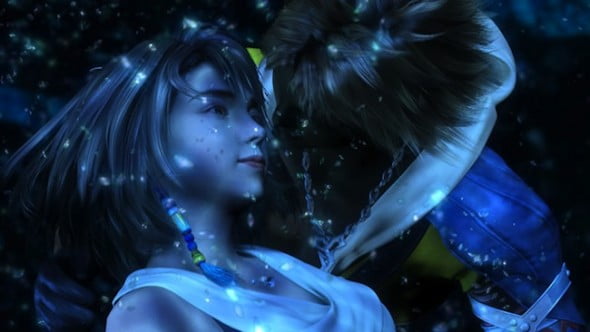 We then move into altogether darker territory, as Sin and Auron arrive on the scene and Zanarkand becomes fish food. No matter, because accompanying this literal wave of destruction is “Otherworld“, a pounding mixture of chugging, industrial riffs, gravelly vocals, and tasty guitar solos. It’s a common misconception that this track is performed by Rammstein (it’s not hard to see why; it’s different to most of the music in the game, and Square Enix have been known to hire famous artists to contribute music to their games), but it was actually composed by Uematsu’s metal band The Black Mages (did I mention how adorable this guy is yet?) and vocalist Bill Muir. “Otherworld” transitions Tidus from a world of fame and renown, to one of danger, mystery and, for now, isolation – as he puts it: “Out of the frying pan, and into the freezer”. As he finds himself cold and alone, our accompaniment becomes more ambient and mysterious.

Then comes the all important battle theme, a key aspect of any JRPG, particularly those with some form of turn based combat. A theme that will be heard by the player roughly fifteen times an hour in an 80+ hour game needs to feel just as fresh at the end of the game as it did at the beginning, and it also needs to give even the most dedicated pacifist the uncontrollable urge to beat up magical wolves and partake in an 80s training montage. Boy did they nail this battle theme. It starts of big with a thunderous fanfare before settling into a quieter, more intense variation of said fanfare for the bulk of the battle. This is all topped off with the staple FF victory fanfare (sing it if you know it). 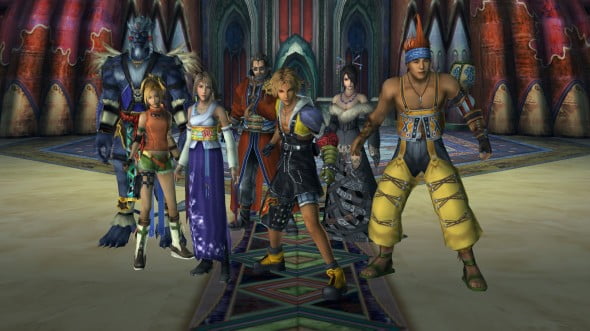 There are so many classic tracks on the FFX score that I’d need at least four thousand words to do them all justice. I don’t have the time or liquid spouting body parts to gush for that amount of words, and I’m sure you don’t have the time to read it either. Highlights include “Besaid Island“, and its rippling, wave-like soft keyboard sounds, and the brassy, foolish “Cantina Band” of the game: “Brass de Chocobo“, but the real strength of FFX‘s music is not in its one off pieces, but in the recurring motifs which pop up throughout. I’ve already mentioned “Tidus’s Theme”, which crops up fairly regularly, but I can’t go without mentioning greats like “Suteki da Ne“, which generally shows up when a character overcomes adversity or builds towards triumph. Even “Seymour’s Theme“, which, while it’s not “One Winged Angel”, is so blood curling-ly evil it’s a wonder any of Tidus’s party ever considered that he wasn’t a villain. Undoubtedly one of the most memorable motifs is the “Song of Prayer“, which crops up in relation to each Aeon Yuna can summon. This solemn yet beautiful hymn brilliantly reflects a society of people whose faith is almost entirely fear-based.

Uematsu composed the FFX soundtrack with the assistance of Masashi Hamauzu and Junya Nakano (both of whom composed for Final Fantasy XIII) and their contributions can certainly be felt in the vast array of differing styles and genres on show in the game. Metal, J-pop, classical, electronic, rock and ambient pieces blend and contrast with each other, but they all feel like part of the same chaotic epic. One thing I haven’t mentioned yet is the OST in relation to its newer, flashier HD counterpart. While these newer versions are undoubtedly more polished and objectively “better” than the originals, the innate “MIDI-ness” of the 2001 versions is part of what gives them their charm. Such were the times that three men could compose four hours worth of music for a huge, expensive game, and still they had to record 90% of it on tinny virtual instruments. Still, I think the strength of the original OST’s composition and arrangement outweighs the weakness of its production quality. 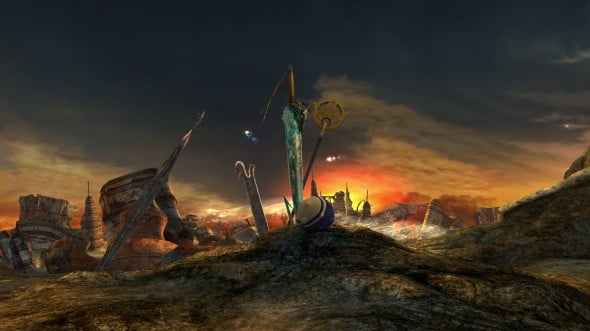 For me, the FFX OST is a “High Score” not just because it perfectly captures the tone of the game and its individual moments (that goes without saying for a composer of Uematsu’s stature), but because it set a benchmark for AAA soundtracks, one that I’m not sure has even been surpassed to this day. The raw creative prowess and mastery of genre on show here is simply staggering to behold, and it culminates in a score which is as beautiful and unforgettable as they come.