“It might surprise you that we’ve not purchased a new car, let alone a new television set” – Brian Comer, CEO of Monochrome LLC.

A zombie FPS funded by Kickstarter, there must be something that makes this one different, right?

It’s been a year, and Monochrome LLC has brought Contagion close towards its final state. It features smooth controls, barricading and playable zombies. Landing a headshot on your undead friends is rewarded by a satisfying splash of gory-brain-bits, and your skill decides how common the former is. But that’s not enough to stand out. We’ve already got Call of Duty: Zombies, Left for Dead and Dead Island, just to name a few.

Contagion is struggling to burst its rotten arm through the pile of forgotten zombie games. It tries, by bringing new and known features to the table, like the ability to play a zombie after death and a dynamic mission generator. In every round a different pathway is closed off, by a  fire, a chain-locked door, or a remote switch. It makes the progression less of a grind, and more about finding for the right tool for the job. The normally uninteresting chore of looking for your keys suddenly gets tense when a zombie horde is breaking down the doors behind you. 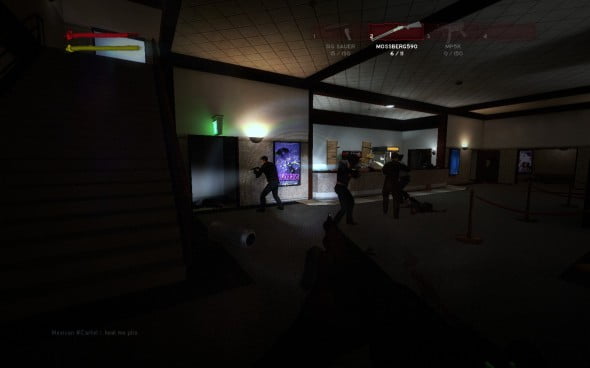 The all-covering mode in Contagion is the gamemode ‘Extract’. This is the game mode in which all of the game’s features are combined in large maps. Being dropped unprepared into these maps might be a little startling at first. To view your objective, you have to pull up your smartphone, and even then, you will find yourself lost more often than not for the first few rounds. This is a good thing though, danger can come from everywhere and it keeps you on the edge of your seat.

You can run from the everlasting threat, but you can’t hide. Zombies, controlled by either players or AI will eventually find you. You can dig in at a boarded-up house, but only until the clicking of your weapon announces your shelter’s expiration. Then it’s off to dodging shamblers in the streets again.

To live as long as possible (note: you will not survive) amidst the undead horde, it is key to stick together. Games have been advertised like that before, but no other zombie FPS puts as much emphasis on teamwork as Contagion. Keeping each others back will often double your tiny lifespan.

There is a trade-off in sticking together though. After being victim of a zombie bite, your vision will blur and twitch, as the lust for fresh brains grows. You might hear your teammates shouting: “ARE YOU INFECTED?!” over voice chat. When you do, you are the one to decide: let your teammates shoot you, charge into your heroic undoing for one last melee rage, or quietly wait it out and eat your buddies alive.

Ammo is scarce and your main drive to complete objectives. Teammates can both be your shield and the sword (or in this case zombie teeth) of your undoing. Barricading a hideout containing some supplies can give you a breather, but if the wave overwhelms your defenses, it might suck you in and spew you back out as a zombie.

Contagion does things that set it apart it from any other zombie game out there, and that is what makes it’s fingertips visible above the heap of zombie games we already own. But the real charge that just makes Contagion’s rotten hand stick out of the pile, is the combination of these features.

The guys at Monochrome aren’t yet satisfied with their lovechild though. On the question how they would rate their game in the current state, Brian Comer responded:

“Both Alex Wright (COO) and I called it simultaneously: “7!” We just aren’t where we want to be and look forward to hitting 9-10 by end of year.”

To get where they want to be, Monochrome still has quite some work laid out before them.

“We have at least 4 new maps and 2 game-modes coming out. We are working on additional features that address the current need to feel a sense of progression, an improved UI and server joining. We will also continue to further optimize and improve the existing experience and have few more surprises in the works.”

A long time ago, Tom was pulled in the world of digital warfare & pixelated adventures. Tom became a journalist and the pixels increased in numbers. Today he writes about them from his humble shack in the Netherlands.
Show one comment