Playing a round in Hearthstone, the addictive card collection game from Blizzard takes at most fifteen minutes out of your day. The Altoid of the online gaming world, this is a curiously addictive game for PC’s and tablets that is free to play. It’s not just a quick and dirty ride, however; Hearthstone is also a game that requires limber emotions.

You’ll laugh when you crush an opponent with your Leroy Jenkins plus Shadowstep combo. You’ll cry when a challenger plays a Northshire Cleric their first turn and proceeds to buff it until it’s impossible to kill. You’ll panic when your just-cast Ragnaros gets transformed into a 1/1 Sheep. And you’ll fight to stay awake until 2 a.m. (well, 1 a.m. now), which is when the new quest is relinquished, so that you can earn enough gold to fight in the arena just ONE more time before bed. It’s easy to become invested in successes and failures in Hearthstone.

For a game that offers so much, it is maddening that the emoting system offers so little in the way of self-expression. There are only six phrases to choose from when trying to communicate with other champions on Hearthstone: Greetings, Thanks, Sorry, Oops, Well Played, or Threaten. The list may sound comprehensive enough, and is obviously designed to keep the game fun, accessible and non-toxic, but anyone who has stepped into the ring knows that these common, innocent phrases are misused and uniquely aggravating in their own rite.

For the new player, opponents may not yet have revealed themselves as the gigantic migraines that they actually are. For these noobs, the list can be broken down into its own unique subset of douche bags that have become easy to stereotype. 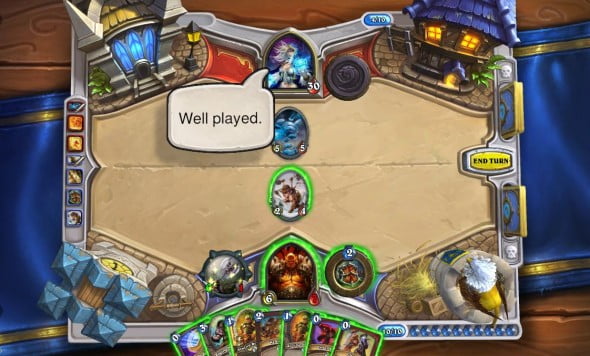 Take Greetings, for example. This emote, when used appropriately, is fine enough. Appropriately means, for the sake of argument, that when a person enters a game or is making his first 1-3 moves, this phrase can be used to literally greet the challenger. “Hey,” it says, “I’m up here and I’m not a bastard.” It’s when people use that salutation mid-game, or, say, right after you’ve made some sort of error in judgment, that the use of “Greetings” does not mean “Hello” any longer. (I’ve heard tell, also, that triple-clicking “Hello” means to hurry the hell up, although I can’t really confirm or deny this. Fun fact:  players have 55 seconds before the “rope timer” begins to burn while playing a turn in Hearthstone.)

And, obviously, Sorry 9 times out of 10 doesn’t mean, “Rough break, dude,” in Hearthstone. A polite usage of this emote might be something like, “Sorry, I was making a sandwich and didn’t press ‘End Turn’. My bad.” Another common usage of “Sorry” could be when you take damage. That’s acceptable, and even polite. It’s when a person uses “Sorry” to celebrate some minor, insubstantial, non-tide-turning victory—especially if this happens more than one turn in a row—that you know that guy’s just a dick. He’s not sorry at all. But he would be, were he only within driving distance of you and your mighty fist.

Oops and “Sorry” are the kissing cousins of Hearthstone. Use “Oops” like a decent human being to say, “Damn it, I dealt two damage to myself instead of you. That’s lame,” or “Damn it, I only used my Windfury once.” However, some players take any opportunity to needle you with overuse of “Oops” and “Sorry”. Throw out a Mad Bomber and it doesn’t kill your opponent’s Taunt? “Oops.” Toss down a card whose
Battlecry is to grant adjacent minions a Taunt or buff, but you have only one other card on the board? “That didn’t quite hit the mark.” Didn’t it, you enormous failed abortion?

When a player uses Thanks, for whatever reason, many do not use it to incite some sort of reaction. Usually this is used as a follow-up to “Well Played.” People who use those two emotes together are the only people, in my opinion, who are doing it right. These people probably earn $50,000 a year and are no stranger to oral sex or camping. They’re watching their cholesterol and have splurge days and always have a pen with them when they leave the house. They have watch Breaking Bad and they don’t make it a point to run yellow lights. They are the majority, the normal, non-mouth-breathing population that enjoy Hearthstone. Tragically, none of them seem to be playing when I’m online.

As any player with more than 10 games under his belt knows, however, it is without a doubt Well Played that makes Hearthstone quite possibly the most passive aggressive game in the history of the world. The right time to tell an opponent that something was well played is generally in these two scenarios: a) that person has just legitimately wrecked you; b) that person knows you’re about to be wrecked, and is thanking you for your time. That’s really it. Using the “Well Played” emote for anything other than those situations is more or less the most aggravating thing that has ever happened to anyone.

If you’re a horrible person and hadn’t nailed down just how to use a commendation as a declaration of incompetence, just do this:  start by clicking “Well Played” at any time. This strategy, even if you don’t really know what you want to make fun of yet, is a never-fail recipe to boil anyone’s blood. Without fail, hearing the same emote over and over will clench fists. However, once that basic technique is mastered, you can switch it up a little. Some like to hit the button after every turn they take; some like to do it after every turn that you take. Some like to do it after you put down a card—every time you put down a card. Other players use the expression when “Oops” or “Sorry” would have been a more civil emote. Rarely do people use any of these phrases correctly.

Except for Threaten. For whatever reason, people need no explanation on how to use that emote, and never seem to use it for anything other than was intended, proving that the undercurrent of hostility is essential to the competitive spirit.

If you’re looking to explore Hearthstone a little further, you can check out this introductory video. Naxxramas, the game’s first expansion, was just released July 22, so there’s never been a better time to get into the game and see what all the fuss is about. According to the site, the first wing of Naxxramas will be free-to-play during the launch event from now until early September.

Mariah lives in Seattle, and is really 3 midgets inside a lady suit.
Show 5 comments