We’ve never seen anything quite like Drakerz-Confrontation, the new augmented reality card game from French developer Peoleo. Based in Tourcoing, France, PEOLEO Entertainment is an independent development studio dedicated to bringing innovative and interactive experiences to players around the world. Peoleo’s upcoming title Drakerz-Confrontation is already a big hit in Europe, and the PC game is coming up on the tail end of its Kickstarter campaign at the end of June here in the U.S.

Out now and free-to-play on Steam or the Drakerz website, the game is a close cousin to your favorite TCG, but with a wild twist. A patented augmented reality engine allows players (or “Drakerz”) to collect premium, physical cards that actually summon creatures. Like a way more legit Pokemon. Or Skylanders for big kids. But way cooler. 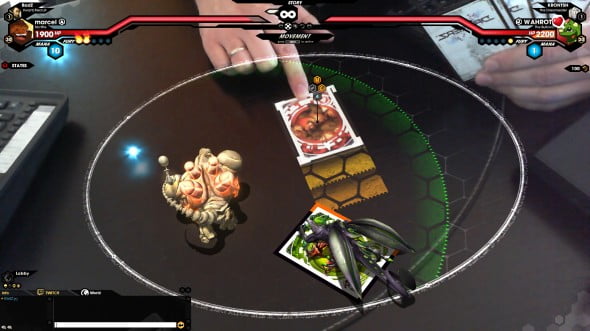 Drakerz show cards to a webcam, and this calls forth legendary creatures (“Drakos”) to interact with other players’ cards. So: you play your card, setting it in front of you a la Magic. On your computer screen, a mythical beastie is conjured, unlocked from another realm, and set to roam free in the virtual world. And fight and stuff. It’s all very technical. But not technically: the game takes care of the tedium associated with some other physical TCG’s by keeping score and managing card cost calculations.

Obviously I’m super excited about the upcoming title, and just had to talk to the Peoleo team. Without further ado, I give you: Drakerz-Confrontation!

Mariah Beckman: Hey there! Thanks for talking to us about your forthcoming title, Drakerz. This augmented reality trading card game is presently available via Steam for free, and the developer team at Peoleo is seeking crowdfunding through Kickstarter to give this title the polish it needs prior to it’s anticipated release date, which is___?.

MB: So, who are you and what do you at Peoleo?

BC: We are a team of 20 game professionals and we work in a digital communication agency of 85 employees: Peoleo. Drakerz is the spearhead of our video game studio.

MB: Can you tell us a little about the projects that you or your team have worked on prior to forming Peoleo? What else might we recognize some of your team’s work from?

BC: Drakerz is our very first big game. However all team members are seasoned, and have worked on titles like Dofus, Wakfu, Ryzom, and many others.

MB: What is Peoleo’s vision or mission––what sets you apart from other developers?

BC: We like when reality meets virtuality. We believe that emerging technologies are evolving this way (3D printing, connected items, virtual reality glasses …). We manage this meeting thanks to augmented reality. We did not invent it, but we improved it to provide a unique experience.

MB: Can you tell us a little bit about Drakerz, the soon-to-be-released, one-of-a-kind trading card game?

BC:
Drakerz-Confrontation is an online game in which players from around the world embody Drakerz. Among these mythical creatures, half-dragon half-chimera, players have epic duels and try to make a name for themselves in Oniris, the world of dreams.

Most other TCGs are either played with « virtual » or « real » (paper) cards. In Drakerz-Confrontation, you‘ll get to enjoy best of both gaming experiences. Playing with your « real » premium cards, you will experience brand new sensations, half way between board and tactical card games. Scoring is entirely managed by the computer, which allows you to focus on the essential: fighting.

As for your virtual cards (no webcam needed), they are accessible via your account no matter what computer you are using to connect.

MB: Where did the inspiration for Drakerz come from?

BC: Many references inspired us: Magic, Yu-Gi-Ho! RPG, fight games, and many others.

MB: Can the game be played without a webcam?

BC: Absolutely! Every card has a virtual version. You can play 100% virtually thanks to virtual packs available on steam: http://store.steampowered.com/app/266030/

MB: I love the artwork, not just on the card’s but in the creature avatars. Who is responsible for your artistic vision?

MB: Do you have plans to continue expanding your decks? How so?

CB: Yes, extension 2 is being prepared, but we don’t know when it will be launched yet.

MB: I have recently caught Hearthstone fever, the digital collectible card game from mega-developer Blizzard. That’s actually how I came to learn about DRAKERZ, as well as Hex, another Kickstarter game that looks promising. How is Drakerz going to help cure me of my addiction to Azeroth?

I’m kidding; our game provides a new experience, combining the best of two universes: TCG and video game. It’s so fun to exchange real cards while enjoying video game’s thrill. Azeroth is out, Oniris is in!

MB: Is it just me, or is Drakerz sort of a cross between Skylanders and other popular TCG’s, such as the monolith Magic?

CB: Exactly, but in Skylander, you don’t actually play with the figurine, you just set it down on its base. As for Magic, it is a little outdated now, but we can say we made a mix of them.

MB: Have you garnered any kind of accolades for this title, or do you have plans to submit Drakerz in competitions?

MB: Drakerz has a little more funding to go before your team has realized its funding goals. What is the next step for Peoleo to complete this title by the anticipated release date? I know your team is currently working on campaign/story mode; what other changes can players expect to see once the game is officially released?

BC: Our Kickstarter is far from being a success yet. It’s just the beginning, that’s why we need more awareness. The game will be improved with a brand new story mode, and stability bugs will be fixed. Official tournaments will also be able to begin.

MB: What other titles, if any, do you presently have in the works?

CB: We have a second project in preparation: Drakerz-Quest: an “augmented” book about the Drakerz universe.

MB: What sort of titles and development can we expect from Peoleo in the coming months and years?

CB: We are working on new extensions for Drakerz-Confrontation.

MB: Are there any developers or studios that your team champions or that you’re aspiring to? In your opinion, who are some of the industry leaders right now that gamers should be watching out for? (Peoleo aside, of course.)

CB: Very difficult question, I like what Hanakaï studio has done with Prodigy.

MB: What’s your favorite game? It can be old or new, one you’ve worked on or one that you feel is iconic?

CB: I’m a big fan of the Fallout series, but many other games made me waste hundreds of hours!

MB: I like to include at least one fun question, just for kicks. One of my favorite plays is Sartre’s “No Exit”, made memorable by the line “L’enfer, c’est les autres” or “Hell is other people”. Who populates your small room in hell, in 300 words or fewer? I’ll go first: A mean dog that growls and won’t let you pet him, but who seems to like everyone else. A culinary student who really favors fruit sculptures, and refers to “his craft” in situations where it’s inappropriate. The Sham-Wow guy from those infomercials. And whoever the opposite of Eddie Izzard is…so I guess Joan Rivers? Now you go.

CB: Ok, first of all, the whole Drakerz team (^^), my third grade’s German teacher, the first Spiderman actor, Ralph from The Simpsons, my “music-fan” neighbor.

MB: Too funny! Again, we thank you for taking the time to sit down with our readers, and we look forward to reporting on future developments from your studio.

I’d also like to give a special thank you to Karen Oliver for coordinating and translating our interview!