After filing for Chapter 11 bankruptcy in June, video game developer and publisher Atari announced its first new product. In an unlikely fellowship, and under its revised business strategy as an interactive entertainment production company, Atari and Denny’s will be offering three new titles. That’s right, Denny’s. As in Americana-décor-and-open-all-night-hashbrowns-and-black-coffee Denny’s.

Now, in an homage to retro gaming, fans of arcade asteroids and eggs overeasy can unite in one glorious, distracting dining experience.

Hashteroids, Take-Out and Centipup are out now, and available for download for a limited time only for Android and iOS mobile. The applications are not stand-alone, but rather part of a Denny’s app called Denny’s Atari Remix. 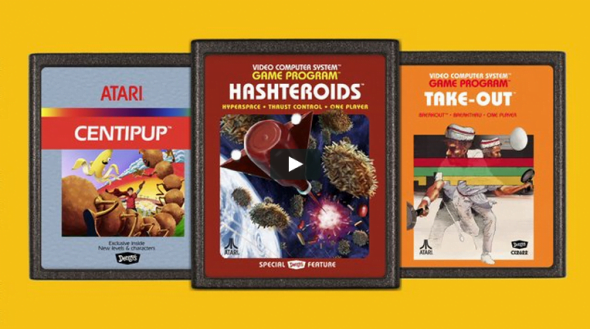 Anyone who isn’t 12 years old knows that these games are literally the meat-and-potatoes of arcade game development. This could actually be the most proactive partnership ever to come to the marketing table. After all, Denny’s demographic being an increasingly hip, up-all-night crowd, blended with some of the Greatest Generation, there is potential here for this incentive to be a huge draw to both companies. Gamers into ironically playing retro games, as well as an older crowd that remembers when these games were the bees knees, could be a huge draw to an already strong franchise, and a breath of fresh air into an established but struggling one.

Atari hopes this partnership will revitalize the brand, exposing these classic games to new audiences and rekindling fond memories for original fans. “Transforming our classic and beloved games into a retro, remixed promotion,” said Fred Chesnais, chief executive officer of Atari, “will be a natural way to expose our brand to a new generation and resonate with our long-time fans in a fun and unique way.”

Denny’s may have been inspired in their game partnership with Atari by condiment magnate, Heinz. The ketchup-kingpin has recently created a Heinz Table Games initiative, which will run through September of this year. Marketed to restaurateurs, the website advertises that guests can scan the QR code on the posterior of the Heinz Ketchup bottle to make the most of quality family time.

This, in a statement from Heinz, explains the theory that may well stand behind Denny’s ingenious partnership with Atari, mimicking Heinz’s outreach to business owners:

Heinz Table Games was designed to help entertain and engage your guests after they place their order until their food arrives. Reducing their perceived wait-time may promote greater customer satisfaction and may help to drive loyalty and traffic to your establishment.”

Hashteroids, according to a press release from Atari, takes players aboard the SS Denny’s Condiment Transport Ship in an “arcade ketchup shooter”. Your objective: Destroy—you guessed it—hashbrowns, using only blasts of ketchup and your wits. This is, of course, based loosely on the smash hit Asteroids, released December 31, 1981, and still playable today on Google Chrome. The movie adaptation promises to be a non-stop thrill-ride.

Centipup is a more light-hearted take on the popular Centipede (which was released December 31, 1982, and which fans can still play thanks to IGN). In this fast-paced survival game, players use a bottle of syrup to neutralize entranced food zombies from the Wonderfood Forest. (Big stretch there.) Players spray syrup onto foes, transforming them into…eggs. Fried eggs. I get it—who doesn’t like fried eggs? Use your egg blasting skills in Centipup to ultimately defeat the evil and formidable Nannerpuss.

Takeout, a nod to Atari’s Breakout, was created in part by Steve Wozniak and Steve Jobs in 1976. Inspired by Pong, this game is an absolute retro gem. In the Denny’s revamp Takeout, players destroy a wall of Denny’s breakfast food items, brick by tasty brick, armed with only an egg and a plate.

Some people are mildly indignant at the game’s release, calling this app a gruesome exploitation of a wonderful piece of gaming history. Others are enjoying the latest from Atari for the light-hearted rehashing (ha!) that it seems to want to  be. Check it out for yourself on Android and iOS for a limited time.