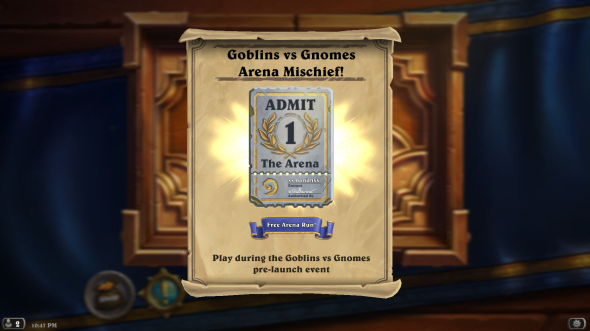 Gazlowe: Oh, now you’ve done it. You broke it.

Toshley: I did no such thing, Gazlowe. I’ve improved it. See? The springs on the Hearthstone box are now remote operated! The wood is self-polishing! The card-shuffling mechanism is now 100% more mechanic-y!

Gazlowe: That’s  . . . great and all, but your mech appears to be distributing Goblins vs Gnomes cards into the Arena! It’s not time yet, Toshley! Turn it off!

Toshley: Ah, of course, that was merely a miscalculation. Just give me a moment to recalibrate the distribution device.

Gazlowe: It’s too late, you upgrade-obsessed gnome, they’ve got their hands on them already! Things are about to get very . . . interesting in the Hearthstone Arena. . . .

For those of you who are counting down the minutes until the December 8th launch of Goblins vs Gnomes for Hearthstone, get ready to tie one on. Beginning Friday, December 5th, all of the new expansion cards are accessible for a little sneak peek in the Arena.

That’s right. All of the cards. I know, right?

As if that weren’t enough, you can also look forward to previewing Spectator Mode starting now as well. This voyeuristic enterprise is a first for Battle.net, and for those of you that like to watch, this is your chance to get a look-see at the new cards without ever having to lift a finger.  There’s more detailed info available from Blizzard’s Fireside Chats—check out It’s Better with Friends for more specifics on this brand-new (and, for me at least, lag-free, in-game alternative to Twitch).

Wait: there’s more! Check your inbox, friends, because Blizzard has sent you a first-class ticket to give the new 120 cards a spin, on the house. Between December 4th and 8th, players can play their next Arena game free.  This is available even for those who are already in the midst of an Arena streak; as long as you log in before December 8th, you’ll have access to those new cards.

According to the announcement, the expansion will be live December 8th. From here, players can add these cards from Hearthstone’s first official expansion by purchasing packs, using arcane dust, or redeeming Arena rewards.

Blizzard is calling to all of you enterprising Tavern Hosts out there, too. In an effort to make much of the release, Hearthstone has called on its creative players to send photos and accounts of any Goblins vs Gnomes festivities that take place across the globe. If you’re planning a Hearthstone event for your friends, be sure to document it as best you can.

Decorations, activities, contests, snacks—let your inner engineer run wild, and help us kick off Goblins vs Gnomes with a bang! Even if you don’t decorate, it’s still a great time to gather and play a few friendly matches with your pals.

Be sure to document the festivities and your zany Goblins vs Gnomes theming with photos (FOR SCIENCE!)—and don’t forget to post filming notices!

Hearthstone will post the details of all submitted public gatherings online at FiresideGatherings.com, and then host said event over the course of the December 13th weekend. Then, by December 22nd, shoot HS an email to recap your event for G v G posterity. The four “best and brightest” events (whatever that means) will be rewarded with a care package of Hearthstone swag.