There has been a lot of negative feedback towards Steam’s Early Access programming, mostly because it releases lower quality games, often for the same price as a standard release. As such, I feel that previews of Steam Early Access games should all be accompanied by the following disclaimer, so as to avoid senseless repetition: This game is buggy, unfinished, glitchy, poorly balanced and slow. It is a concept and an idea, one that is still being worked on, developed and fleshed out – as such, this preview will be more of a look into what the game could be like when it releases proper, and whether the fundamental foundations and systems already in place are well designed and interesting enough to warrant your purchase. Capiche?

Kenshi is an odd beast. Bucking the trends set by most games that take place in dystopian settings, Kenshi  is a hardcore, squad based, free roaming strategy/RPG. It’s main focus is on giving the player a “normal life” – not in the sense that they drink tea and watch Coronation Street all day, that would be boring – in the sense that the player is just one of many people trying to make a living in a harsh, barren world of bandits, thieves and cannibalism. After creating a character in what is a fairly complex creation tool, the player can choose an origin, be it that of an old war veteran, a survivor among wounded friends, or a lone wanderer. 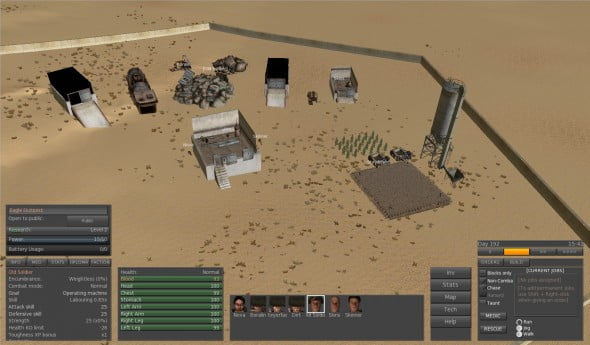 I decided to choose Lone Wanderer, because videogames have taught me that I can make it on my own as long as I’m careful, strong and courageous. In Kenshi, however, I walked around the desert for a bit, and then died. It was here that I was struck with the immense range of possible paths and choices one can make in Kenshi, not in a Good/Evil, kill a child/ save a child sense, but in a way that more closely reflects the real implications of living in such a dystopian world. I decided then to choose the origin of The Freedom Seekers; a fairly established group of survivors with a decent sum of cash and some building materials.

Once I had explored some of the nearby towns, I decided to set up a small shack near a large trading town. From here, my team and I constructed a mine, a stone processor, farming facilities, a store room, walls and a gate, a rum still, and a hemp field (so I could make clothes, this isn’t Far Cry 3). What felt at first like a direction-less,  sand-filled sandbox game had now become something of a city building sim. I was making rum and fabrics to sell to the town nearby, with each of my team members devoting time and effort to specific tasks to further the development of “Eagle Outpost”. All in all, to research, construct and become comfortable in a small mining and farming enclave, it took about 5 real hours, and about a week in game time (double and triple speed options are most welcome in Kenshi). 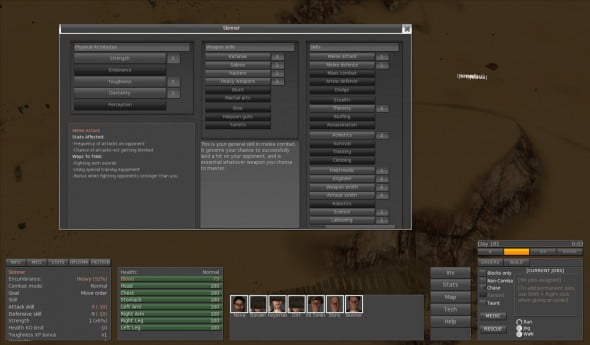 As fun as town building was, a setting like this needs some sort of conflict, whether it’s violent or not. Although bandit raids are few and far between, they are incredibly dangerous encounters early on, and the game actively encourages you to bait your enemies towards nearby towns so that guards will assist you.

As with most other tasks in the game, there are numerical skill levels attached to combat which can be increased by practising on dummies or fighting in real life. The battles themselves are fairly passive, and their outcome is determined by your (and your opponent’s) attack and defence skills, as well as the defensive qualities of your clothing. At one point, I was visited by a roaming group of bandits. When I refused to pay their tithe, they left, only to return a few days later and brutally attack my group, leaving each member bleeding out and in need of medical attention. 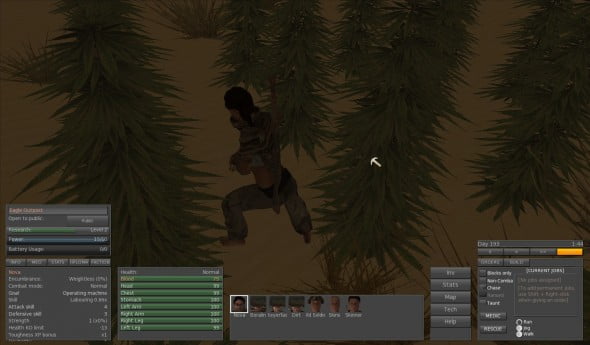 That’s the thing about Kenshi. It’s hardcore. Sometimes even too hardcore. To learn each of the game’s different facets and avenues takes a serious amount of time and dedication, something a casual player just wouldn’t be interested in. The game is also very menu and UI heavy, not to the point where it’s especially cluttered or unintuitive, but the whole thing can look rather daunting on start up.

This is where things can become a little problematic. For all its depth and complexity, it can be easy to get lost in the sheer amount of content on offer in Kenshi, and when that content is often glitchy and broken (my female character recently lost all of her hair for no reason, characters belligerently refuse to walk through doors), it can be a frustrating time. I often found myself questioning whether the skills I was upgrading were really having a noticeable effect on the efficiency of my squad’s labour and research, and how to proceed with certain building or trading strategies (I researched harpoon turrets, but I couldn’t work out how to place them in my town when the option to build them never turned up in build mode). There are also some pretty aggravating issues with dodgy camera rotation and unreliable cursor hovering and clicking. 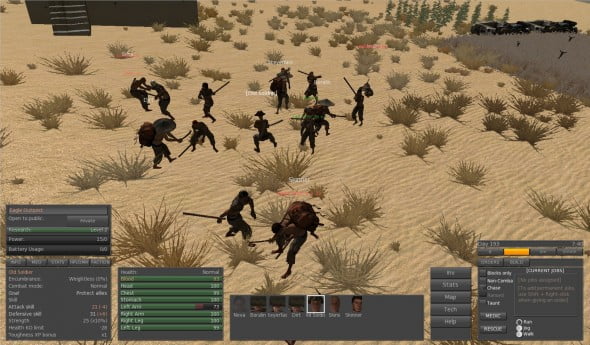 Visual glitches aside, Kenshi isn’t the prettiest of games. It doesn’t really need to be gorgeous considering its focus on strategy and choice, but it’s hard to escape the fact the Kenshi resembles something like brown re-skin of Runescape. As for art direction, the game’s commitment to a Mad Max meets feudal Japan aesthetic is a fresh and interesting take on the genre, and will probably make most players look past ugly textures.

It’s possible, of course, that these issues will be ironed out closer to launch, and when they are, Kenshi should be a gruelling, complex and rewarding SRPG. For all of it’s frustrating quirks, Kenshi presents a level of depth and content evocative of classic RPGs and strategy games of the 90s. It’s hard and it’s unforgiving, but that’s what life should be like in a dystopian, desert land. If you fancy an experience that resembles the original Fallout, only with a tougher exterior and a greater level of freedom, Kenshi is for you.