Welcome to a new GIZORAMA feature called “Kickstarter of the Week”! If you haven’t figured it out from the thoroughly unimaginative name, this feature will focus on the new and interesting Kickstarter projects that are cropping up, but perhaps going unnoticed despite a strong concept and/or a reliable and dedicated team. Although the crowdfunding platform has received a decent amount of flack since its inception, one can’t deny it offers a viable and effective business model for those with the talent to see a project through. It also allows for less commercially viable games to grace the light of day, games that sound incredible, just not to the ears of aging executives. Since AAA publishers are getting more incompetent at gauging the market, and Kickstarter is still around, I thought it would be fun to share some of the more interesting Kickstarter projects currently being developed.

With that in mind, I was made aware of Proven Lands‘ existence this week, and was instantly hooked on  its concept. A procedurally generated, sci-fi sandbox game, Proven Lands promises to put you in the slightly less comfortable shoes of a working class Forklift Driver protagonist, putting less of an emphasis on super powered action heroes, and more emphasis on the struggle to survive. The game is set to be split into five acts, each filled with different alien races, plants and civilizations.

So there’s the basic pitch, but you can read a more in depth list of features over on the Proven Lands Kickstarter. I was interested to see what sets Proven Lands apart from the myriad other procedurally generated, crafting heavy survival games that are cropping up in every corner of Steam; so I decided to try out the game’s free pre-alpha demo. First of all, the game boasts a pulpy 70s sci-fi design, combining classic elements of  Star Wars, Star Trek, and Alien iconography. As somebody who’s getting a little sick of dark and gritty sci-fi, I long for more games that are willing to try something more camp and colourful, and Proven Lands doesn’t disappoint. That’s not to say it shouldn’t be taken seriously though; when darkness falls and the sandstorms begin, things actually get pretty atmospheric, an impressive feat at such an early stage of development.

Since the pre-alpha functions as simply a proof of concept, it demonstrates only the most basic aspects of the game. One can explore a little bit, craft a few tools and consumables, and fight some of the wandering alien lifeforms. Most of the survival aspects haven’t been properly implemented of course, but in its pre-alpha stage, Proven Lands still feels more complete than some games on Early Access, and they cost money. 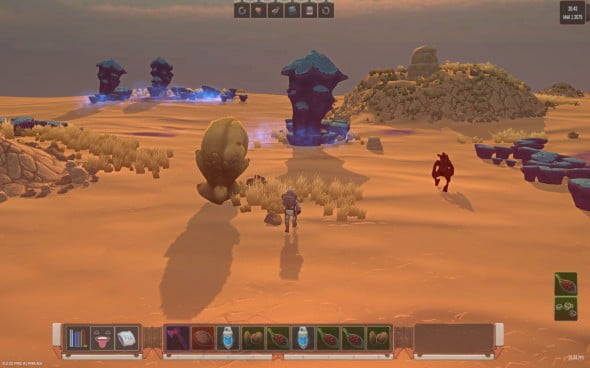 Probably the most interesting thing about Proven Lands is its focus on ecosystems and wildlife. Even at this early stage, one can see families of alien species roaming the dunes of an uncharted planet, and there are gigantic, colourful plants that can be cut down and eaten. I constantly felt like my helmeted avatar was trashing a Spore organism’s picnic, eagerly stirring trouble with hulking blue monsters.

Given that the game can already be played in pre-alpha, and that this team seems passionate and experienced about creating a truly unique sci-fi roguelike, Proven Lands is showing a lot of promise. Times are tough, and I can’t convince you to drop your hard earned cash on something, especially if your short on the stuff. I would, however, urge you to keep an eye on Proven Lands. With concept art this gorgeous, how could you not?