Since the day I first played Burnout 3: Takedown, I have been a huge racing game enthusiast, from Mario Kart to Wipeout to Forza, I have been drifting and burning rubber my way through the racing game genre, and loving every minute of it. So then imagine my excitement when I found out that I had the opportunity to play and review the young yet promising new addition the racing world, glorified for its meticulous and realistic physics; the little Ayrton Senna within me squealed with glee!

Next Car Game, released by Bugbear Entertainment (also the developers of the immensely fun FlatOut series), made its first appearances in the gaming community during its (unfortunately, failed) Kickstarter campaign (due to its lack of funding and inability to reach its goal; but, hell-bent on the release of the game, the developers recently released an early access version of the game on Steam) as well as by making its rounds in the subforum (or “sub-reddit”) /r/gaming on the popular social news and entertainment site Reddit. Reddit users praised the game’s physics intensive engine while also admitting skepticism concerning the sensitivity of the damage system. Getting my hands on the game, as well the “Sneak Peak Technology 2.0″** ( a pre-order exclusive giving early buyers the opportunity for a more in-depth look and sneak peak into the game’s physics engine), gave me the necessary insight in deciding whether Next Car Game will follow in the footsteps of its predecessors and live up to the game that the gaming community has hyped it up to be, or crash and burn, just like its Kickstarter. 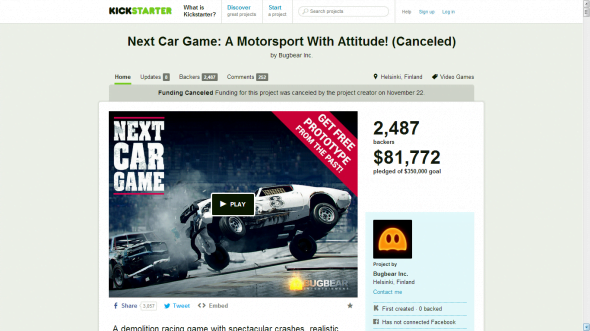 Considering the game was still in its pre-alpha stage, complete with all the bugs and missing features that accompany the phase, I am not able to give the game as thorough a review as I would have otherwise done if it was a full game. Nevertheless, when testing the Next Car Game, I focused most of my attention on the physics, controls, usability, and overall gameplay, forgiving aspects such as graphics and visuals, sound, and missing features (though I will list them in their current state).

The pre-alpha version starts up with a very minimal and unpolished (understandable) garage tab in which the user has the option of choosing between two different classes of cars, a relatively high-powered American vehicle (I say relative because I am simply comparing it to the other available car), and a lower-powered yet lighter and faster accelerating European car. While the cars do look worn-out and beat-up, their interesting designs and imperfect frames contribute to the classic and roughed-up style that I assume the artists were trying to achieve. Also on the garage menu are options that, while not currently available, will include “repair car,” “research” (most likely for car upgrades), “car info,”” test drive,” “sell car,” and “set as favorite.” In addition to the garage tab, other tabs of the game (while, again, not currently available) are comprised of “Market,” “Research,” “Social,”  and “Menu” tabs (“Menu” is the only other tab that is available to choose from which provides the options to pause and exit the game as well as to go to the game’s forum). 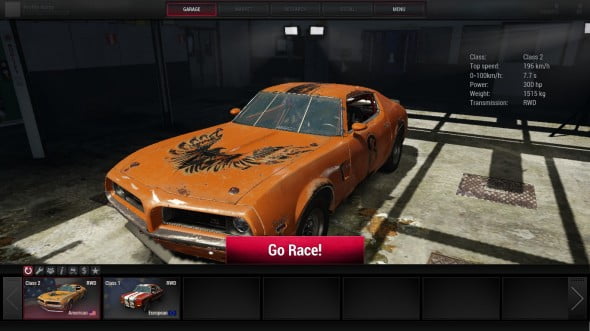 After choosing a car, an event menu pops up, listing the different events available to play. Currently available are the Derby events and the Race events, which includes racing on either tarmac or gravel. The derby stadium allows you to choose a Derby consisting of either 24 or 12 cars while the racing events give the choice of 24, 12, or 2 cars. Moreover, the event menu includes driving assistance options in which you can choose the shifting mode of your car (manual or automatic), and whether to turn on traction control, anti-spin, and the anti-lock braking system (ABS).

By far, one of the best features of the game is the “Last Man Standing” Derby event. If you are unaware of what a derby is, just think bumper cars but, instead of going around in circles with screaming children and small bouts of whiplash at every bump, you’re going around in circles with flying chunks of metal everywhere while everyone else is essentially trying to obliterate you with even more tons of burning metal hurtling at you at hundreds of miles per hour (but if you cower at the thought of a painful firey death, just keep saying to yourself “intense bumper cars!”). The arena is large enough to move around freely without fear of crashing into the walls while also being small enough to easily hit (or if you prefer, evade) your opponents. As the name suggests, the last car standing wins (though “takedowns” are also counted in your score). 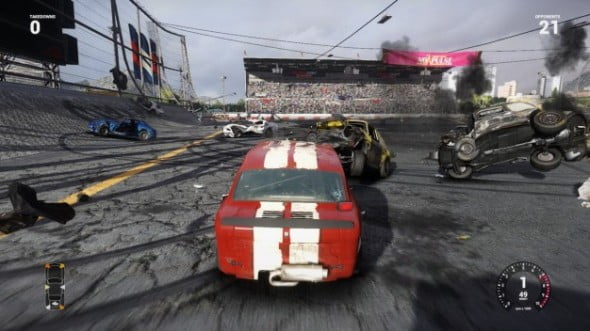 One major aspect of the game that becomes evident within the derby arena is the damage sensitivity system. Due to the developers’ desire to conform to the laws of physics (though not to the point where it becomes unplayable), many of the crashes of the arena will have an effect on the state of your car (whether it be the engine, wheels, or sides) which in turn has an expected effect on the performance of the car. Similar damage systems are found in other racing games but, what makes Next Car Game stand out from the pack, is the great extent to which your car can be damaged yet still be driven as if was, to quote Monty Python’s infamous black knight, ” ’tis but a scratch” (as opposed to in other car games where your car may be taken off the track or renewed after just a few hits). Unfortunately, on some occasions, a crash in the right spot can wreck your car to an undriveable state, or at least to the point where any and all sudden movements will send the car spinning helplessly into a void of despair and destruction, but that is not a usual circumstance. I find that this adds a bit of realism to the game (I don’t expect to sustain a major crash and drive away scot-free) and contributes to the overall experience and fun factor (I find the fact that I can be missing three-fourths of my wheels and still be driving around like a madman in what has ultimately been compacted into a clown car, absolutely delightful!).

Following the derby, I spent a lot of time focusing on the racing events, mostly in order to compare it to my past experiences with the racing events of similar car games. Overall, the tracks are nothing special (though the developers do promise more tracks available in the future). Unlike open-city/open-country racing games, Next Car Game sticks with the more traditional racing tracks that are found at local speedways. Also contrary to other games of the genre, the HUD (head-up display) lacks the typical mini map of the course, typically used to show the course layout as well as the positions of the competing cars. Instead, the HUD consists of a car damage indicator (displaying the health of specific vehicle sections), a lap number display, the player’s current position/rank in a race, and a speedometer. 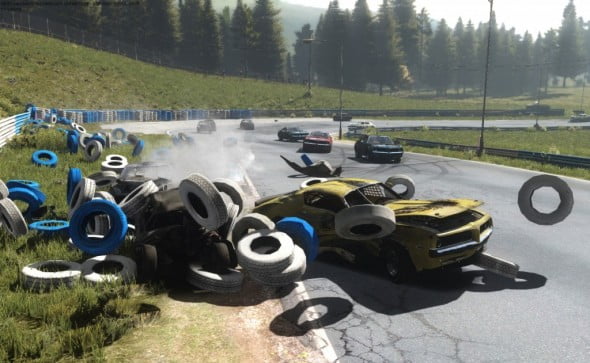 The biggest detriments I encountered during the racing event (and in the game in general) was the difficulty involved in turning, in addition to how easy it is for another car to completely knock you off the track or send you spinning with the slightest nudge. When you first start playing, normal and wide turns are easy to follow through with, no matter which car your driving; however, as soon as you encounter a sharp turn or if you jeer the car to the side with your  finger on the accelerator in an attempt to stabilize your driving, your car is suddenly doing a complete 180 and you’re now facing the wrong end of the track or your being crashed and tumbled into as you vainly try to straighten out your flailing car. Not only the first few times is this frustrating when in the middle of the race, but it is so strenuous to recover from such a mess that you ultimately decide to simply restart the entire race, only to later encounter the same issue once more. While this problem is somewhat diminished by setting the car to manual rather than automatic, it is still a bit annoying to deal with until you slowly learn how to handle the car and avoid such turns. Even so, the entire turning system is not very user-friendly and a turn-off for casual gamers not accustomed to dedicating such practice and effort into racing games.

For being in it’s pre-alpha, I would argue that the overall environment and graphics of the game are decent. While very minimal at best, at least there is something to look at. As I mentioned earlier, the tracks and locations are nothing special and I hope to see more creative and polished arenas and speedways with future updates. I can’t help but laugh as I chaotically crash into the cheering crowd and watch as they continue to cheer and smile, despite having every bone in their body painfully crushed by my metal death machine, I kinda hope they never fix this. 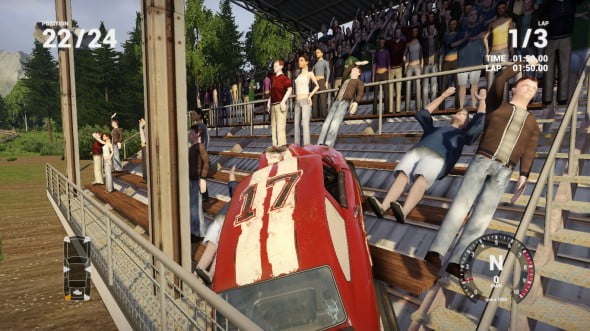 **Note: the pre-order did arrive with the “Sneak Peak Technology 2.0” but, due to either bugs in the download or internal problems with my PC, every time I attempted to run the pre-order exclusive, my system would slow down then crash. However, if  you would like a look into the physics engine the game is being engineered upon, I highly recommend checking out youtube videos and playthroughs of the tech demo.

In all honesty, Next Car Game is not the next Burnout nor it is the new Forza, but I didn’t really expect it, or even want it, to be. Not all racing games can be compared to their predecessors or counterparts because each game introduces a unique and different environment that affects players in different ways. Next Car Game still has a long way to go in terms of user interface, ease of use, and graphic environment, but I do have faith that the developers will soon reach the level where the game will live up to its name. In its current state and price, though I thoroughly enjoyed the majority of the game, I cannot recommend the game to the casual gamer, but if you are a racing game enthusiast or a fan of the developers’ previous game, FlatOut, that doesn’t mind the currently limited features that the pre-alpha brings, I will advise that you consider giving Next Car Game a try and hopefully contribute to the funds and feedback that the creators need in order to build this into the amazing game it has the potential to be.