It’s finally that time! Votes have been cast, prototypes have been developed, tears and sweat have been lost, but learning experiences and copious amounts of whiskey have been absorbed. The lovely folks at Double Fine have once again taken two weeks out of their busy schedules to get even busier; deciding to forget (hence amnesia) everything about their current projects and focus on developing four new rough and ready prototypes from scratch, each with its own team and designated leader. It’s time to dive deep into the resulting prototypes and pick them apart.

As is the case with Amnesia Fortnight, what you’re about to read will not be a review or preview in the conventional sense, rather it will be a simple analysis of everything that has gone into making AF a rewarding and engaging experience, both for its participants and those watching/playing at home. Remember it’s not too late to get involved with Amnesia Fortnight – you can donate and download the following prototypes instantly here, or head over to YouTube and watch 2 Player Productions’ fantastic series documenting the teams and their hard work. 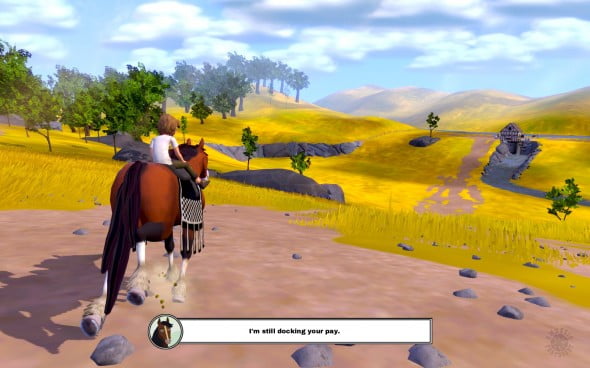 Throughout Amnesia Fortnight’s extensive video coverage, Steed has probably been the game with the least turbulent development cycle. Team Leader John Bernhelm was clear and confident when pitching and discussing his ideas, and this certainly shows in the prototype. Steed is also the most Double Fine-y game of the set, as its a fairly simple action adventure title with an interesting twist to keep things fresh. The game subverts traditional fantasy/adventure games by putting you in the (horse)shoes of one Bellfire, a free horse who travels across a mysterious land assisting adventurers for a fee.

What immediately stands out about Steed is the sheer attention to detail the team have put into Bellfire. Every animation has been well crafted to fit somewhere in between horse realism and Disney’s Tangled, and Bellfire’s design evokes a distinct level of personality without seeming over the top. It’s also surprisingly fun to steer Bellfire, something I was unsure about when I heard the original pitch, especially when so many AAA games have shipped with clunky horse mechanics.

Throughout Bellfire’s adventure, she is attacked by Grex – small goblin-like creatures with an apparent thirst for equestrian violence. Though it’s actually impossible for her to be injured or killed, she can fight these monsters with front and stomp attacks, as well as a back kick and eventually a magic attack. Though combat is a fairly solid experience, it’s fairly limited to button mashing in this early prototype. Oddly enough, the feeling of traversing Steed‘s bright and colourful world (the 3-D environment is surprisingly beautiful for a two week prototype), was the prototype’s main draw for me. It seems that Bernhelm’s simple goal to create a game where controlling a horse felt good was actually enough to satisfy me.

Other than that, there’s little else to say about Steed, and I meant that in a complimentary way. The team set out to make a good horse game in two weeks. They made that horse game, and it’s pretty darn fun. 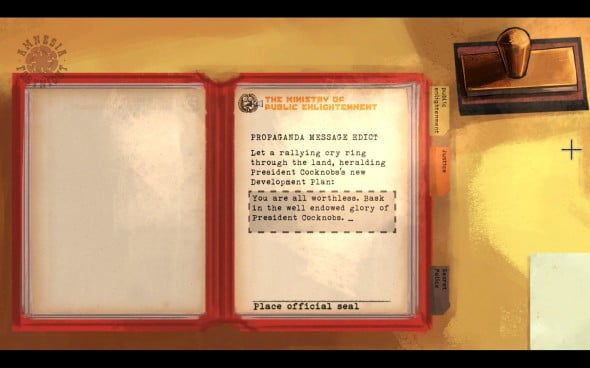 Unlike its counterparts, Dear Leader puts less stock in visual feedback for completing goals, and focuses more on giving the player complex choices as they step into the role of a despotic ruler. While many of these choices aren’t fully fleshed out in this prototype, it does a great job of showcasing Anna Kipnis’ original vision for a Papers Please-esque game sim game about tough decisions that affect people’s lives in a very real way.

The player is given options regarding further national development in areas such as education, industrialization and health, as well as how to deal with enemies to the government, and the specifics of propaganda. I ended up playing as a fairly paranoid and meek leader; afraid to execute without significant investigation, yet wholly convinced I was being betrayed. The game’s defining moment really comes when deciding how to track down a traitor who appears to be one of your closest advisers. After surveying their activities with the secret police, one must make a choice before it is too late and they have assassinated their Dear Leader. Obviously there is only so much time to carry out your duties as a leader, so spying on the wrong ministers could be very costly.

The whole experience is accompanied by some pounding Russian anthems and a Soviet propaganda art style that feels at all times both intense yet slightly comedic, a tone which is mirrored in the game’s accomplished writing.

To my surprise, Dear Leader is actually the prototype I’d most enjoy playing were it developed into a full game. Everything is simply laid out for you, but your actions do carry a surprising amount of weight, even when its expressed through text scrolls, and I’m confident that these choices would become even more engaging were they given a full development cycle and a real budget. Also, I got to call my character President Cocknobs, so that was good. 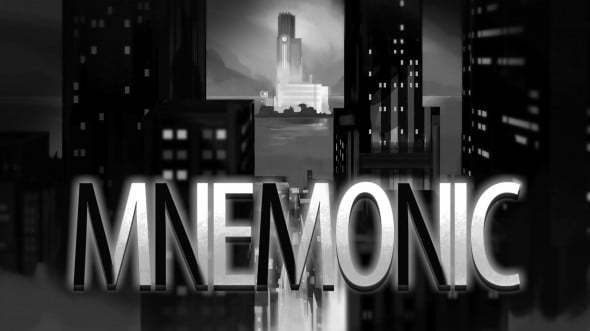 Mnemonic really shocked me when I started playing it. 2 Player Productions had followed Derek Brand and his team as a news helicopter might follow a highway pile-up. Mnemonic seemed fairly heavy conceptually, and Brand seemed to struggle with relaying his ideas and expectations to the team. Without watching said footage though, you’d never have guessed.

Mnemonic is a narrative driven noir adventure game, with a heavy focus on perspective based puzzles and connecting images. The player must rebuild their memories by exploring them and connecting missing pieces together (a fitting theme for Amnesia Fortnight). This involves focusing on objects and areas a la LA Noire, as well as picking up items to solve puzzles. Some of the puzzles are fairly simple, but some are very well thought out and really had my brain doing somersaults. One particular key based puzzle made me re-think the concept of videogame keys for good, so thanks for that Mr Brand.

As is to be expected from a game with an artist for a Team Leader, Mnemonic owes a lot of its atmosphere and inherent mystery to its black and white art style, as well as so wonderful lighting effects. That being said, some pretty nifty writing goes a long way too. For a team who’s main disciplines seemed to be art and mechanics, this story based puzzler was something pretty special. 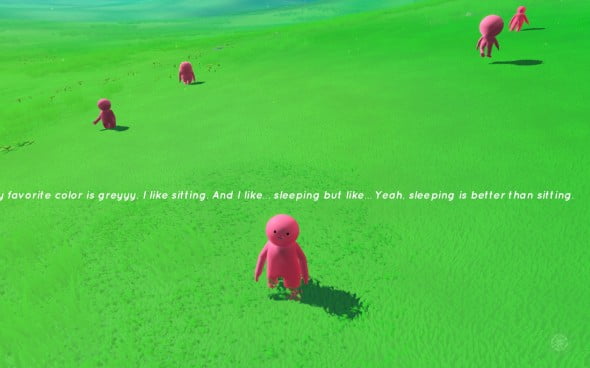 Ah, Little Pink Best Buds. LPBB is something that you really have to play to experience how utterly insane it is. Team Leader and Adventure Time/Bravest Warriors creator Pendleton Ward has a knack for taking something cute and loveable and giving it a dark, twisted core, but LPBB is something else. Essentially, the game is the Tellytubbies meets chatbots. The Little Pink Best Buds approach you in a sprawling green field, and you must type messages to them and eventually pick a “best bud” to take you to the house on the hill.

Of course, two weeks is not nearly enough time to programme a chatbot to accommodate every message a player might type to his bud, but the basics have been covered well enough. Each best bud is uniquely hilarious, albeit often-times equally scary and/or sadistic. Each comes with its own individual quirk or prop. There’s a hairy guy, a guy with a colourful bike (or Lor as he likes to be called), a guy with a dog, a dead guy etc. and each one is voiced by a member of the team. To say that these guys aren’t trained voice actors, they’ve done an outstanding job lending their vocal talents to these memorable characters, particularly programmer Brandon Dillon’s creepy moustache bud, and Razmig Mavlian’s rather touching portrayal of Big Leg.

I can’t in good conscience spoil LPBB‘s twisted and surprising ending, but I can tell you it is like nothing you’ve ever witnessed in a videogame. Truthfully, the entire prototype is like nothing I have ever seen or played before. I didn’t think a game could be hilarious and deeply disturbing all at once, but Little Pink Best Buds accomplishes both with ease. Bravo.

To add a surprising twist ending to this piece, I’m naming Amnesia Fortnight the best game of Amnesia Fortnight 2014. AF opens up the otherwise secretive world of game development to an audience, warts and all. It shows us that game’s are created by people, not machines, and these people put a significant amount of passion and effort into creating the game’s we love to play. It also shows us that game devs are not “out of ideas” or recycling the same tired ideas, and nothing proves it better than a horse fighting game, a world leader sim, a noir puzzler about memories, and chatbot Tellytubbies.

I had so much fun simply keeping up with AF this year, and it proved a valuable and entertaining learning experience for me, one that I would recommend to anyone with even the slightest interest in games or game development. Derek, Anna, John, Pen, and everyone else at Double Fine should give themselves several pats on the back, you all did great.

Liam is a writer from the UK. He is currently pursuing his childhood dream of become a professional wrestler, by constantly wrestling with his deteriorating mental health.