Each and every generation, the gaming industry innovates in some way. However, this go around, innovation is somewhat scarce as last-gen consoles have already done it all. Does that mean next-gen consoles aren’t worth the buy? Absolutely not, but at the moment, there’s really not much to do with the PlayStation 4.The PS4 doesn’t exactly do anything groundbreaking , but it’s a huge improvement over PS3 in both hardware and software.

While unboxing the PS4, the first thing I noticed is how incredibly small the console is. That’s not to say the machine isn’t packing some weight, but it is significantly smaller than the Xbox One.

On the exterior, the PS4 has angular edges, making the console one big parallelogram. The shape of the machine is very reminiscent of the slim design of the PS2. This adds to the futuristic look of the console and is sure to be the coolest looking piece of machinery on your shelf. Like I said, the PS4 is heavy, possibly because of the fact that the power brick is stored internally. This does pose possible overheating issues, but the console has a large array of vents on the back to prevent these issues.

When you turn the console on, a long strip of light beams from the top, in between the mat-black and glossy sheen. The light represents the several states of its operation: Blue for when the console boots up, white for when you’re in-game, and orange for when it’s in Standby Mode. Standby Mode is basically a power saving mode in which your PS4 is in a state of hibernation. While in Standby Mode, the console can charge the DualShock 4 via Micro-USB. On the front there is a slot loading Blu-Ray drive and two USB ports. The disc drive plays PS4 games (obviously), Blu-Ray discs, and standard DVDs. Strangely, Audio CDs are not supported, but as albums are increasingly being bought digitally rather than physically, it likely won’t bother many. At launch, external memory hard drives are not supported, so the two USB ports are rarely used except for charging the controller. There’s also two touch-sensitive buttons to the right of the disc drive, Power and Eject.

The DualShock 4 is easily the best controller Sony has ever produced, taking queues from the Xbox 360’s highly praised gamepad. It comes with several new features such as a light bar to interact with the PlayStation Camera and the TouchPad that Sony hasn’t shut up about. Without the PS Camera, the light bar is solely used for the function of letting you know which player you are in a split-screen game by having different colors per controller. At this point, the touchpad is just a gimmick. It’s used for small things in several of PS4’s games, but only has a true purpose in Killzone: Shadow Fall. With a swype up, down, left, or right, you can direct your robotic companion, OWL, to carry out several commands, such as shooting a zipline or providing a temporary stationary shield. In other games, it does small things like opening the World Map is AC IV.

Everything else on the DualShock 4 has been updated based on the critical response of the DualShock 3. For starters, the thumbsticks are now smaller and concave rather than the DS3’s convex design. They provide much more accuracy, but after pressing the left stick forward over and over again to sprint in fast-paced shooters like Call of Duty: Ghosts or Blacklight: Retribution, my thumb begins to ache. The action buttons have also been changed slightly. You may not have noticed this from the DualShock 3, but the Square and Circle buttons have a larger distance between them than the X and Triangle buttons do. Now, much like an Xbox controller, the buttons have the same distance between each other both ways. The Directional Pad is also improved slightly. The buttons have more click, they are longer and have more grip to them. As a long time Xbox gamer, I had a little trouble adjusting to moving my left thumb up rather than down to press them. On the back of the controller, there is a Micro-USB port used for charging the controller and connecting it to other devices with support.

While Mini-USB is being phased out, I would have preferred if the DS4 featured the same port used on the DS3. These ports are smaller and more likely to break. The grip of the DualShock 4 is also a huge change. It is almost exactly the same shape as a 360’s grip for more comfortable use. The bumpers: L1 and R1 have been slightly improved to conform to the placement of your index fingers but are not a drastic departure from those found on the DualShock 3. And, at long last, the triggers are fixed. In my opinion, the most notable difference between old and new DualShocks is the triggers. They now conform to your fingers and actually feel like a button that could be used for shooters. In fact, they are so good that all shooters will now use L2 and R2 for standard ironsights and shooting. Gone is the awkward use of the bumpers for these operations. This is Next-Gen! If I could give one criticism about the triggers, it would be how the spring seems to get a bit hard the more you push down. This is purely opinion, and is just a pet peeve.

The DualShock 4 has a built in lithium-ion rechargeable battery. It can be charged via Micro-USB but it’s charge only lasts 6-8 hours, a fraction of the DualShock 3’s 30-hour charge. Much of the battery loss is due to the pointless light bar. I don’t have the PlayStation Camera, so it’s just a useless blue light to me. Above the PS Button, there is a mono speaker that unpleasantly reminded me of the WIImote speaker and how dreadful the quality was. Thankfully, the audio isn’t that bad, but I personally don’t like sound coming from my controller so I turned it all the way down. On the bottom the DualShock 4, there is a headphone jack for the earbud bundled with every system. Unlike the Xbox One’s jack, any and all standard headsets will work on the controller. While you might expect this to be solely for chat, there is an option that allows for you to transfer all audio from your TV to your headphones. If someone is listening to music or a child is sleeping, this feature will come in handy.

Replacing the Start and Select buttons on all previous DualShocks are Options and Share. Options does the exact same thing as Start but Share is a new entity. With the press of this button, you can take screenshots, save the last 15 minutes of your gameplay, or begin streaming on either Twitch or UStream. Screenshots are fairly self-explanatory, but the recording has confused many. While playing a game, the PS4 is always recording, but it’s up to you whether or not you want to save and share this gameplay. It records at 720p, and looks pretty good to me. While streaming to Twitch is cool, I would’ve liked the option to upload directly to YouTube which might become a feature later on. 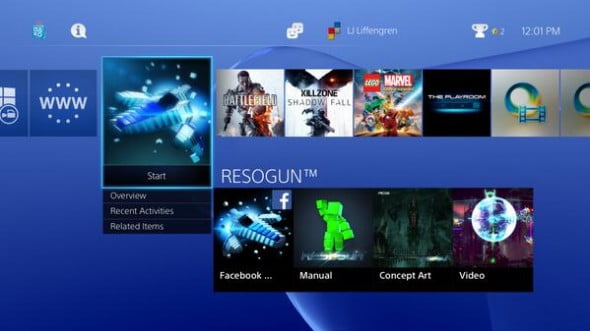 When I scrolled along the XMB interface on the PS3 for the first time, I thought that it felt slow. Really slow. Well, that has all changed on the PlayStation 4 with the Dynamic Menu Screen. The home screen you’re greeted to when you power on the console is a quick one. This is one of the fastest interfaces I’ve ever used and it suits both gamers and just people that want to watch some Netflix. In the menu, you’ll find a bar of all your downloaded or installed games and apps, from Battlefield 4, to TV and Video, to the What’s New tab. While it’s simple at first, it became a bit disorganized as I downloaded or installed more games. The bar shows your content, most recently used, from left to right. If you hover over a game and move down, you can see most recent updates, your friends activity involving this game, and more. While on the bar, you can move up at any time to see another bar containing other options such as the Settings Menu, PlayStation Store, Profile, Friends, and Notifications. Also, while in-game, by pressing the PS button, you can jump back to the menu screen in a flash. With the press of the button again, you’re back in the game. This proved to be fairly useful to me when I’m in a lobby waiting for another match. I can pop to the menu screen and view notifications or the time with ease.

Even with all this goodness, the PS4 has a few drawbacks. While it doesn’t feel rushed, there are several features not available at launch. External storage via USB is, at the moment, not supported. Also, a few promised apps such as YouTube are missing from the store at launch. In addition to these complaints, I’ve had a few in-game issues as well. At times, I’ve experienced quick frame-rate drops and lag. Curiously, I’ve only had these issues in games I’ve downloaded digitally from the store such as Resogun and Blacklight: Retribution. These are always brief occurrences but are annoying nonetheless. There were also a few missteps. It would make a lot more sense to use the handy new touchpad as the cursor control on the web browser instead of an analog stick, right? Nope, guess not.

Issues aside, Sony’s new platform excels as a game console and not much else. Sure there’s a few apps and an internet browser, but at it’s core the PlayStation 4 is a game console first. Sony knows what gamers want, and they’ve provided it in style. Would I recommend the PlayStation 4? Of course, but since blockbuster games like Watch Dogs and Destiny have yet to be released, it might be wise to hold off at the moment. Still, with a sexy console, an amazing controller, a quick and easy interface, and the promise of improvement in the future, Sony has developed a machine ready for the future.

LJ's a nerdy teen who lives in the woods and watches squirrels to pass the time. He enjoys video games, Oreoes, and being completely anti-social to all beings of Earth.
Leave a Reply