I don’t own a pool table, and I can’t really say I’m all that good at playing pool. At that, I can’t even say I’m all that good at playing pool for a girl. But two drinks in, before I’m lit enough to dance but not before everything is suddenly funnier by two degrees, I really enjoy pool. When I make my millions, it wouldn’t kill me to have a pool table in my den. Pool is a quiet game of strategy and dignity, and has been affording women the excuse to bend over and arch their backs in public since we quit wearing bustles.

Having established that I play billiard and miniature golf in equal measure, I was pumped to give Pure Pool a shot. I think it’s an underserved genre; we have virtual pinball and virtual slots, but the market isn’t exactly inundated with games a person can only play thanks in part to quarters and whiskey neat. There are a few out there, however, that I’ve played before. 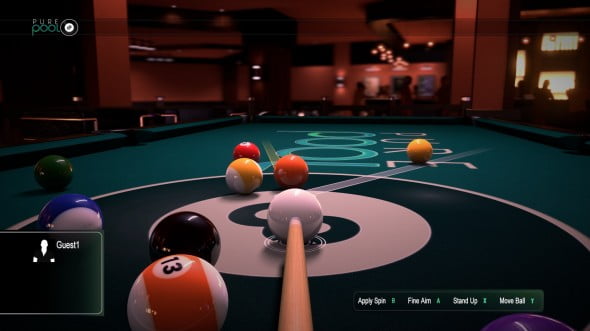 Virtual Pool 4, which players may have invested in other platforms, boasts an ideal and customizable atmosphere for virtual pool. There are multiple settings and locations, and none of them feel like Dick Cheese is singing barely audible jazz off a small stage near the bar. The above-par graphics on Pure Pool, however, are more comparable to the also popular Pool Nation; both of these games feature realistic pool physics and top-down graphics. PN shares the very sleek visuals that players will appreciate in VooFoo’s Pure Pool, which players might expect from a pool simulator in 2014. For those who haven’t played it, Pool Nation also has features that Pure Pool is lacking, such as the extensive rewind and save features that PN offers in spades.

Hustle Kings, also by VooFoo, is the predecessor to Pure Pool, and it shows. The dynamic setting of Hustle Kings—a whitewashed and sort of sterile, yuppie bachelor pad—has been replaced by a classy local tavern in Pure Pool. Mechanics in each game are equally reliable and lifelike. The player’s avatar interacts similarly in both titles as well, standing up for views of the table and taking aim with a cue ball and target balls that are complimented by white and yellow trajectories, respectively.  Both games are also graphically unparalleled.

To say that this game is well rendered would be an understatement. Pure Pool offers the best visuals among virtual billiard games out today. The balls, unlike Pool Nation’s glossy, shiny balls, are realistic and distinguished. For the modest price of this game, I would invest in Pure Pool if only for the integrity of the gameplay mechanics and the high caliber of the artwork. The cushion on the table has appropriate give, and the felt color and artwork is customizable (in color or design, that is.) My pool table is decked out to look like a starscape.

There’s a tutorial to kick things off, but it isn’t so much a tutorial as a dry run. There is clearly an assumption that any player coming to Pure Pool has seen, played, or in some way understands this tabletop game of skill. You learn to aim with the left stick, and to take your shot with the right. You can apply spin to your shot using the B button, and use precision aiming by holding down A. Hold X and use the left stick to stand, offering a realistic look at the table from above; move the ball around on the table using the Y button. 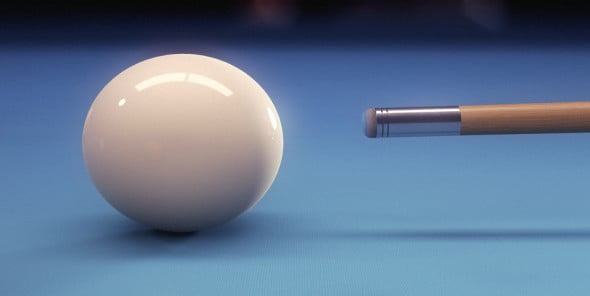 My first instinct was to move the joystick the wrong way, based on the game’s default settings.  It was as if the table was inverted. You can change that under settings though, using My Profile>Options>Invert Aim ‘X’ or ‘Y’ Axis. Once I changed this, it made the whole thing much easier to sync up to. The original inversion seemed counter-intuitive.

When it comes to taking shots, players can apply more (or less) force to their shot, but it’s difficult straight out of the gate to determine how much force a player is using. There’s no gauge or indicator. This means that if you’re not paying attention you can skip the cue ball off the table. I liked that, but some sort of barometer to guide the pressure behind shots might be a nice addition.

The sounds on Pure Pool are great and realistic. The dull roar of conversation was much more civil than I typically experience when I go out to play. Those innocuous sounds of chatter and clinking glassware, however, were preferable to me than the jazzy Muzak that plays by default. The music sounds more like something you’d hear in the lobby of a five-star hotel than a bar, if you ask me, but I don’t know that that’s necessarily a bad thing. It got a little tiresome after a few hours of play, but I definitely prefer that to a lot of the sounds you’d find at a bar in the urban wilds. In the background and periphery of this pool table, there were patrons who were interacting in ways that I didn’t think were very believable for pub-goers. Specifically, no one sauntered over, flopped down quarters, and burped, “I got next.” I really hope developers tackle that huge hole in this release.

My biggest complaints about Pure Pool are exactly the same as my gripes with other high-end releases of the past year. The graphics and visuals are all well above-board. However, the user interface, the menus, and even challenges, like Career Mode, were more lackluster than one would expect from a game with such high production value. That isn’t to say that the game is bad—not by a long shot. I would just love to see a little something extra, maybe in the form of an update, that takes into account small things. 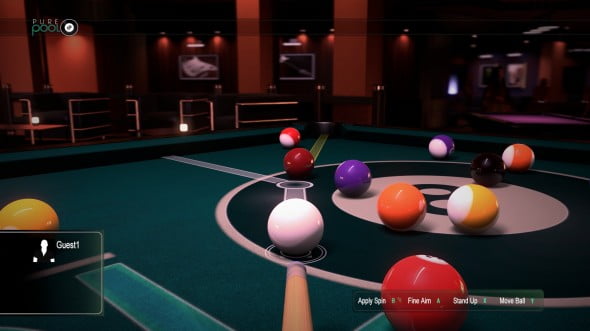 I was excited to see the player DNA option, which seemed to take a page out of Forza’s book with the Drivatar AI. Pure Pool’s DNA allows players to match up against the avatars of other players. However, much like the Drivatar, the appeal was not all that significant for me in the long run. Cool, but the game subsists without it.

Challenges are varied enough to keep a person coming back, always trying to beat either personal best scores or the achievements of players with like-abilities. Objectives for Pure Pool included: Speed Pot (where you pot a defined amount of balls in the fastest possible time); Checkpoint (pot as many balls as possible before time runs out); Perfect Potter (Pot as many consecutive balls as possible without missing); Royal Rumble (clear the table as quickly as possible, and new balls will be added at regular intervals). I think I spent the most time playing in these modes; I found them engaging and they managed to hold my attention without effort.