Let me tell you all about the condition that my condition is in.

It’s stupid how unconditionally I enjoyed Stick it to the Man for Xbox One. Seriously stupid. (Okay, I’m done with the song references now, I promise.) This title has been out for PC and PlayStation since 2013, but it was released for Xbox One and Playstation 4 on August 28. And it’s about time.

Stick it to the Man is a platform adventure game with some psychedelic, tripped out qualities. You play as Ray Doewood, who lives with his old lady, Arlene. Ray’s being hunted down by The Man, who’s after him because he bore witness to a government secret and must be silenced at all costs. Eventually, with your help, Ray’ll get to stick to said Man.

Ray’s a relatable laborer, and he’s made a career out of dropping a myriad of things onto his head in order to test and rate the efficacy of various hard hats. The game begins with a military plane that crashes all too near Ray on his commute home after work. This crash leaves him with a peculiar pink appendage to show for it. He calls it a “crazy looking, pink, spaghetti-arm”.

And that thing is sick! In Ray’s world, only he can see this spaghetti-arm-thing. With it, Ray adopts some sort of telekinesis that allows him to observe dead people, see through walls, read minds, and influence others.

Your proving ground is that coma he falls into after his accident, and the environment has its own map to help familiarize players with Ray’s world.  Ray’s world is a 2D, paper landscape, and is as delightfully malleable as you’d expect paper to be. When you die, Mr. Copy reprints Ray and punches him out to reintroduce him into the game. You learn to grab pins and interact with the environment at this stage, marveling all the while at the paper tropes and corrugated edges and Mario Paper meets Flapjack meets Rocko’s Modern Life feel to this whole adventure. And you learn a little more about Ray’s character and what’s causing this transformation with each mission and new challenge.

There was a sense of whimsy to this game that really drew me in. Ray can move stuff around as it they were stickers or wall clings, peel back the facades of buildings, and grab things and thoughts from people. And it’s a hoot. Use mind-reading mode to “grab people’s brains” and learn how to best help them by transposing their wants and attributes onto others, or by connecting characters who can help each other mutually.

By transposing thought bubbles or motivations from one character to another, you work your way through 10 chapters worth of puzzles. Just like the iOS game Third Eye Crime and the delightfully absurd Steam offering The Bridge, you’re looking for an exit in nearly each of the 10 levels on offer. But the challenges vary enough that you’ll need the provided map, because you need all of the people you meet. This map keeps you on track with incomplete missions, as well as helps Ray navigate his environment. The story reveals itself to you in stages; you peel one person’s theme away from them to help another character, which completes one objective and Rube Goldberg’s your challenges together slowly but surely.

Stealth figures into Stick it to the Man, too. It slows things down a little, but it’s really the only dynamic that makes any sense in a game like this. The goons all look alike:  the government henchmen look just like the nurses in the asylum, for example, except for some comically applied lipstick and a different outfit.

There’s so many nods to the game’s own boundaries, to its artwork, and to the platform’s limitations, that it’s not hard to find it endearing. Ray’s house, for example, is “all the way to the left.” Pop culture and video game references are always a delightful addition to games…we love it, after all, when we recognize our interests overlapping. Developers get this, and it’s a thing of beauty. Again, though, mostly it’s just a cyclical, long, running joke. 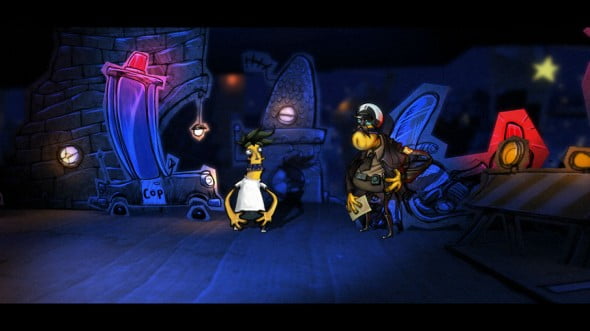 The value of this game really, genuinely, lies in the genius writing and the hilarity of the interactions. The characters Ray encounters keep you grinning all along the way, and it’s nice to play a narrative that’s light and relies less on drama and plot and more on character-driven narrative. You like Ray—he’s a sweet kid, and his chief concern in life seems to be making other people happy. You wish you could hang out with this screwball. You’re sad to see it all end.

My only gripe? Unfortunately this game was pretty brief. That’s maybe five hours of game-play, with two hours tops beating those extra achievements. If you’ve read any of my reviews at all, you know that replay value is tantamount to me. Even if I never crack it open after I beat it once, I like the idea that I can still get my money’s worth after one run-through. (Nutjitsu is one of those mindless ports that I didn’t really expect to like, for example, and I’ve played that for like a million hours now. Tomb Raider, too; I love it, and have played it through twice now.) Just like you can only laugh one time at the same joke, you can’t find this all that funny a second time around.