Strike Suit Zero: Director’s Cut isn’t just another Kickstarter success story, nor is it merely one of the most sophisticated efforts at a free space combat game since SOL: Exodus. No, Strike Suit represents the very first in a new age of indie games available for Microsoft, and it is the flagship release of 25 indie games slated to come out soon from ID@Xbox.

The game was originally released in 2013 for PC, Mac and Linux. London-based indie developer Born Ready Games funded their venture in just a month through their Kickstarter campaign. When the PC platformer made its debut, it was met with praise from both fans and critics because it seemed to fill a niche that had been little explored in past decade: free space, sci-fi combat.

Born Ready hit the ground running with Strike Suit, and they haven’t been resting on their laurels since. Already the developer has dug in their heels working to create an Oculus Rift-compatible version of the game. While the world waits for this next wave in virtual reality gaming, Born Ready has taken a year’s worth of comments and suggestions into consideration to prepare the game for its console release, out now. 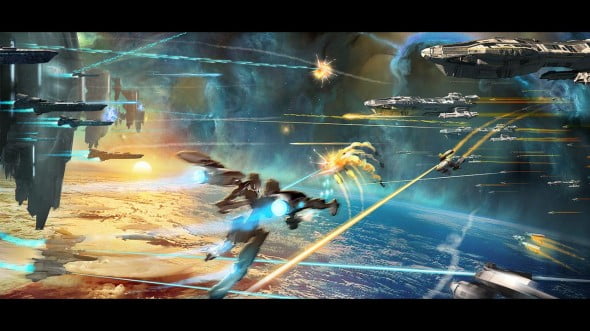 Available for Xbox One and PlayStation 4, the title’s campaign has been restructured to ease new players into the intergalactic fray. The game now has improved graphics and ship models. The team has also added an additional Heroes of the Fleet campaign that contains five additional missions, and two new Marauder and Raptor Strike Suits.

So what’s Strike Suit’s shtick? Well, the year is 2299. Humanity has taken on space exploration, colonizing multiple planets. But when governments on Earth lose control of these outlying colonies, you–a member of the United Nations of Earth–are one of the elite few responsible for regaining control.

Enter the Strike Suit – a revolutionary fighter craft with the ability to transform into a lethal suit of space armor. Using this exotic new mech-weapon, you immerse yourself in massive fleet battles where your dog-fighting skills will directly affect the fate of the cosmos.

The environment is rich, complex and alive below, above and around you as tutorials introduce you to the story in the Director’s Cut.  You’re Adams, and your tutorial and back story are facilitated by a fixed image audio chat between you and officer Reynolds.  Reynolds is the Caucasian equivalent to Michelle Rodriguez, and she delineates tasks to walk you through flight, attacks, and fill you in on your origin story through a disinterested, tough-chick still frame video-chat.

Apparently, you’ve had some sort of a a psychotic break or social deviation, and are being cleared to return to duty. Your back story is just one of the plot points that gets fleshed out in a satisfying but muted, contrived sort of way. You begin with command of a space ship, and you use bullet and plasma firing systems to subdue enemy frigates, cruisers and stealth drones. The ships you pilot move with impressive dexterity, and so do enemy crafts. Each ship comes equipped with weapons, be they bullet, plasma, missile or rocket; each of these has different strengths and limitations, and some offer a more exact reticule than others. Regardless of your ammunition, targeting a moving enemy can be a undertaking. Also, a challenge is the difficulty that lies in trying to outmaneuver enemy fire if, say, you miss a few targets in a row and they begin to gang up on you. You’re piloting a large in a limitless expanse of space, so finding a spot where you are unexposed is more or less impossible, and you can only hope to outrun enemy crafts when they begin to surround you.

Hitting enemies generates flux. In the game, once you have accrued enough of said flux, and you’ve made it far enough in your training to be introduced to the AI Control that gifts you the convertible craft, you man a ship that transforms into a mech. I was expecting something like the mechs in Titanfall or Hawken; instead, your initial “suit” is what an autobot might look like if it were a dragonfly. It’s lean, stealth, sleek and has little meat on its bones. I’m not gonna flat out of say that I was disappointed because it’s not as if I’m the authority on how robot weaponry should look. I will, however, say that there were multiple suits on offer, and none of them were a fail. 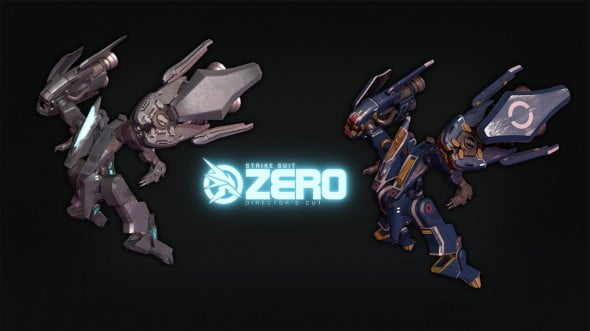 I decided that Strike Suit’s combat system is all the more fun to learn because it’s a little less disorienting to shoot at and follow a target than in most space combat simulators I’ve played. Left joystick controlled pitch and yaw, and the right joystick controlled steering. There is a learning curve, and Strike Suit doesn’t cut you much slack. In training mode, where you’re flying to be okayed to return to active duty, there’s a docility to attacks. This disappears, much like it would in real life, once your training is cut short by enemy interceptors.

There was a cast of characters, for whatever reason, the AI in-ship bot being my favorite, that were all useful to development. I found the dialogue in Strike Suit as engaging as in-combat communications from, say, a low-budget Heart of the Swarm (although completely stationary and inanimate). I appreciate well-written scripts. I give mad props, as the kids say, to a game that uses “whilst” in the tutorial language. I got a kick out of that.

Something I found to be really cool was the first-person view in combat, which really lent the environment some depth and scale. I didn’t wind up using it much, however, because I was pretty inept at aiming in this mode. I killed approximately no one with first person shooter cam.

An area where the game really excelled, and I know I always say this, is in audio. The background music in this game was composed by Homeworld’s Paul Ruskay, and I noted at one point that it was the progeny of Bladerunner‘s more sultry stylings and band playing Star Wars’ “creature cantina”. Enya-esque female vocals were whispering or crooning in what I think was an invented language. The music was really unique and set the tone for Strike Suit. Missiles made a darling R2D2 sound, beeping and booping.

Punishing checkpoints were used fairly but sparingly; you reset right where you’d hope not to, which is at the very beginning of a challenge that you may have failed by the skin of your teeth. Add to this, some of the escort missions and dogfights were on the repetitive side, and I found my interest waning. Leveling up, achievements and overall visual appeal aside, this game gave me the overwhelming urge to play Eve Online probably because of the similarity of the ports between the two games. I wanted to like Strike Suit more than I found myself actually enjoying it.