If you haven’t already experienced the Trials franchise, welcome to an unlimited spectrum of platform-racing courses and challenges. Trials Fusion doesn’t exactly reinvent the wheel; there is certainly no shortage of racing games on the market today. There are few, however, as addicting as this motorcycle puzzle racer that’s as fun to lose as it is to win.

For those unfamiliar with the series, in Trials your motorbike responds sensitively to the physics of the course environment, calling for focus and intuitive guidance to avoid crashes (faults). A bevy of checkpoints ensures that whether you’re a natural or can’t seem to broach a particular obstacle, you’re always advancing. The game offers not just ramps and obstacles, but also hidden challenges and upgrades to make sure that you can’t ever really be through playing. 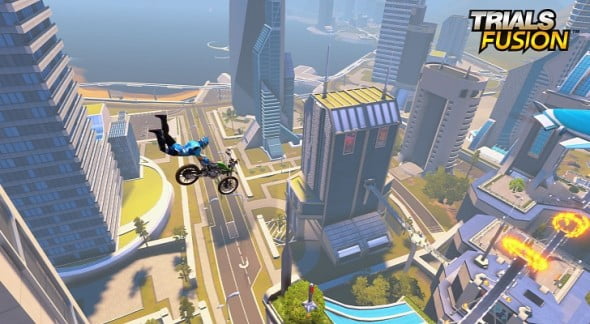 In Trials Fusion, the landscapes are a richly imagined blend of natural cliffs and crags with man made ramps and turbines. Your bike’s headlamp shines accurately as you bounce and roll. The environment bears a detail and depth that is staggering compared to the game’s earliest predecessor. The cities in Trials have infrastructure: boat docks with vessels leaving shore, pedestrian traffic, and automobiles and planes that can occasionally nick you on jumps. There are blimps and bullet trains. Well-manicured landscapes. A real soundtrack, with actual songs that I Shazam’ed. The attention to detail in Fusion is impressive.

Flip and cartwheel high above a floating city alight with suspended runways and lighted landing strips, using blimps and precariously thin strips of piping to fly through a roller coaster of technology and jumps. Planes (or hovercrafts?) whizz by at what seems like arms length of the track, which leads you from an indoor arena with elaborate landscaping and indoor pools to rocky ledges, desert landscapes, snowy hills, beaches and the lower atmosphere. 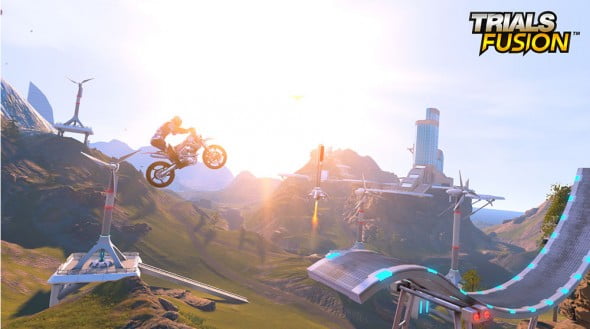 Cindy, your AI guide to mastering Trials, walks your through the futuristic training ground. Balance and timing are key factors to success in Fusion; leaning forward and back, manipulating the environment to your rider’s advantage, using inclines and slopes to clear distance and avoid colliding with objects sounds monotonous, but that hasn’t kept me from playing on past the career races.

Moving through the courses in a levels-based ranking system earns your rider XP. You earn money on your rides, and in your garage you can upgrade and paint your bike (or buy more vehicles), and even deck your dude out in new duds.. The squirrels are back (complete Bright Eyed and Bushy Tailed Challenge by finding hidden squirrels in the first 8 tracks), and there’s no shortage of equally amusing challenges, ranging from completing x number of flips on zero-fault run to finding the hidden switch to turn off in-game turbines.

That sense of humor that made Trials so fun for me to play is still present, and seems to have impishly expanded upon itself. At the end of one level, you crash into a huge button that activates a large pod (that looks like the monster in the ATHF Movie); this shoots up and off, like a rocket, when you complete the race. Billboards bear advertisements with burgers garnished with green cheese, and refreshing, futuristic cola. As has become a staple of the Trials legacy, your rider comically screams in pain when he falls off cliffs, crashes into inexplicably placed boxes of C4 with an understated “OW!”, and makes frat boy cheering sounds on sweet jumps.

The challenges (3 per track) add depth and mischief to the campaign, often requiring you to sacrifice your character in order to complete the mission. Even the number of tries per track to complete the course seems like a joke (in Fusion, the number of retries has been raised to 500, up from 250 in previous games).

Once you surpass medium difficulty, you can activate FMX mode, where all of the tricks and skill-based riding makes its way back into play. Use the right thumb stick to execute all the coffins and bunny hops you’ve come to know and love, or learn them for the first time in career mode tutorials. While performing tricks in race mode is more of a novelty, you shouldn’t fret; there are still opportunities and challenges built in to the campaign.

Still available is the option to create custom tracks and race on courses made by others, and for the most part, Trials has brought the best of the game with it into Fusion. There’s still a quadbike available, as wells as levels made just for the 4×4 racer. There are skill challenges, new multiplayer and competitive modes, and Uplay account connection option that unlocks special features in the game.