Zombie Driver is ba-a-ck. Practically back from the dead, in fact. Publisher Cyberfront originally released both the console and PC versions of this popular driving game with an undead twist in 2012. The game was nixxed, however, once Cyberfront went bankrupt earlier in 2014, leaving Polish developer Exor Studios with its zombie-d*$% in its undead hand. Little has been spake of this fun-to-play zombie slasher that condones vehicular homicide (so long as the victim’s are already cold)…until now.

Duh-da-da-DAH! But if gamers thought they’d seen the last of this playfully gruesome title, well, they were dead wrong. Zombie Driver is back with an Ultimate Edition for only $14.99 on ID@Xbox. The game comes equipped with all the DLC that fans have come to know and love in previous releases, but there’s so much more to love in this new release for Xbox Live. The top-down perspective can be jarring at first in this vehicular combat game, but it makes sense once players get used to it, and was a cool throwback to old-school GTA. (I spent maybe an hour trying to write my name discernibly in the street before that got old.) 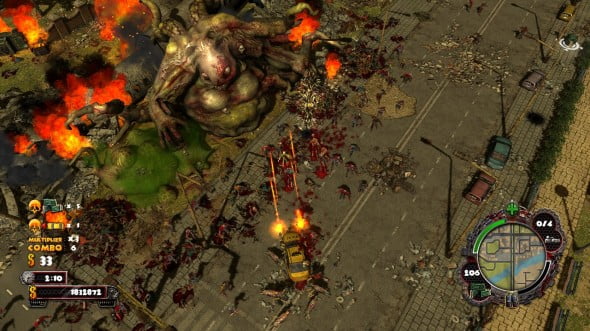 Developers report that in addition to more weapons and well over double the zombies, players will find 31 story missions, 36 unique Blood Race events, 9 Slaughter arenas and 15 vehicles to demolish corpses with. The visuals have been upgraded, too, at 60 frames-per and 1080p, making the whole experience pretty and entertaining.

That’s not the only thing that’s pretty in this game about rotting flesh and stumbling roadblocks. The lighting has been revamped for this Zombie Driver do-over, and it shows: textures seem to have higher resolution, the fog adds dimension to scenes, reflections and shadows are cast accurately, creating a real polish to the winding streets and walker littered public thoroughfares. Some other objects are newly animated, also, making this updated Zombie Driver, at least in my estimation, worth the money. Developers also report plans to release new challenges and achievements regularly following the game’s initial release to keep gamers coming back for more carnage. 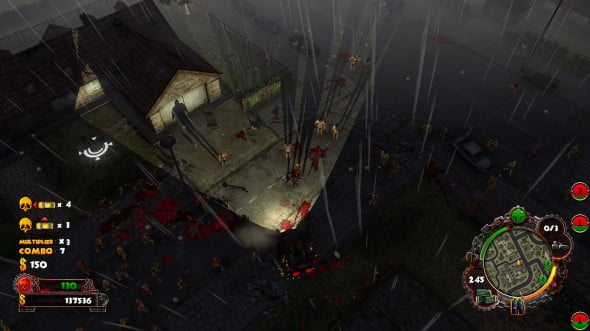 Boss fights aren’t necessarily something a person might anticipate in a zombie racing game, but then Zombie Driver defies labels like “racing game.” Sounds really cool, but the unfortunate sidenote is that these boss fights, along with the behavior of the zombies themselves, seem mechanical and repetitive. The artwork did not disappoint––the bosses were creative, and the blood skid marks that failed to disappear no matter how many passes a player made were a nice touch. Still, how amazing it would be to see developers tackle the problem of the zombie behaviors before challenges and achievements are updated to this classic game.

Blood Races have three distinct classes, all of which reminded me that Watch Dog’s game within-a-game was likely inspired by Zombie Driver. Race mode is a a racing classic but with a machine-gunning-zombies sort of slant. In Eliminator mode, players engage in a Need For Speed-esque takedown mission, eliminating as many vehicles as possible within the allotted timeframe. Endurance mode especially reminded me of WD, and involved a challenge that entailed trying to outrace a ticking bomb strapped to the zombie-killing cab. Reaching checkpoints extended the challenge time, and maneuvering around zombies never seemed more aggravating than in this challenge.

Weapons can be plentifully found around the city, which is a good thing since the undead are sort of boundless. Careen around streets over a sea of blood and watch the clouds of dust and veritable Etch-a-Sketch of sanguinous tire tracks trail behind you. Developers have added a cool feature that takes advantage of XBox One’s next-gen platform, introducing Game DVR Greatest Moments. Zombie Driver will automatically record clips of the game’s most prolific moments. That was cool. 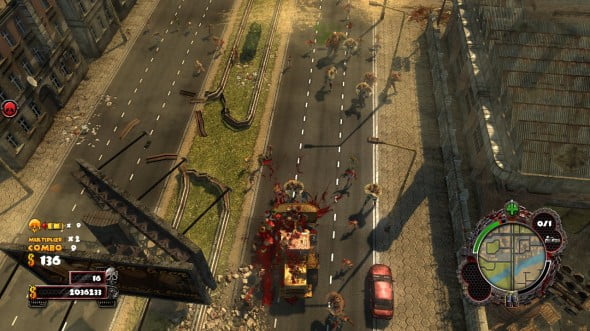 As players struggle to survive wave after wave zombified marauders, mounted weapons become the most effective way to mow down the afflicted. The expected range of weaponry is available:  flamethrowers, rocket launchers and rail guns, among other things help you shred the plagued. Players unlock 15 different rides, from a school bus of the undead (yes, that was an Aqua Teen reference) to the upgraded taxi that doubles as a Chariot of Death, and these rides are something. Slick, sleek, and everything a zombie mercenary could hope for, the cars on offer in Zombie Driver were one of the game’s highlights for this reviewer.

If there was one thing in particular that was a let down, it was the incongruity between the design and the plot evolution. The game seemed funny. Like, it seemed as if it was going to be funny. Have a real sense of humor about itself. But it kind of…didn’t? It’s hard to explain, but the dialogue, the exposition didn’t make any room for the campy jokes, puns or stereotype-based yucks that I anticipated from this title. Opportunity missed.