King’s Quest is admittedly a series I’m completely unfamiliar with, so you’ll excuse me for never feeling nostalgic about Sierra’s reboot. What intrigued me more, though, was to see how the final product would exist alongside Telltale Games’ recent offerings. King’s Quest offers another re-examination of what is otherwise a dead genre – the point-and-click adventure game – and comes away with a somewhat different take than Telltale or even Double Fine.

Whereas Double Fine’s Broken Age felt a lot more in line with adventure games of the nineties, Telltale’s The Walking Dead: The Game (and the mountain of other properties they’ve since inherited) was a reaction to gamers’ shorter attention spans and a greater interest in cinematic gameplay (not a knock against the game, just an observation). King’s Quest feels stuck somewhere between the two. It’s focus on story is just as strong as Telltale’s, though it’s reliance upon choices (in dialogue and action) aren’t nearly as prevalent. Instead, much more attention is paid to puzzle solving. 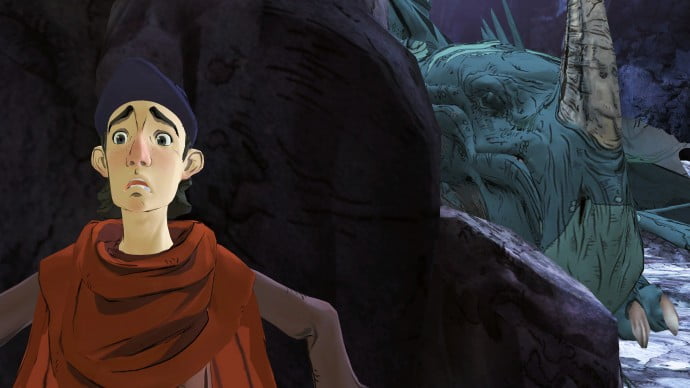 Puzzles are mostly solved the old-fashioned way, by using a specific item in a specific location at a specific time. Yes, it can be as tedious as that description sounds, but not quite as tedious as games in the genre used to be. There are basic on-screen notifications of when you’re near something which is interactive. For example, at one point some thick bushes block your way to a well which houses a dragon. An icon can be seen in the corner telling you these bushes are something you can interact with. Interacting with them prompts a dialogue from the narrator stating that the small hatchet he has is insufficient. Clues like this lead you to look for the necessary items, which are usually fairly obvious once you see them. It’s stuff like this that keeps the game from being too tedious.

The game’s reliance upon old mechanics really drags the entire experience down a peg or two, which is a shame because the narrative and presentation surrounding it are nothing short of fantastic.

King’s Quest is told as a flashback, as the old King Graham tells his granddaughter of his adventures leading up to him being crowned king. The story structure is a novel idea, and one that is sorely underused in gaming (think, Prince of Persia: The Sands of Time). It plays with ideas like unreliable narrator and almost-fourth-wall-breaking puns, as well as flashes between old Graham and young Graham. 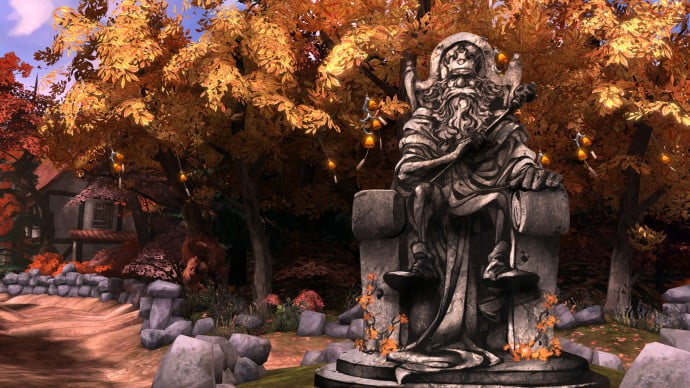 Young Graham is a young man with little going on in life. He seeks to become a knight, but must face off in a competition against four other worthy knights. Though the game starts strong with a sequence that takes place after the majority of the story, the middle of the game nearly overstays it’s welcome. You’re tasked with hunting down various items to complete objectives, and since there is no objective list or journal, there’s little to assist you in keeping track of all the goings on. This leads to quite a bit of backtracking and exploring relatively empty and boring roads for far too long.

Luckily, even the slowest bits (and, boy, are they slow) are held up thanks to some excellent voice acting. Christopher Lloyd (Yes, that Christopher Lloyd) leads an incredible cast, which includes voice actors from Spongebob Squarepants, Spectacular Spider-Man, and The Legend of Korra. Literally none of it feels poorly acted or out of place. The dialogue is oftentimes funny, but never hilarious, which is disappointing considering the talent involved. 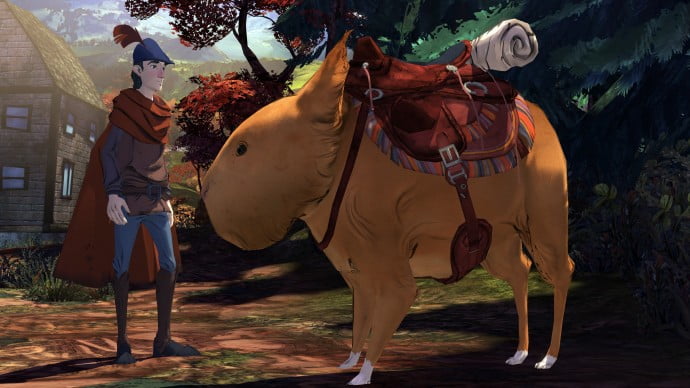 King’s Quest is absolutely beautiful to look at. It features graphics that would be best described as classic-Disney meets Pixar, featuring similar character and world designs to older Disney films, but the 3D vibrancy of Pixar. Certain characters lack much in the way of visual personality (especially a few of the knights and the dragon), but overall, they maintain a similar aesthetic that matches with the tone of the game.

A Knight to Remember is just the first of five episodes in King’s Quest. This review is meant to serve the purpose of discussing the gameplay, graphics, sound, etc. to let you, the reader, know if you’re on board or not. The story in episode 1 serves it’s purpose of setting up subsequent episodes as well as remaining intriguing through (for the most part).