I’m flying through space, enjoying the beautiful views of passing planets and asteroid belts, when BAM! Capitol ships warp in, and they’re not looking friendly. Their weapons are hot and they’re trying to hail me. I’m far outgunned, and can’t figure out why the law would want to trouble me, until they mention the five pallets of Narco Cola (an illegal drug-based soda product?) that I’ve been smuggling in my hold. I hit the button that says “I’ll see you in hell!” and it’s a frantic race to get back to warp before I become space dust. Encounters like this are make Rebel Galaxy a really fun romp through a derelict universe that screams “Wash me.”

I won’t lie, at first glance I thought Rebel Galaxy was going to be a bit boring. Everything in space is placed far away from each other (as they should be, because space), and every station I docked with looked like it was on the verge of falling to pieces. However, as gameplay progressed, this backwater universe became part of Rebel Galaxy’s charm, and set the stage for my career as a drug-smuggling, nerf herding, criminal, feared throughout the galaxy for my proficiency at running away.

The Story
I won’t say the main quest line is the highlight of this game, but it is also not bad. All of the characters I interacted with had something to bring to the table, with colorful personalities, and unique visuals. For me, the real draw was in the side missions, which is where I ended up spending most of my time. From the moment you enter the game, Rebel Galaxy lets you do whatever the hell you want. The goal is to carve your own path through the universe, making a name for yourself in whatever way you want to. For me this meant storming a space pirate cartel, and trying to sell them human organs (not my brightest idea), and subsequently becoming infamous with the local authorities and drug dealers alike.

The main storyline reminded me a lot of  Pirates of the Caribbean (the first one, the rest don’t exist)  in space. You set off on an adventure to meet up with a long lost relative, only to find out that they were into some pretty shady things in their time, and then subsequently choose to follow in their path, or diverge and become your own person. Unfortunately for this galaxy, I’ve always wanted to be a space pirate, and the law wasn’t going to stop me.
BROADSIDES!

Combat, as stated in our previous article, is very similar to the naval warfare of Assassin’s Creed. The ships you can buy in the game aren’t exactly agile, and focus more on the idea of pasting as many gun turrets to their surfaces as humanly (or alienly) possible. Rebel Galaxy provides a wealth of options for each ship (There are 6 in total), ranging from better gun turrets, to missiles, to more defensive or passive upgrades. This means that each player has the opportunity to build around their own fighting/fleeing style, and adds to the game’s replayability. One thing is for sure: Watching these junky behemoths clash on the backdrop of space garbage was always a joy.
In addition to your own ship, you can hire one mercenary at a time by going to the local bar. While initially these mercs have individual personalities to distinguish them, their dialogue quickly gets old and repetitive. All the same, I would definitely recommend hiring them as they are fairly cheap and will help you through some of the earlier missions that might otherwise leave you as a a molten piece of space dust. The bars also allow you to interact with bartenders to get bounties and talk local news in a fashion that reminded me a lot of Sid Meyer’s Pirates (one of the best pirate games ever made).

So you want to go legit?
Ok, so maybe robbing the innocent for their hard-earned goods isn’t your preferred style of gameplay. Rebel Galaxy allows for that by offering some more legal means of obtaining profits to upgrade your ship. Outside of the main quest line there are plenty of side missions. None of these really stand out for their story, but they’re usually a fun way to grab a few bucks and increase your standing with a particular station or faction. In addition to these missions, there is also the ability to mine minerals from asteroids, answer random distress calls, and enter into the trade system between ports. While I didn’t do a whole lot of mining, I did enjoy trading various goods (space slaves, drugs, and illegal weapons) between ports to make a quick buck. This system may look intimidating at first, but everything is color coded, making it easy to know when the right time to buy and sell is. 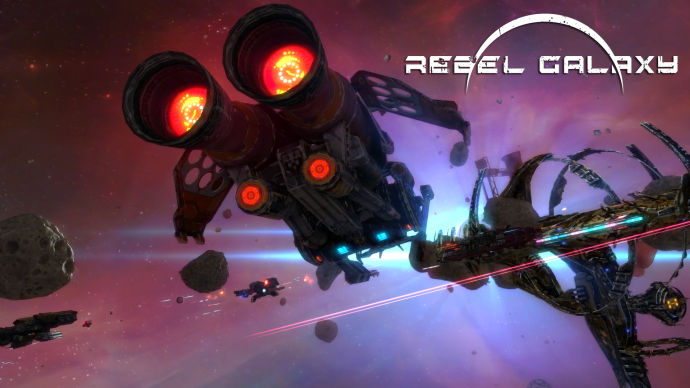 Finally, Rebel Galaxy’s universe is just flat out fun to explore. Navigation in a space game could be really overwhelming, but Rebel Galaxy limits you to one plane of travel by eliminating the y-axis. At first this felt a little bit restrictive, but I quickly realized that without it, there would just be far too much to explore. Even when flying on a flat plane, roaming the galaxy still feels satisfying, and at times challenging. For example, when warping between stations, I ran into an asteroid belt. Navigating through this without putting some dents in my precious “Old Boy” was just challenging enough to make me feel like Han Solo, and not so difficult as to put me in the company of Tie Pilots.

Verdict
Rebel Galaxy is just flat out fun. There’s nothing that really breaks the mold in this game, but it’s still a very enjoyable place to sink some hours into. With a lot of competition coming from No Man’s Sky, Star Citizen, and Elite Dangerous, Rebel Galaxy does good to set itself apart, by going back to the derelict space of Alien and Blade Runner. There’s no shiny fighter pilots here, only bulky broadside cannons, and seedy space captains. The game provides hours of exploration beyond the main quest line, and has multiple galaxies that help keep it fresh. Overall, I would highly recommend picking it up, especially if you’re a fan of some of the older sci-fi films.