For only being Wednesday, this week sure has not been kind to Bungie. To get you caught up, Bungie announced during E3 that Destiny’s newest expansion, The Taken King, was due to arrive in September. TTK is currently parceled into three different packages, with one being the Collector’s Edition which includes a bunch of in-game exclusives. The issue at hand is that current Destiny players who want all the goodies in the Collector’s Edition will be forced to repurchase both the base game and the two previous expansions, as there’s no other way to nab the Collector’s Edition exclusives.

On Monday, Eurogamer published an interview with Bungie’s Creative Director, Luke Smith, in which Smith answered some questions about TTK’s pricing. While the entire interview is a bit cringe-worthy, below are several noteworthy exchanges :

Luke Smith: All I can do is answer that with the same thing I just gave you… We’re really comfortable with the value we’re giving to players this autumn. I believe that once we begin to share more, players will be even more excited. And for existing players it also comes with the Founder’s pack with a new Sparrow, shader and emblem.

Eurogamer: Just not the emotes.

Luke Smith: It doesn’t because they come with the Collector’s Edition.

Luke Smith: Is it also the final question on the emotes?

Eurogamer: I’m not going to mention them again. I can’t get them.

Luke Smith: But you can if you buy the Collector’s Edition.

Eurogamer: I’m not going to buy the game and the two DLCs all over again.

Luke Smith: Okay, but first I want to poke at you on this a little bit.

Eurogamer: Poke at me?

Luke Smith: You’re feeling anxious because you want this exclusive content but you don’t know yet how much you want it. The notion of spending this money is making you anxious, I can see it –

Eurogamer: I do want them. I would buy them –

Luke Smith: If I fired up a video right now and showed you the emotes you would throw money at the screen.

Eurogamer: What I’m saying is that fan frustration is not because they don’t understand the proposition. It comes regardless of how cool the exclusive content is. The frustration – and mine as a fan – is that the method of acquiring it requires me to re-buy content I bought a year ago.

Luke Smith: [Long pause] It’s about value. The player’s assessment of the value of the content. 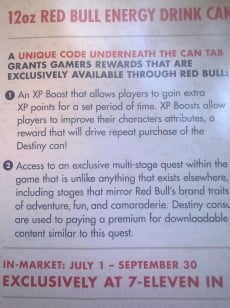 Then we have today’s Red Bull partnership announcement, where select Red Bull cans will contain codes redeemable for in-game XP boosts, as well as a “multi-stage quest” that will be exclusive to Red Bull consumers until January 2016.

Not only does the partnership itself hint at Destiny following in the marketing footsteps of Call of Duty that most of us have grown to hate, but a lot of negative feedback is also coming from the marketing and training materials that were sent out alongside the energy drinks. For example, one of the promotional sheets clearly states that:

Destiny consumers are used to paying a premium for downloadable content similar to this quest.

So now we’re looking at the fact that Bungie knows gamers will have to repurchase content they already own, but that it’s also okay because they’re really comfortable with the value they’re giving in return, and that it’s okay for them to have marketing-exclusive content because players are already used to paying for premium content.

Sadly Bungie has been fairly radio silent over both issues. On Tuesday, a simple tweet was posted in response to the Luke Smith interview:

We’ll cover the community feedback for our CE and veteran options in this week’s update. Please stand by.

While today, Bungie’s Community Manager, David Dague (DeeJ), tweeted the following in response to the silence over both issues in an attempt to explain why Bungie is waiting until Thursday to release their Weekly Update:

@gnomegineer We're working behind the scenes on solutions. I didn't want to placate you with words. It's important to get this right.

“It’s important to get this right.” Very true, David, but with this week’s events, Bungie will have to do some damn good repair work. With over 750+ hours of playtime, this writer will need some hefty convincing to stick around long enough to “become legend.”

UPDATE: Bungie has posted an early Weekly Update to try and get the community to put their pitchforks away. To sum it up, Luke Smith admits he’s an asshat and worded things the wrong way in his interview with Eurogamer, and Bungie is going to offer an upgrade option for previous Destiny players who want the Collector’s Edition exclusives.

Personally I think Bungie just backpeddled faster than Usain Bolt so I’ll be holding off until the dust fully settles.