Doh. Twentieth Century Fox Consumer Products and Xbox have officially announced a scheduled launch of content packs for The Simpsons on Minecraft Xbox 360 and Xbox One editions. Minecraft fans on PC know that players can make anything their heart desires on the desktop version of the game, but Xbox players are as of yet limited to downloadable content for many mods and skins.

This is big news, considering Minecraft has more than 100 million downloads worldwide since its 2009 PC release. The smartphone port for phones, it was announced just this month, has generated $30 million in sales to date. Xbox reports that there are currently 17 million Minecraft players active on their network.

Like The Simpsons, Minecraft is a true cultural phenomenon embraced by people of all ages, from every corner of the globe,” said Roz Nowicki, executive vice president of global sales and retail for Twentieth Century Fox Consumer Products. “We know fans of the show will have a ton of fun bringing the colorful characters of Springfield into the intricate worlds they’ve been building in Minecraft.

Microsoft paid $2.5bn to buy the game’s developer, Mojang, in 2014. The pack’s release debut announcement came with the rider that Minecraft owners on other platforms should “stay tuned” for the content on handhelds and PlayStation, prompting some to speculate that Xbox has first dibs on all Minecraft content from here on out.

The Simpsons aren’t the only ones on the roster of pop-culture icons who will live on in 8-bit infamy. Marge, Homer and Bart are in good company, joining characters from Marvel Avengers, Mass Effect, Skyrim, Star Wars, Doctor Who, and Halo in the Minecraft empire. Minecraft has also confirmed plans to release an adventure game in conjunction with TellTale Games, called Minecraft: Story Mode, on PC, Xbox, mobile, PlayStation and Mac devices, sometime in 2015.

We have an active community of more than 17 million die-hard Minecrafters on Xbox Live enjoying the wide range of downloadable content on Xbox, and they have been clamoring for us to bring Simpsons characters to the game,” said Phil Spencer, Head of Xbox. “We are thrilled to partner with Twentieth Century Fox and Gracie Films to bring The Simpsons to life on Minecraft Xbox 360 and Xbox One editions.  I can’t wait to see what the community creates.

Minecraft players on Xbox 360 and Xbox One can expect to see the DLC available sometime in late February. The pack, which costs a mere $1.99 will feature the entire Simpson’s family—Homer, Marge, Lisa, Bart and Maggie—as well as 19 other characters from the longest running scripted show in the history of television. 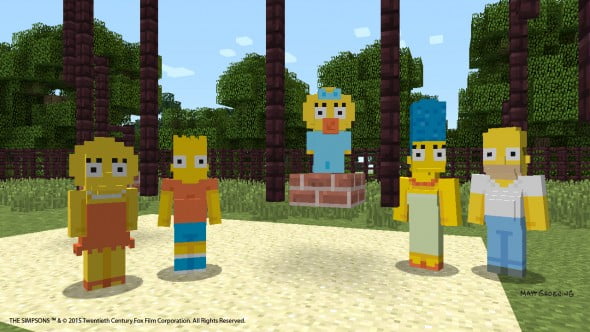 Mariah lives in Seattle, and is really 3 midgets inside a lady suit.