In what may prove to be a groundbreaking first for more to come, WayForward Technologies has announced an upcoming game that’s compatible with the Apple Watch. 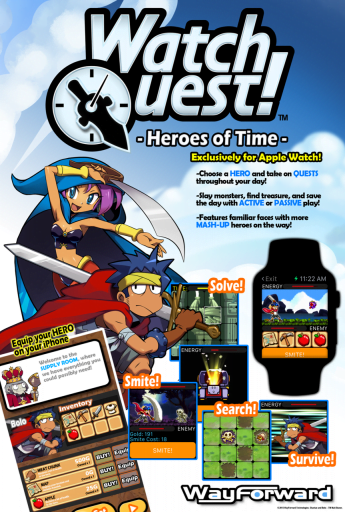 Watch Quest!: Heroes of Time, while playable across both the Apple Watch and the iPhone, is the first adventure-style game to run on Apple’s flagship wearable, and will be available for download on the same day the Apple Watch hits shelves, April 24th.

Watch Quest!, a free download that comes with a training quest, will also allow players to pay for missions and additional characters in the form of Quest Packs, fitting in to the already established mobile gaming market.

According to announcement poster, players will be able to “slay monsters, find treasure, and save the day with Active and Passive play,” indicating some system that implements background operation.

Gameplay revolves around choosing a hero and equipping them on the iPhone, and then guiding the Hero via the Apple Watch as he or she travels lands, battles monsters, solves puzzles, and searches for treasures.  Players are invited to play passively by selecting longer, easier quests and outfitting the hero up front – or by taking on more difficult quests which require foraging for items as you go.