A Walmart advertising poster leaked on Reddit may have given away details regarding a golden Mario amiibo, which will reportedly hit shelves alongside Mario Party 10 for the Wii U. 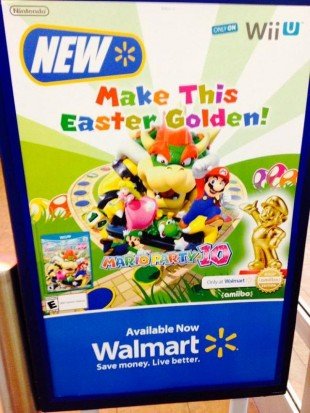 The poster states that the guilded Mario is available “only at Walmart”, and will launch  with the latest Mario Party  on March 20th. Rumors of a gold (and silver) Mario amiibo had already been circulating after someone discovered their Consumer Product Safety Improvement Act (CPSIA) certificates on Nintendo’s own website, though the listing have been removed from the page altogether.

While this is hardly the first amiibo exclusive – Meta Knight at Best Buy, Lucario at Toys ‘R Us, and Shulk at Gamestop – it does bring into question just how many variants of existing amiibo characters Nintendo plans on bringing out.

This news comes hot on the heels of the announcement that the Link amiibo was the best-selling figure so far. Which ones do you have?