Right out of the gate, I wanted to like Breach TD. The title, a free-to-play mobile release that is slated to make its way to the PC scene later this year, looks impressive. The graphics in the trailer are aboveboard for a mobile platform. While Breach is billed foremost as a tower defense game, there seems to be so much more on offer in this release than most players expect from their average tower defense (TD).

This Kickstarter-funded title fuses tower defense elements with some of the more fast-paced qualities of a real-time strategy game. In limited beta until March, I was eager to test out this unbroken mount. I had seen a little gameplay of the title in alpha, and even then the game seemed to be shaping up to be far-and-away one of the most delightful tower defense games I’ve seen in ages. Finally, I thought to myself, a TD game that’s doing something original. Breach looks as if they’re trying to break the mold a little bit (and I feel as if I can get behind that.), however, the fact remains that I expected this game to wow me from the get-go.

The game is billed by it’s creators as the spiritual successor to the number-one mod for Starcraft II, Squadron Tower Defense. Developed by Tyler Johnson, Breach TD is based on the arcade map for Squadron TD, which he also created. His was the most downloaded and most played mod for Starcraft II. 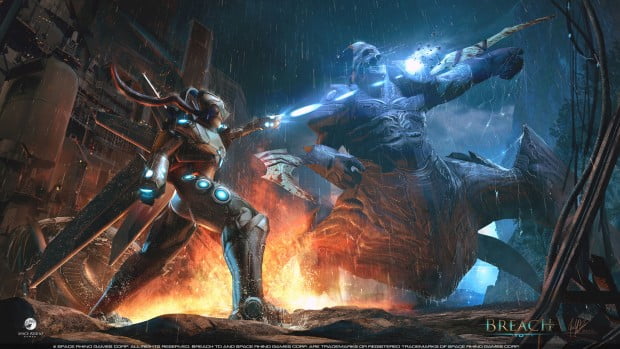 Breach builds on this mod, and immerses players in a fight against the fearsome Void Monsters, assembling Guardians to create the optimal defense squad. Players clash as they defend their tower against the Void, selecting heroes to take with them to the front lines.

Prior to the start of a game, players choose four Guardians, as well as two Relics. (From the looks of the preview, there may be an option to purchase more Relics in-game once the game is released.) For the time being, players select two abilities—called battle cards—that each player can use during the game to help devastate their opponent or heal their own forces. For example, Pillar of Light (which heals all nearby guardians) or Firestorm (which deals damage to all nearby enemies) are a few of the Relics to choose from.

One of the recent additions to the game’s beta build was the inclusion of a placement grid. Designers explain that the point of this is to facilitate the process of strategically placing units. Using this grid is supposed to help players build an effective guardian defense that can withstand the wave of void creatures/the opposing player. For my part, I found it a little unsightly. I understand the point behind it, and the idea was solid, but in practice, the grid seemed unnecessary after the first game. I thought this grid might best have been limited to tutorial mode.

Much of the interface that I saw looked like a work that was still in progress. The buttons and slots on the main menu were bulky, not unlike what you might expect from a mobile game, though you should not expect them to be permanent. The alpha and beta menus bore many strikingly similar features, so if the plan is to do something completely different for the game’s release, I have less than zero clue what that backdrop or interface could look like. I’ve seen some great wallpaper-looking stills from the game promotions that I think would complement the start menu a million times more than the three teal buttons afloat on a midnight blue background. 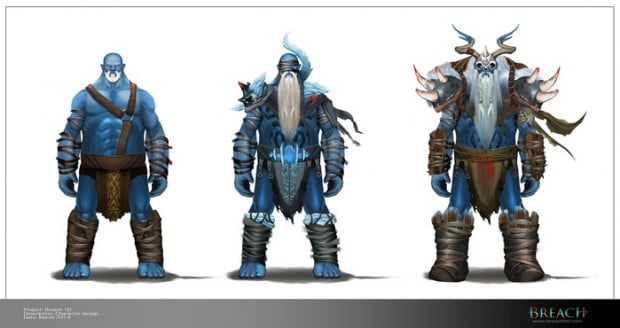 Players select from 1 vs 1, Solo or 3 vs 3 play mode in Breach TD. The limited beta only allowed for Solo and Training mode. There are 16 Guardians to choose from, each with their own strengths in regards to damage and defense, as well as their own skills and upgrades. The characters are listed with their title, power level, and their recommended use (as in “Recommended Use: Waves 1-5”). Just like the towers in a traditional tower defense game, the Guardians in Breach can be upgraded into other classes, such as warriors, in order to hold off the Void’s increasingly stronger waves of creatures.

The game itself is rich and involved, visually. Graphically robust, the backdrops in Breach are impressive for a mobile offering, and even more impressive in the menus and in cinematic trailers. Characters look like what one might expect to see from a PC or console offering: crisp, with polished features and great detail. There is a wave of glowing flotsam carried past on an errant digital breeze as your guardians make their way to the fray. There’s a spiral pan down to the battlefield at the beginning of each wave, adding dimension to the environment.

The scenes, however, can seem somewhat flat. The backdrop is visually consistent, but also less than what you might have anticipated based on trailers. The plight of audio, I felt, ran parallel to the plight of the visuals: the background and menu music were really fantastic, well-produced and thoughtful. The in-game sound effects, however, sound slightly tinny and unoriginal.

There’s a kind of timer bar at the top of the screen that lists each wave number, and counts down to the wave that is about to begin; this is called the Building Phase. Players are unable to start until that wave progress bar empties, which begins to get sort of stifling after about 10 waves. It’s actually a very small space of time that players are waiting to attack during this building phase—a matter of just over 15 seconds, maybe—but that wait seems unbearable if players aren’t using that time to upgrade their Guardians. Players can use that space of time to spend the currency they’ve earned by defeating their opponent, buying new guardians to place around the grid or upgrading those that they already have. But I mostly spent that time wondering why there wasn’t an option to skip over this and move straight into battle. Again, I imagine this is something that will change once the game is finally released.

During attacks, players can use plasma to send rift attacks as well as engage relics. Players can control the production of plasma by upgrading it just as they might their guardian. Rift attacks are useful in debilitating the enemy and increasing the odds of success during each progressive wave. I might be confused about this, but I couldn’t see any evidence that my rift attack was in effect. Effects that were generated from Relics were accompanied by beautifully rendered fire-storms or magical beams of healing energy, but the rift attacks not so much.

My preview was made difficult to complete because I wasn’t able to load 1v1 game play but once. Don’t get me wrong—I tried every chance I had. I imagine that, because it was Breach is a limited beta offering, maybe I just was on at a time when no one else was? Or there was a hiccup in the server? Or the game hated me? One of those things has to be true, because I engaged in one player-versus-player match, only to be disconnected halfway through. In fairness, I am happy to report that the game was much more engaging in versus-mode; the match seemed more unpredictable and strategic, and it gave me an opportunity to see a number of champions on the board at once.

I am wary to say anything unpleasant about Breach, just because I have high hopes for Space Rhino. Based out of Puerto Rico, this team of developers shows what I think could be great promise. However, I still am hoping to see more. A life bar, for instance, for both foes and Guardians. I would like to see the main menu amped up and polished. It would be a great change to see a little more detail in the battles—particularly boss battles. The artwork and  trailers for this game all show such a great amount of promise. I would love to see that oath fulfilled once Breach TD is released in all of its final glory.