Note: It’s highly recommended you read the first episode’s review if you have not yet played the series, or have not decided to purchase yet. This will delve into spoilers for episode two pretty quickly.

I stated in my last review that I would structure these reviews differently than most reviews. The first part would focus on the bigger picture and the more technical aspects. Since nothing technically has changed from one episode to another, this spoiler-free section will be much shorter than the last. In fact, I only have two things to say. The series is still good, and heading in the right direction. It’s a much prettier, and thus more cinematic, experience. The camera angles feel more like a movie than ever before, and that, again, lends to it feeling more and more like a Hollywood production.

However, I noted previously that if I encountered serious bugs or technical issues, I would note them as soon as they sprung up. And with my moving on to episode 2, I hit my first major snag. Everything I had done had been erased due to some sort of error communicating with the cloud saves. Keep in mind, these are not Steam Cloud saves, but rather Telltale’s proprietary save system. My assumption is that this is created so you can move saves from one console generation to the next without having to worry about losing progress, but it’s becoming more of a problem than anything. I checked on my save for Minecraft Story Mode and Batman and sure enough, I had the same issues with those as well. I was forced replay the first episode of The Walking Dead Season 3 after turning this feature off.

Episode 2 opens with a flashback, and looks to further establish the relationship between Javi and his sister-in-law Kate. The flashback also serves to further illustrate the animosity between Javi and his brother – and Kate’s husband – David. David clearly has some anger issues, and he’s a man of discipline and action. The scene paints David as a strict post-military ass-hole, and Javi as the younger, kinder brother who is in love with his brother’s wife. Kate’s stuck somewhere between, with apparent feelings for both brothers. It’s a really great moment for the series, especially after reflecting upon the shocking ending (which we’ll get to).

The episode moves at a breakneck speed from there out. It took me roughly 2 hours to complete, but in that time we saw the return of the New Frontier as they attacked and desimated Javi and company’s new found home. Lots of people die and the ones you expect to survive survive. The idea to move the characters from location to location so fast seems to be a reaction to criticism of the television show and comic books, which both take an absurd amount of time to leave a specific location. 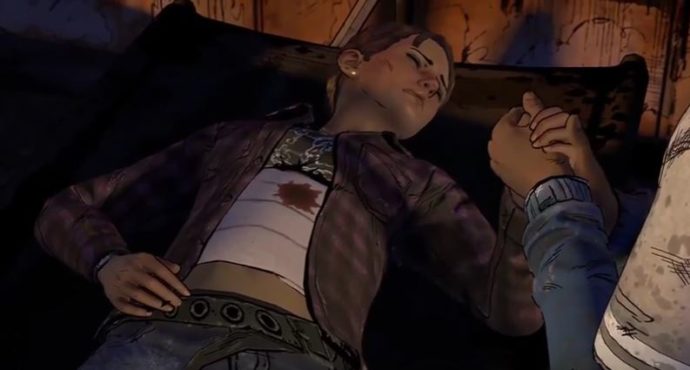 Telltale’s move is jarring and, since we hadn’t had any time to really get comfortable, not all that effective. We see dozens of people get killed by zombies and bad guys, but what does it matter? We just met these people, and in The Walking Dead there has to be a balance between character-growth moments and zombie-horde scenes. Telltale certainly makes up for it later on, but it wouldn’t have bothered me spending a bit more time in Prescott.

The scene that perhaps provided the most tension, however, was the stand off between The New Frontier and the people of Prescott. Finding the balance to try to save lives was really great, and super intense. The outcome, at least in my playthrough, of Clem shooting one of the bad guys and kicking into motion the proceeding events really put her in a new light. It made me question a lot about Clem, a character I thought I knew really well. Hell, I made her what she is over 2 other games, so I turned her into the machine she is this season. Because of this, I kind of grew to distrust her motives.

Following the destruction of Prescott, the crew decides to head for Richmond. 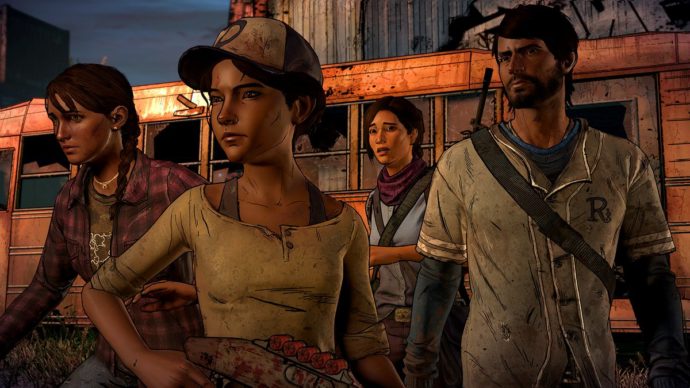 Along the way, tensions rise and we see Javi’s nephew, Gabe, pull a gun on Conrad, an ally from Prescott and the husband to a woman the New Frontier had just killed. Conrad believes that Javi is to blame for her death, and Gabe pulls a gun on him as a result. Eventually Javi talks Gabe down, but I’d bet this isn’t the last time we see an aggressive Gabe. The crew eventually meets Jesus, a character from the comics, who reveals that Richmond has been taken over by the New Frontier. Javi decides the risk is worth it to save Kate’s life, as it’s expected the city has sufficient medical supplies. Jesus accompanies the group as they head through an old train tunnel to get to Richmond faster.

Within the tunnels, Clem confides in Javi that she, at one point, was a member of the New Frontier, even displaying the brand upon her arm to prove it. She doesn’t want to go back to Richmond because of it. As the group nears the end of the tunnel, Conrad grabs Gabe and holds him hostage, claiming he overheard that Clem was formerly with the New Frontier. He wants to use her as a bargaining chip for their safety. The game gives you the choice to either agree to his plan, or defend Clem. My choice to defend Clem wound up with Javi killing Conrad. Gabe and Javi leave, and Clem decides to leave the group, not wanting to go to Richmond. 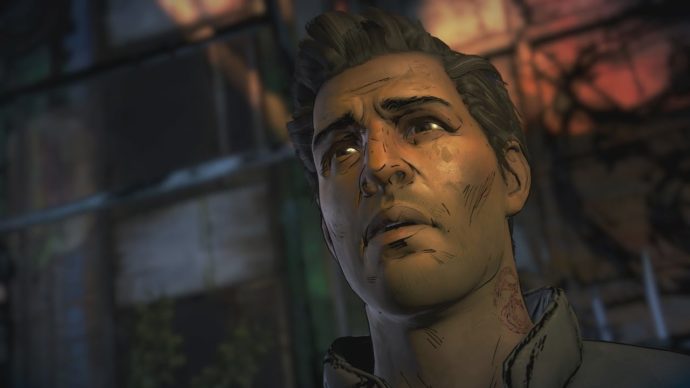 The final big reveal, of course, is that David – remember Javi’s tough brother? – is the leader of The New Frontier. It puts a lot of the narrative into perspective, especially the first scene of the episode. Surely David will expect his family to care about him, but his wife and brother have clearly moved on. Does David know about Javi and Kate? Does Gabe? How’s David going to respond to a dead daughter? Or Gabe to an absent father?

The reveal leaves a lot of very important questions, many of which I’m sure will be addressed quickly in the following episode. Sure, there’s a massive amount of convenience here, but it also shows that we, the audience, made a lot of assumptions. I had assumed that David had died, and as a result his wife and children stuck with his brother. I also assumed that The New Frontier were the bonafide bad guys, but now I’m second guessing that.