Fortnite is a survival crafting hybrid that takes place in the post-apocalyptic wake of a massive purple storm that has given rise to a zombie army of creatures called Husks. The player’s main objective is to craft bases, traps and weaponry to defend against hordes of these monsters, while also trying to save other survivors and find loot. The game is currently in early access and can be purchased at four tiers with various bonuses ($39.99-$149.99), but will become free-to-play at some point in 2018.

Fortnite’s levels almost feel like they’ve been cropped out of an old-school 3D platformer. With a cartoony art style and bright visuals, it’s hard to imagine that the world players initially enter is post-apocalyptic (until you run into the hoards of the undead that is). Players choose one of four heroes each with a unique specialty that supports a specific style of gameplay (crafting, shooting, melee), then it’s off into the world to find survivors and defend against the endless hordes. The levels in Fortnite are fairly big and offer plenty of area for exploration, which is good, because while core gameplay revolves around defending forts, players first have to acquire resources to build said forts. This is Fortnite’s main gameplay loop: Break things for resources, find loot, build a base, defend against waves of zombies, break more things, collect more loot. There’s some variation on this depending on the level, but for the most part, it’s very similar (so far at least). 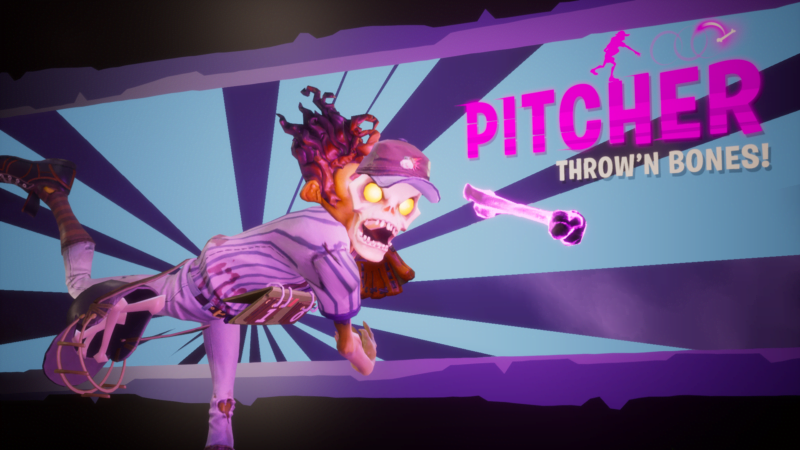 The enemies players fight have a fun variety, and each type feels unique. I won’t go into all the various Husk forms here, but there is an excellent wiki that does! While the enemy aesthetics may differ, in the end they’re all trying to do the same thing, break your fort, and destroy whatever’s inside it. This leads to one of Fortnite’s two main mechanics, base building.

Building a base in Fortnite feels is a lot like the build system from Fallout 4. Players can choose from walls, stairs, roofs, and floors. Each of these pieces can be built from wood, stone or metal, and can be edited in a 3×3 grid. Taking away pieces of this grid will result in different types of building pieces like the door pictured below.  While the building system is very simple, it makes it easy for new players to jump in and make a base that feels cool.

Once players have built a base, it’s time to defend, and there are three ways to do it.

Weapons – They help you shoot Husks, enough said, right? Not entirely. Weapons have physical characteristics such as fire rate, damage, and type (shotgun vs sniper, etc.), but they’ve also got a rarity assigned to them which will influence various attributes. So, while on the one hand a double-barreled shotgun might seem sweet, it might not be the best if it’s only common rarity. Weapons can either be acquired directly through loot drops (more on those later), or through weapon schematics which allows you to create them again when their durability runs out. There’s quite a few to choose from, and plenty of individual stats to obsess over.

Traps – Similar to weapons, only you place them on buildings, and then they kill husks. These also have the same rarity system, display a DPS counter, and can be crafted from schematics.

Survivors – These are characters that serve functions both actively and passively in the game. Before each match, a player can slot in squad members for bonuses, as well as additional help from AI during wave defenses (although be warned, you have to supply them with your precious bullets and guns). Survivors can also be assigned to passive squads which can help defend a fort, explore the lands beyond it, or generally increase fort stats. For an awesome explanation of a somewhat complicated system, check out this Reddit post.

Fortnite also has a pretty hefty upgrade system where weapons, survivors, and traps can be upgraded using XP cards. It’s the classic catch-22 of free-to-play games: Do I upgrade the gun I have now? Or save my XP and upgrade the rarer gun I’m going to get later? Honestly, I have no idea with this one. It’s tough to tell because the version of the game I was given came with several premium weapons, and it’s unclear how regular loot is going to stack up against them. Upgrades get pricier as weapons get progressively higher level, and while XP cards are plentiful, it’s worth trying out a weapon to see if you like the style before investing heavily in it.

Currency in Fortnite is simple at the moment. In its early access state, there are currently only two forms: V-Bucks and Founder’s Coins. V-Bucks can be earned through missions or purchased through real money currency (RMC) and are spent in the Vindertech store to buy llamas (more on that in a minute). Founders coins are only available to players who purchase founder’s packs and will likely disappear when the game goes fully free to play. Alright, back to the llamas (because I promised). 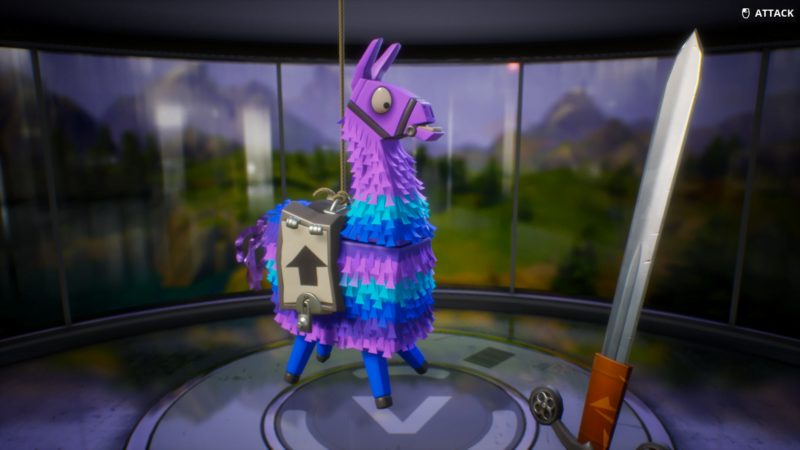 Loot in Fortnite can be a bit overwhelming at first, but thankfully, it comes in the form of furry piñatas. Llama Piñatas are Fortnite’s version of loot boxes and they come in several types: Mini Reward Llama – Common rewards from completing tasks, Upgrade Llama – 100 V-Bucks, four items including a rare, Launch Event Llama – 100 Founder’s Coins, includes one founder’s epic weapon, and Random Category Llamas – Varying price, contain specific weapons, traps, or crafting items. To add one final layer of complexity to this loot system, Llamas have a random chance to upgrade which gives them a higher probability of dropping better loot.

Ok, so we’ve covered loot boxes, and basic currency, but there are still more ways to obtain loot (I did say it’s a bit overwhelming). During gameplay, players can search the map for loot chests that vary in appearance (from pirate looking chests to bank safes) and contain randomized loot that can be very useful. The trick about these is, once a player grabs it, it’s gone for everyone, so they’re a very selfish loot form. In addition to these chests, players also get more chests at the end of a match as a reward for completing a mission. The rarity and quantity of items in these chests varies based on how well a team completes mission objectives.

Alright, one last way to get some sweet, sweet loot, mission objectives. These are pre-determined sets of gear that you can see before you complete them. They don’t have the same appeal as bashing in a sarcastic mechanical llama, but they provide useful gear.

Finally, after completing missions, killing husks and busting open piñatas, players have skill points they can spend to augment characters to their playstyle. The skill trees in Fortnite are also very robust, but thankfully start simple to help ease the player in. These work like most RPGs, where players follow a predetermined path for the first few skills (increasing health, improving mining, etc.), but then quickly branch out into more specific areas. 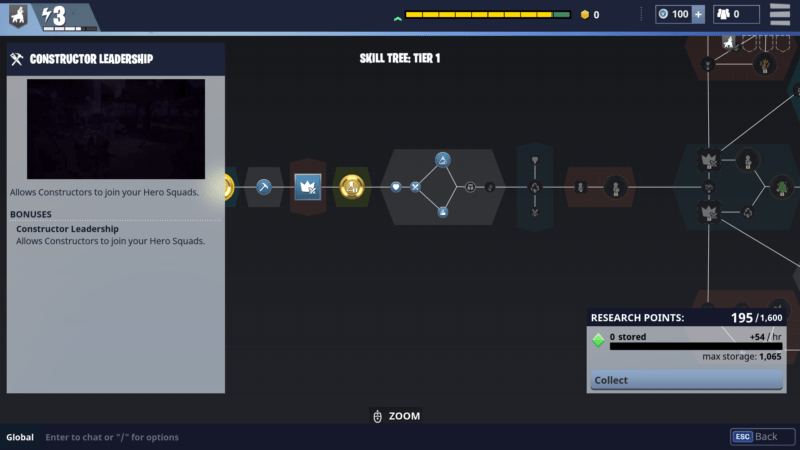 Should I Buy It?

Honestly, it’s hard to say. Fortnite is a lot of fun, and looks like it’s got a lot to offer, but it’s also going to be free-to-play at some point in its future. What it’s really going to come down to is whether or not the late game content is locked behind pay walls, because even at the beginning, Fortnite is full to the brim with gacha mechanics. I’ve enjoyed what I’ve played so far, and will be going back for more, but there’s always the risk of a F2P title becoming pay-to-win.

Alright, now that you’ve been overloaded with a wall of text, here’s a list of 5 tips to get you started: