In case you’ve been living under a rock lately, the Nintendo SNES Classic recently released with limited supply and not-so-limited demand. Pre-orders originally went up on many sites in the middle of the night around the country, and subsequently sold out in minutes, but we were lucky enough to get a hold of one. 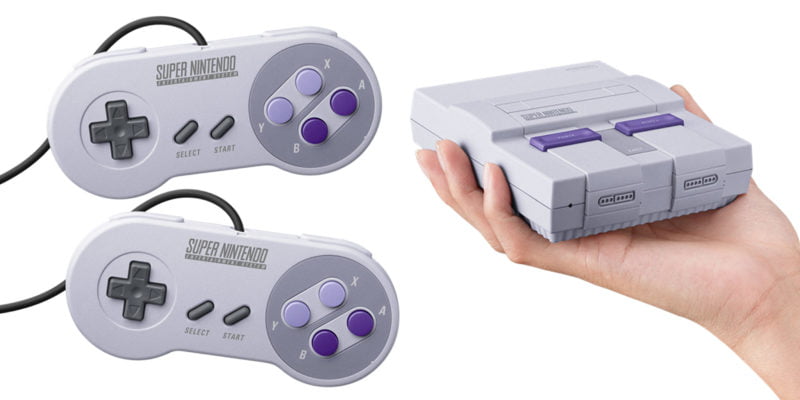 Two major things jumped out as I unboxed the device: This thing is tiny, and it’s incredibly light (as are the controllers). However, while the SNES Classic might be light in terms of weight, it is anything but in terms of content.

The SNES Classic comes with 20 games most of us know and love, as well as a previously unreleased game, Star Fox 2. These classics represent a wide variety of genres, including Racing – F-Zero and Mario Kart, Metroidvania – quite literally: Super Metroid and Super Castlevania IV, Platforming – Yoshi’s Island, Super Mario World, Donkey Kong Country, Kirby Super Star, Mega Man X, RPGs – Super Mario RPG: Legend of the Seven Stars, Secret of Mana, EarthBound, and Final Fantasy III (the best in the franchise) not to mention several others including The Legend of Zelda: A Link to the Past, Super Ghouls ’n Ghosts, Contra III: The Alien Wars, Star Fox, and Super Punch-Out!!. There’s no shortage of history in this box, even if we were left with a few games curiously left off – Chrono Trigger comes to mind.

The box is a simple plug and play device (no 3 hours of updates once connected to the internet), including a power adapter, HDMI cable, and 2 controllers. The size of the SNESC allows it to be placed pretty much anywhere, and you don’t have to worry about overheating and airflow (hopefully we don’t need to worry about the box turning yellow as well, like its namesake). That being said, it needs to be placed somewhere close, as the controller cords are only around 3 feet long.

The interface for the SNES Classic is pretty smooth and simple. Similar to the Switch, you can scroll to the left or right through tiles for each game. It also includes a block of save states, which are incredibly helpful in games like Contra III: The Alien Wars and Castlevania IV. Once you pick a game, you’re brought to the opening splash screen for it (cue nostalgia, lots and lots of nostalgia), and it’s like being back in front of that old CRT you played on as a kid. When you’re done playing, however, you can’t simply go back to the game selection screen, you need to hit the reset button, which can get annoying fast if you swap around games frequently.

One last thing to note: While I highlighted the fantastic selection of games, you might have noticed the acute lack of 2-player games. Sure we have a few games like Super Mario Kart and Contra III, but there are very few games where both players could play at the same time. The device lists games as 1 or 2 players, but many of the 2 player games dabbled on the fringe of multiplayer (eg. Final Fantasy III?). Donkey Kong Country and Super Mario World are essentially turn based games instead of couch co-op, which is fine, if they weren’t 2 of what feels like only 5 multiplayer games. This feels like a huge miss, when we could have had Goof Troop (I know, Disney most likely would have asked for an arm and a leg), Turtles in Time, Smash TV, or Zombies Ate My Neighbors.

Overall, I’m really enjoying the SNES Classic. The nostalgia can be overwhelming at times, especially when muscle memory somehow still takes over in the early stages of games like Donkey Kong Country and Super Mario World, finding all the secrets in the first island. If you can find one of these, I highly recommend snapping it up. There’s a lot of history on this machine, and the trip down memory lane alone is worth the price of admission.