After getting some time to talk with the Elder Scrolls: Legends developers at PAX West, I decided to try the game out for myself, and a few hours later I was hooked. As a Hearthstone player, it’s always tough to stray away because it feels like starting over from the ground up again. ES Legends helps alleviate some of this pain with an extensive story-based tutorials that helps the player build up a significant amount of cards so that by the time they reach the stage of battling other players, they can hold their own. Matt Nass, Kevin Spark, and Paul Dennen, some of the game’s designers, answered a few of our questions about the game’s future and its current position in the market.

What are some of the features you think set ES Legends apart from the other CCGs currently on the market?

Matt Nass (MN): Legends has a number of stand-out features that set it apart from the other card games out there, but the most immediate ones are probably Prophesies, Lanes and Runes. Lanes allow for really dynamic gameplay and open up cool design possibilities, such as movement cards. The choice of which Lane you deploy your forces to opens up a range of strategic options and helps prevent games from snowballing if one player seizes an early advantage.

Similarly, the Rune and Prophecy system means that if you do fall behind you’ll find yourself drawing extra cards – that you can sometimes play for free! This system allows for some really great comebacks and makes turns feel more interactive. Games swinging on the back of a prophecy is exciting for both players and viewers of Legends. 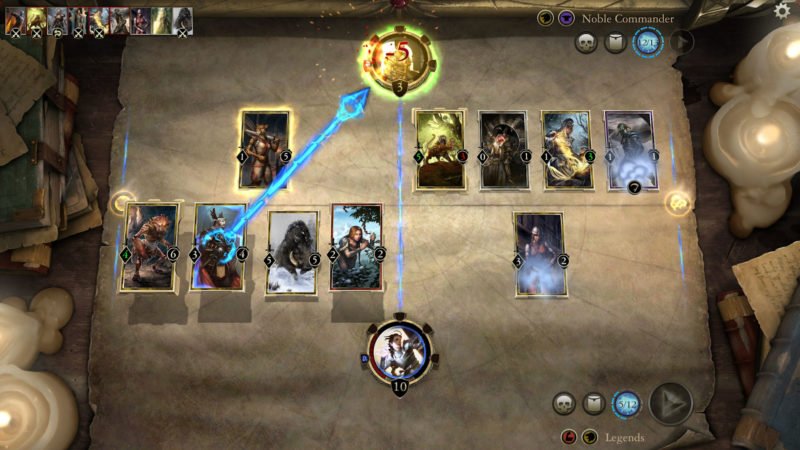 What are some ways you’re trying to tie the massive lore of the ES into a card game?

Kevin Spak (KS): We’re always really conscious of the lore, and trying to offer both things you’re going to recognize, and corners of the universe you haven’t seen before.

In our story content, for example, we’ve gotten to show fans some really dramatic moments that previously they could only read about in lore books, and hopefully expand on what was written in those books in an exciting and satisfying way.

With our cards, we’ve tried hard to include loads of familiar elements from the series. These games are just full of cool characters, giant monsters, and unique items, which makes our job easy in one sense, but also gives us a lot to live up to. When you’re making a character like Alduin, you really want to deliver on what makes him awesome and memorable. But we’ve also tried to show off some things that have only been hinted at. You take a character like Garnag, who’s previously only been mentioned briefly in Cicero’s Journal, and turn him into a card, and suddenly that character is a lot more real and tangible to people. And we got unreasonably, dorkily excited when we got the okay to give the world its first look at a Swamp Leviathan.

What are some of your favorite cards and why?

MN: My favorite card is Altar of Despair. What makes Altar so special is that there are so many different ways to play with it. In addition to working with any attribute combination, there are also a ton of things to try in each attribute. I’ve probably played over a hundred hours of Altar of Despair, and I still feel like there’s a lot to explore.

KS: I have to give a shout out to Grand Ball. I’m a sucker for movement effects, because they accentuate some of the cool tactical implications of the lane system, and while Grand Ball isn’t the most powerful move card, it certainly is the biggest. It’s the kind of card that’s going to do something a little different every time you play it, and frequently make you feel more clever than you have any right to. Plus our art team just knocked the VFX for it out of the park. 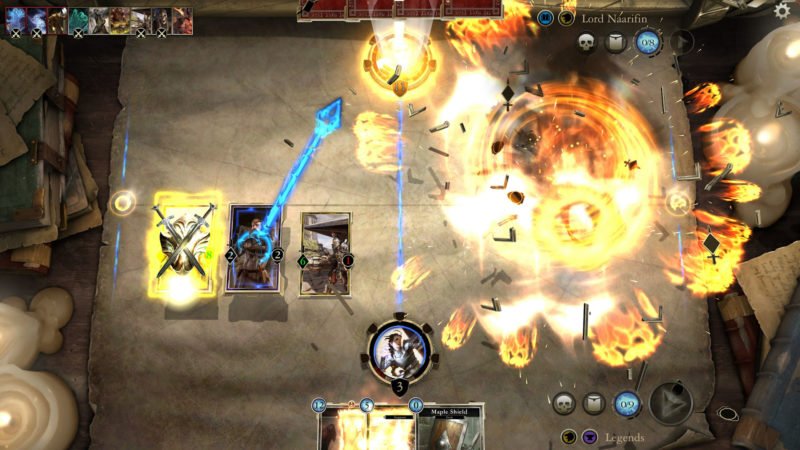 How do you plan on keeping the game accessible to new players as the game progresses and adds new sets?

Paul Dennen (PD): Balancing a game like Legends requires that we be attentive both to players who’ve been with us from day one and players who are on their day one. It’s a tricky thing, and we’re always looking at data about play patterns and collection speed to make sure we’re serving as many players as we can the best we can. One of the specific places where you see that play out is in the free theme decks that accompanied Heroes of Skyrim to help newer players get into the expansion content in a way that sets the table, but isn’t overwhelming.

What are some plans you have for future expansions? If you can say that is.

PD: One of the great things about working within so expansive a gameworld is that there is a nearly limitless well of source material to draw upon. We’ve got a lot in the pipeline for Legends – both content that’s familiar to fans of the series, and some new twists that have been hinted at but never fully explored. There’s a lot more to come, and it’s a great time to get into the game.

Finally, any advice for new players who are just starting CCGs, or coming over from another?

PD: Whether you’re an old pro or new to the genre, the best advice I can give you is to dabble. Find the cards, strategies, and styles that appeal to you as a player, and begin your exploration there. Whether you want to smash your opponents into dust with a horde of orcs, control the battlefield with powerful spells, or build an army of massive dragons, Legends has something for you. There’s some great PVE content to help you get started, and amazing community deckbuilding resources when you’re ready to dive into PVP play. No matter where you’re starting as a player, Legends is ready to continue your adventure.

Big thanks to the Elder Scrolls: Legends design crew for answering our questions. We’ll have more articles/streams centered around ES Legends coming soon, so subscribe for more info!