You’ve recently smashed your pre-order record for the series, how does it feel?

Richard Aldridge: [Laughs] It’s wonderful, I think for us as developers, it’s lovely to get the feedback from the fans whether it’s positive or negative. And it really confirms, especially through all the positive comments, that we’re on the right track; creating the diversity between the game’s races, which is absolutely one of our four pillars. In Warhammer 2 we’ll start to notice more differences on the battlefield. For example: The Dark Elves have the murderer’s prowess feature, which is all about them killing and becoming sadistic. The Skaven have loads of great mechanics that interweave between the campaign and battle. They can summon clan rats to sneak up behind artillery, you can use it to shortchange the development process of cities in the campaign, but there’s always a trade-off. If you use too many of these abilities you might run out of food and your campaign will suffer for it.

RA: The biggest change is bringing in a brand-new campaign, which is heavily narrated with proper cinematics. And it also allows you to lose for the first time as well. You’re going to fight right up until the very end, which normally a lot of people might drop off when they feel like they’ve done everything they need to, and it’s not like that in the campaign for Warhammer 2. You’re going to battle right to the end with the other three races and you’re going to get a nice story for why this vortex [speaking of the great vortex created by the High Elves] is so powerful, what’s it doing, why do the forces of evil like the Skaven and Dark Elves manipulate it, and why do the High Elves want to protect it. 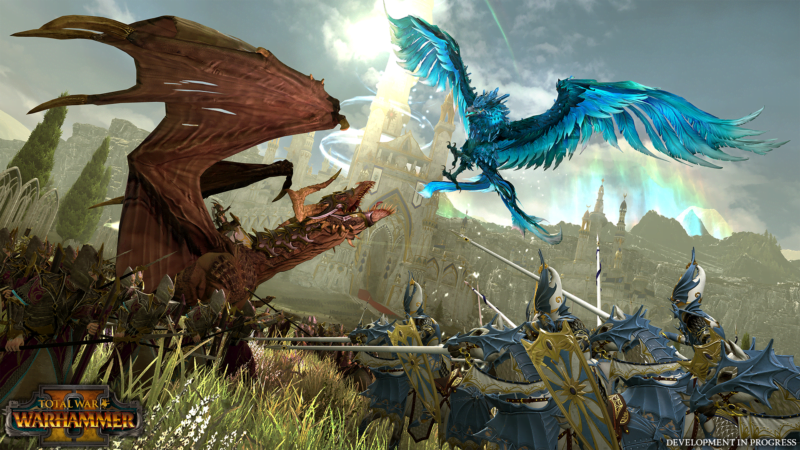 What was the biggest piece of feedback you got from Total Warhammer 1 that you took into the creation of the sequel?

RA: Most of it isn’t so much about the change, it’s about how we keep pushing and keep realizing what people are liking about it, but we have changed a few things. One of the big areas is definitely the UI. We saw that people were struggling with understanding some of the mechanics, so we made a concerted effort there to really trying to help people. We’ve added a new readying icon to show people that a unit has come back into the battle. In the campaign, we’ve also added a notification that lets you know you forgot to move a character, or if a building can be constructed, and you can choose which notifications to receive. It goes a long way towards having a more fluid and enjoyable campaign.

What sparked the Total War series’ move to Warhammer?

RA: Loads of us are Warhammer geeks. I love the Lizard Men, so seeing the carnosaur (pictured below) at PAX is super cool. It just felt like a good fit. It was one of those things that people had toyed around with for a while, and thought maybe that might work. Warhammer isn’t known for its world, it’s more the battles with a rich deep lore, but it’s never been realized as a physical map so to speak in a game. But of course, with Total War, that’s exactly what it is, so that seemed like a logical step to take. Now that we’ve gotten both parties together, it’s just wonderful. We love working with Games Workshop, they’re providing all the great source material, because we want to respect their lore and do it justice, and the thing with Warhammer 2 is that it’s really showing off the best of what they created. No other fantasy universe has crazy, scientific, mangling rat men, and dinosaurs riding dinosaurs shooting lasers. 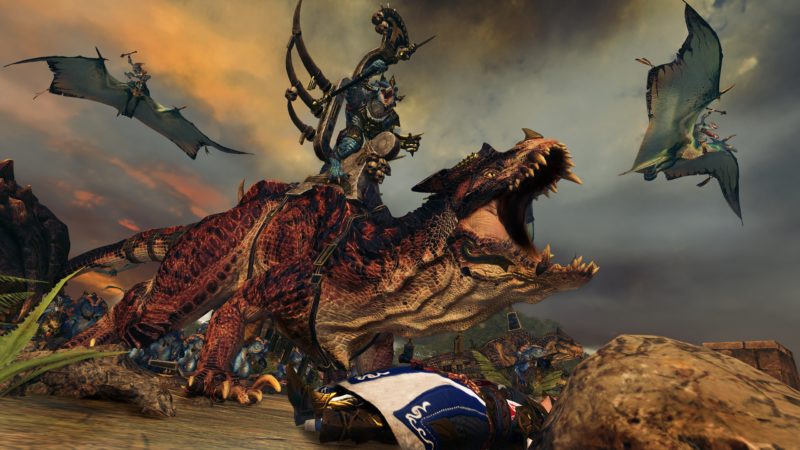 What are some games that Total Warhammer takes inspiration from?

RA: I think a whole suite of different things. Obviously, we stay true stay true to the Total War flavor and franchise, and we want to respect that and keep the original fans on board as much as possible. Not everyone is going to enjoy a fantasy setting, but more and more are coming to there. Inspiration comes from all sorts of sources; TV, film, books. The Warhammer Army books and the Forge World stuff that we’ve been allowed to use provides so much, and then it’s really about: Ok how is that thing going to move? What’s it going to sound like? Because many of these things have never been voiced or animated in a game before, so you might take a nature documentary to try to figure out how a boar beast might move. Or for the lizard men it’s all about looking at crocodiles and other reptilian creatures, just to take some flavor and inspiration, but then also add some punchy fantasy thing on top. Other things are pure imagination across the team. Take the he hell pit abomination; I’ve never seen anything else like that. It’s like mutated rats all stuck together with a massive wheel beneath its belly, and it looks great in game. 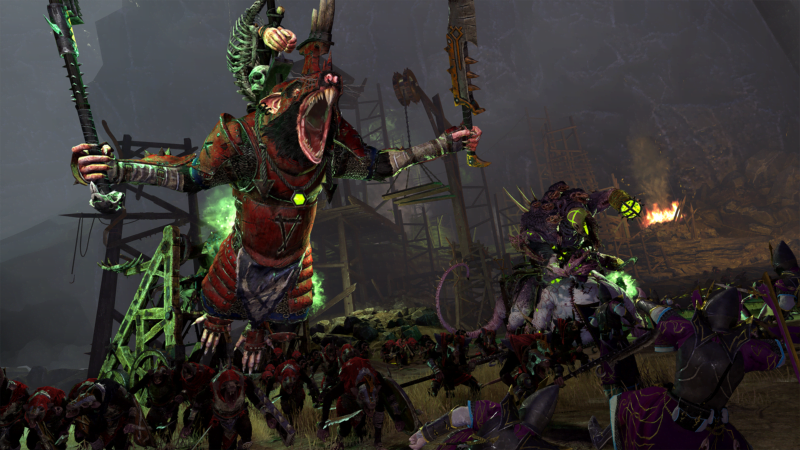 How do you feel fans of the Total War Franchise have reacted to the change to a fantasy setting?

RA: The thing is, it looks very different, but actually, there’s a lot of fundamental mechanics that are very similar. We have army building, we have conquest, we have city management, we have diplomacy, all these bits and pieces that people are familiar with. And I think once they look beyond the aesthetics; they realize it’s Total War through and through… We have a lot of loyalty to our fans, we listen to exactly what they’re saying. We try to do as much as we can where we can, because with this being a trilogy, I think it’s very different. Normally you make a game and then leave that game behind to start a new one, but on this it’s amazing. We’re making Warhammer 2 now, coming out in a few weeks’ time, but we’re getting to tinker around and play around with Warhammer lore content, and they [the games] are going to mash together as well. So a few weeks after launch, hopefully, we’re going to have the Grand Campaign, where you get the Warhammer 1 and Warhammer 2 maps colliding together with all the races available.

How did the decision come about to create a Grand Campaign?

RA: You take the rulebooks for the eighth edition and you just say: Crikey, there’s like a lot of races here, how are we going to do all of this? We decided early on that it was just too much to do for one game, and if we tried we would have done a disservice. You want as many of these characters and as many of these units as possible, all the fun stuff in between, so we said ok, how can we break this down? What makes sense? What gives you fun things to play around with, but also geographically as well. For Warhammer 2 we thought you can’t have Skaven without Lizard Men, you certainly can’t have a high elf without a dark elf, you’ve got to have that civil war. As a result, we’ve broken that down in the map. In the lore, the world is quite an expanse to cross the ocean, so we’ve warped the map to make it more fun and more playable. The water still plays a part, there’s things like whirlpools, buried treasure to go and explore, and that’s really key. When you’re going to cross from one continent to another, if you go and explore these treasure sites you can get campaign buffs, and you can get battle buffs, and it will really help you go invade that new territory. Or maybe you’ve been and you’re coming back home and someone’s been trying to attack your lands it would really help with that.

Now, you said trilogy… What’s going on with Warhammer 3?

RA: [Laughs] It’s quite early, obviously we’ve got some ideas, we know some more things that we want to cover, but it’s an ever-evolving thing. We made Warhammer 1, hopefully everyone thought that was a good game, this one, we certainly think we’ve taken it up a level. So, by the time thing we’ve mixed all those toys in with extra bits that we can think of… Warhammer 3 is going to be the pinnacle. All the key players will be there, anyone can get involved with anybody else – it’s going to be epic. I’m looking forward to it.

Once again, big thanks to SEGA, Creative Assembly, and Richard Albright for showing us the game and taking the time to answer our questions. Total War: Warhammer 2 is out on PC September 28th. Check back for our full review closer to launch!