While we only saw some early alpha footage, what was there was impressive. Rend is an open-world survival-crafting game set in a fantasy world where players join warring factions and must work together to protect their bases from the environment, and other players. While the formula might sound familiar, Rend promises to be everything but, with a refined system that will likely put it in the top ranking of its genre upon release. 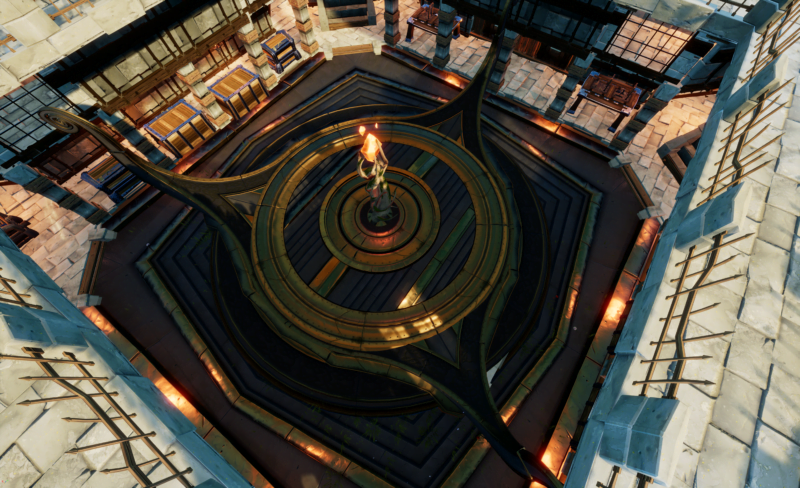 The first thing that the developers set out to do, was avoid the isolation and feeling of powerlessness that is present in many other survival-crafting games. From the outset, players will join one of three factions that are in a race against time to collect souls, maintain their bases, and explore the world. Even in the first few steps a player makes, they have a team, and are not alone in facing the world. This is a simple gameplay element, but one that aims to guide players through what can otherwise be the painful experience of early leveling.

Bringing each of these factions together is the common goal of collecting souls which when maxed out will grant that faction victory, and after a brief celebration, restart the server. The devs have said that this will likely take sometime between 1-3 months, but that they are still tweaking with the final amount of time it will take. Their goal was to create a system that allows players to get invested with their character, but not so long that they feel devastated when they lose it. The nice thing is that with each successive server reset players will earn meta points, which grant them the ability to unlock new skill tress, head starts, and more.

By resetting the servers, it also allowed the developers to create self-described “brokenly over-powered” weapons. As players advance to the higher level areas of the game, they can acquire weapons and armor with ludicrous abilities that can eventually turn them into a mini raid boss. However, while experience in specific skill trees is saved around death, items are dropped for anyone to pick up, making these high level players either a source of fear, or a target, depending on the size of the raiding party.

Which brings me to the PvP elements in Rend. The game is designed specifically to avoid a culture of griefing, and encourage players to work together. Each faction can build bases, which most of the time, are completely protected from PvP combat. A large shield surrounds the base for the entire day, until The Reckoning happens. This is a period during the day when the shields go down, monsters come out, and factions are forced to defend. While other factions will likely be defending their own territories initially, once the waves of monsters cease, the shields remain down for a set time and PvP continues. This leaves bases vulnerable to attack, incentivizing players to help defend, but also is infrequent, meaning no one has to worry about coming back to a destroyed base after a night off.

Within factions players can also form clans, which are smaller groups that go out and explore together. Clans can build houses outside of the faction’s protective wall, but as you might guess, they are completely vulnerable to player attack. This might seem like it will lead to a high amount of griefing, but destroying buildings is expensive in Rend, meaning that if a player doesn’t have a personal vendetta, they’re likely not going to waste their money on it. There are also other incentives to being sneaky about breaking into another player’s house, such as espionage.

In Rend, players can specialize in creating certain types of armor or weapons, and as they progress, the quality of their items increases. The trick is that these crafting recipes are left as notes on the player’s crafting table, and enemies can come in to leach experience from the table for their own crafting. In this way, it is potentially beneficial to not leave a trace of entry, because if the player notices their base has been broken into, they might increase the defenses for the next time.

Rend has some amazing potential, and from what we spoke of, the developers are still improving based on early feedback and will continue to do so. Initially it will release under the early access moniker, but in this case it feels like the team at Frostkeep is doing it right. They are releasing a full game, but adding to specific areas based on the feedback they get, rather than asking for money and putting out something that is half finished. Rend looks like it could absolutely top the survival-crafting charts, and provide a unique spin on the genre that solves many of its problems. a