The 90’s were an incredible time in the gaming landscape. We saw the release of several consoles, bundles of games that stick with us today, and some characters that will never leave our hearts. For those of us who didn’t own a console, we saw a variety of games come to PC that we’d never dreamed of. And just prior to the turn of the millennium, we saw the release of one of the greatest 2D war games of all time: Worms Armageddon. With tons of difficult missions, a wide variety of both practical and zany weapons, and a map editor, this game was the ultimate time sink. Worms W.M.D., which launched on the Switch, takes a massive swing to recreate the glory that came on that CD-Rom back in the day. In some places, it connects and sends its target straight into the drink, but in other areas, it whiffs entirely.

Worms W.M.D. is a fun game, it does a lot of things right, and plays pretty well for the most part. However, nothing about it is groundbreaking. It feels like another Worms game, which isn’t a bad thing, but it fails to capture the spark that was present in that jewel so long ago. The game contains a vast variety of content, including several training missions – which serve as weapon challenges as well, core campaign missions, assassination missions unlocked by finding collectibles in the campaign missions, and extra scenarios. The campaign missions seem to be standalone and don’t fully chain together in any discernible way, and the assassinations are more problem solving than anything else (ex. in the first one, you need to figure out which explosive barrel will chain the overly-high-HP boss into other barrels and mines to drop him in the drink). I enjoyed the assassination missions I played, but there was something left to be desired there. The game adds mechs and vehicles, which seem like win-button type additions (lock one of these down and you’re cruising to victory). Crafting in the game also feels somewhat hastily thrown in. You can craft during either side’s turn (which begs the question – why would you ever burn your turn crafting?), and make a variety of weapons if you have the right materials. There doesn’t seem to be a massive cost in making the best weapons, so there aren’t typically decisions to be made around this.

In terms of landing on the Switch, the game feels pretty nice. It’s an easy game in general to pause via sleep, and take on the go. It would be a great game for an airplane or train (something you can’t really be… intense about a game on). The controls feel nice, and the camera work is decent, but on the Switch screen, it can be very difficult to see the 1 pixel particle remaining in the sky, blocking your shot with a bazooka and ruining your turn. In terms of multiplayer, it’s a great game to be able to pass the switch back and forth during a session, due to its turn based combat. That being said, the lack of a map editor seems like a major oversight, especially considering the touch-screen nature of the Switch. There have been map editors in Worms games dating back to Armageddon 18 years ago, and they’ve always been a ton of fun to make up quirky and zany maps to have to navigate around. That possibility is gone from W.M.D., which is a mind-boggling decision. Also, the player leveling system seems somewhat arbitrary and pointless. After each session, the player receives experience points that goes towards the player level, unlocking different cosmetics. In previous Worms games, there was no unlocking different tombstones or voice themes, all these were unlocked out of the gate for customization of your Worms squad. 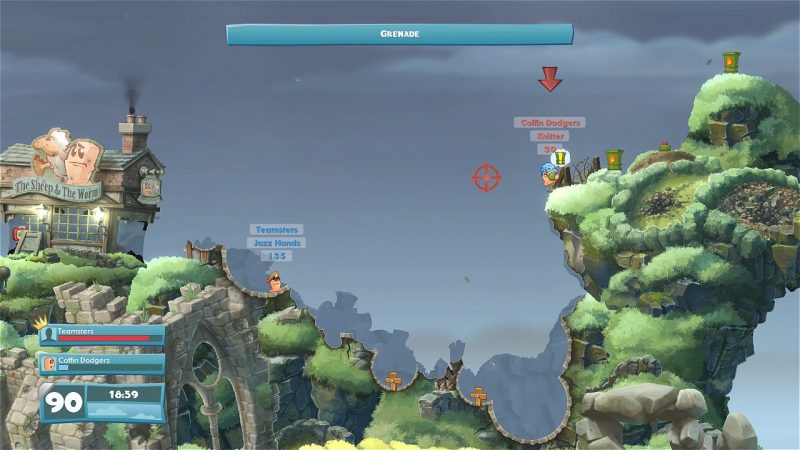 The different missions in Worms W.M.D. are fun for the most part, however they are largely forgettable. There are no missions like the one in Armageddon where you need to take the high ground in a flooding map, and use the worst weapon in the game to defend yourself – the prod. Even almost 20 years later, this level is lodged in my brain because of how different and fun it was. There’s just nothing like that in W.M.D., all the levels have some sort of theme and objective to them, but they’re all fail to leave a very large impression. The game also seems to drag things out during enemy turns, they tend to go through a thinking animation, which feels unnecessary since decisions are processed rapidly on the AI side. There should be some sort of fast forward option to quickly get through those turns if you’d like. While small, the impact of this quality of life change would have made my experience with the game much more enjoyable.

Overall, Worms W.M.D. does a lot of things right. The game is fun, and its a great way to pass time, but it fails to leave too big an impression. W.M.D.has a lot to live up to, with a rich history of Worms game, and while it does its best, it just can’t quite hit the same highs that others in the series have in the past. It truly feels like just another Worms game. If you like these games, you will most likely enjoy W.M.D.. However, if you don’t like the Worms games, you should probably avoid this one. There’s a lot of content that comes packaged in with W.M.D., so it will keep you busy for a while, but nothing in it is life-changing.