A common, recurring dream for many people is some variation on not being able to save someone else from dying. Think of it as a mashup between Groundhog Day and Uncle Ben’s death; you know how and when it happens, but you’re powerless to intervene. Stressful, right? Well, Second Wind Interactive has done their darnedest and granted us the power to step in and thwart the reaper in Just In Time Incorporated, a quirky VR game for the hero complex in all of us.

Just In Time, which is currently only available for the HTC Vive, puts players in the shoes of a new employee at a Death Prevention Insurance company, whose main goal is to stop the inevitable demise of their clients. Players run through a quick training phase and soon gain access to a myriad selection of missions, each with their own strange set of circumstances that require defying death. From suicidal clowns to Lara Croft knockoffs, Just In Time has no shortage of imagination when it comes to who to save and how.

Along with slowed time and open teleportation, players are given a set of gloves that can pick up nearly anything in the environment (including the clothes off every NPC) and catch/throw bullet and rockets. While the mechanics themselves sound fairly simple, the variation of each scenario makes for a new experience every time. Whether you’re catching bullets to save a CIA agent, or tossing trampolines to rescue falling civilians, the number of things you can do (including waiving your hands uselessly because you haven’t figured out what to do) feels nearly endless.

The game’s blocky design and colorful atmosphere compliment the often silly mission parameters, and the voxelated gore made each knife-based kill a reward in and of itself. Though the game lacks background music (which you start to notice almost immediately), the sound effects and your boss robot’s voiceover are excellent and fit the gameplay nicely. The hand, head, and body tracking all worked out fairly smoothly, and the transition between grabbing and throwing, or even changing an item between hands, was seamless, making for an overall excellent experience without any jarring motion issues. Open teleportation, as opposed to node-based, was an absolute necessity and made the small maps for each level feel more navigable.

So now on to the bad. Just In Time is a clever idea with brilliant implementation and fitting graphics, but there’s just not enough. With something like 18 individual missions, I was still able to beat the game in its entirety (bonus missions included) in under 2 hours. Each level is only several minutes long at most, and even having to repeat the harder challenges only took up so much time. Overall, it felt like a really well polished demo instead of the full game, and while I have no problem with short games, there’s always the issue of charging full price. It’s a bit disappointing since the game itself, while sometimes overly simple, is fantastically entertaining and funny to boot. I just wish there was more.

All in all, Just In Time Incorporated is a fantastic little VR experience, with the emphasis on..well…all of those descriptors. It’s fun enough to keep you wanting more, but the more never comes. I don’t know about you, but I want my highs to last longer than the time it takes to write about them, and I feel severely blueballed. The game is great and I highly recommend picking it up on a sale, but don’t be surprised when you finish it off without even having to recharge the controllers.

**bonus points for forcing players to watch the credits while simultaneously allowing them to murder the devs!** 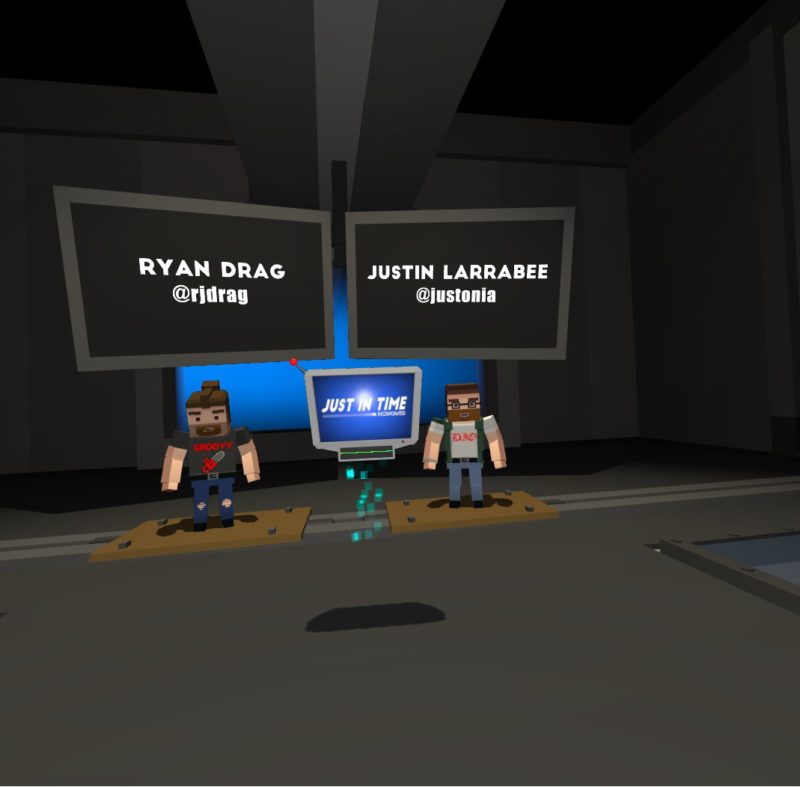 Just In Time Incorporated is a cleverly designed VR experience that shows a lack of content rather than imagination. Much like Tyrion Lannister, the game is extremely clever and hilarious, but ultimately too short. What's there is great, but it inevitably leaves you wanting more.

When his nose isn't diligently to the grindstone, Johnny can be found skulking around the dark corners of San Francisco's many pubs. You can contact Johnny via Twitter or ouija board.