IO games are the new hype because the gameplay is endless, allowing gamers to build up their strategies and skills without worrying over meeting an objective or working on a storyline mission.

Surviv.io is a simple game of challenging online battles, where gamers slaughter each other for a high kill count and a rank as the best of the best. It’s an endless game of shots fired, explosions, and hiding behind bushes (for those noobs out there), and there’s no slow start-up or practice rounds. You are thrown right into the action from the very beginning—then you have to navigate your way through five-minute rounds, each more intense and brutal than the last, and all in an endless procession. 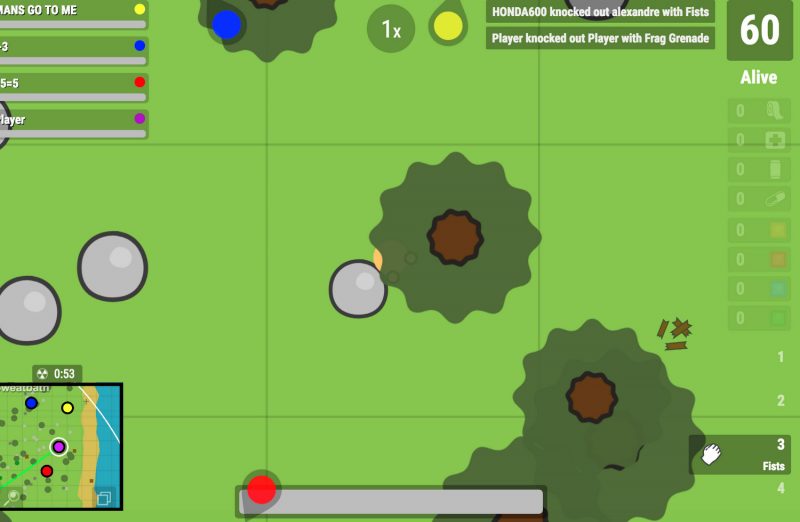 Surviv.io rounds are five minutes long and super intense. This makes for dedicated, invested gamers with keen focus, sharp minds, and fast fingers. Survive—that’s your main mission over the long haul, but in short bursts. You have a few seconds to gather your thoughts, stretch your hands, and refocus your strategies between each round. But otherwise, you play until you get tired of playing. So, if there’s no objective, then what’s the draw? Surviv.io, just like other io games, has the draw of being fun for the sake of fun. You don’t have to plan around objectives, missions, or boss battles.

You can simply hone your skills and strategies to rack up kills and become better at the kind of games that you like to play. Io games involve strategic thinking and skill building that could help you adapt to any kind of game in the future. Plus, they can be great boredom banishers and stress relievers.

There are dozens of weapons to choose from in Surviv.io—some that require bullets, some that require skill and throwing power. But all of them are effective in decimating your opponents and pulling your username to the top of the kill count ranks. That said, the weapons with bullets are probably the most dangerous—and not only towards your opponents.

The awesome Surviv.io made bullets that bounce. Ergo, if you don’t map the trajectory of your bullets, then you might get a ricochet that takes you out before it can do anything to your rivals. Plus, you have to worry about the ricochets of your opponents too. If you manage to dodge a direct hit, make sure there’s not a building or a wall near your character, because that active bullet spells an add to their kill count if it hits you—even as a ricochet.

Some of the most popular weapons include:

The Vector is the most popular submachine gun in Surviv.io. It has a super-high firepower with maximum accuracy, but a punchy kickback. It can usually be found in the Hydra Bunker when you go searching for loot, and the spray decimates most opponents on contact. However, use this one sparingly because it burns through ammunition like crazy. It’s better early game when there are more targets to hit, but it can be a hassle late game because reload time is slower than the firepower rates. 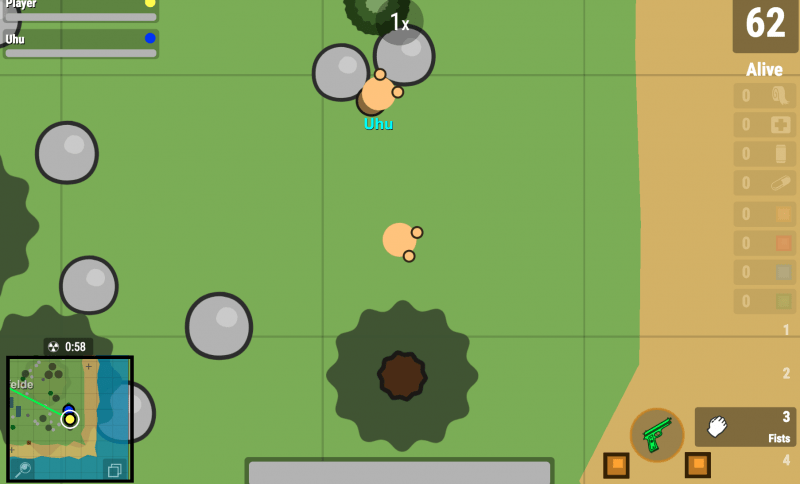 Fists. No…really. Your fists can be used as heavy-duty starter weapons, especially when your opponent is a) out of ammunition, b) using a weak-powered weapon, or c) without a weapon completely. Fists are the only melee weapons in Surviv.io, so they are strong and quick with death-pounding accuracy that will leave your opponent broken in no time. Just beware of using your fists on those with high-powered weapons. Your punches don’t stand a chance against someone with a sub-machine gun or an assault rifle, especially at close range.

The Mosin Nagant paired with the game’s explosive barrels. The sniper rifle itself is heavy-grade with a big boom of power that takes out your opponent, usually, on the first hit. But the fire rate is slow and the reload is sluggish.

To make this rifle more effective, gamers often drop back and hide to wait out their opponents. When some rival wanders in front of a barrel, they shoot one shot and the barrel explodes to engulf the opponent in a fiery death.

Surviv.io is full of barrels. But where other games rely on you to smash the barrels to snag your treasures, this game’s barrels are filled with explosives that boom on contact. Ergo, steer clear of hitting them. Unless you act strategically with a high-powered weapon, from a safe distance, and in the presence of an opponent.

Many first-time players of Surviv.io assume that there’s no way to reload their weapons because there aren’t any bullets to pick up. But the ammo is hidden in colorful blocks around the map. Don’t throw your weapon away. Find a colorful block to see if the ammunition you need is inside.

There are team modes where you can either be paired with friends or random teammates. These teams offer protection and strength in numbers, but your kill counts become theirs and vice versa. If you have a problem sharing your successes, then steer clear. But if you like the idea of ambushes, protective teammates, and a feeling of comradery, then opt for this option before you start your game.

You can smash rocks to discover extra ammunition, new weapons, or stronger armor. Or, you can loot the surrounding buildings and flip their furnishings to find the same kinds of treasures as you would by crushing rocks.

There are two kinds of grenades: frag grenades and smoke bombs. The frag grenades are classics and you can use them to blow up your opponents the old-fashioned way. Or, you can stand back with a long-range rifle, toss a smoke bomb, and wait for the choking smoke to flush opponents to the surface so you can pick them off.