The team at Avalanche has upped the ante once again with their destructive playground in Just Cause 4. There are hundreds of new combinations to cause chaos ranging from balloons to float your enemies helplessly into the air, to rocket tethers that send their vehicle spinning like a fiery child’s top from hell. As with the other entries in the Just Cause series, variety is the glue that holds it together. Unfortunately, a lack of narrative charm and polish make Just Cause 4 a fun, but wholly uneven experience throughout.

Just Cause 4 picks up with the familiar Rico Rodriguez making landfall on another fictional island, warring against another big, fictional, evil organization, with a new cast of supporting characters. While the Just Cause franchise has been known for ridiculous over-the-top storylines, Just Cause 4 is the first in the series that feels like it really misses the mark. Just Cause 3’s narrative of taking down a fascist dictator felt tongue and cheek, with plenty of humor, and some amazing action set pieces to tie it together. Above all, the dialogue was funny and made for interesting character interactions. The best I can say for Just Cause 4’s dialogue is that it sounds like a high school film student’s attempt to summarize the plot of a Michael Bay film. The amazing destructive set pieces are all there, but the characters provide no interesting moments, aside from a few notable exceptions, and even Rico’s one-liners have started to grow old.

With the developers’ focus on innovation in all other aspects of the game, it feels disappointing to see the story remain so flat and tread such familiar ground.  The beats do leave room for some truly epic explosions and create an excuse for the extreme weather conditions on Solis, but often I found myself wanting to skip cutscenes altogether and just move on. Unfortunately, many of the single player missions just feel like a chore, and the side missions can be even worse. There were a few standout fights in the main storyline that really nailed it, but they were overwhelmed by a deluge of chaff. It feels like the team at Avalanche could have pulled more from their experience with Mad Max as well as past titles to create some memorable characters and experiences in the main story.

Now, all of those gripes aside, the story is not what brings most players to the Just Cause series, myself included. The real attraction is the destruction and ridiculous playgrounds of death that Avalanche is so masterful at creating. In this respect, Just Cause 4 exceeds all expectations, adding more variety and customization to destruction than ever before. Rico’s main weapon, his grappling hook, has been given a major upgrade, with more options than ever before for tether modifications. Players now have the ability to choose between rocket jets (similar to Just Cause 3’s rocket mines), balloons, and traditional tension grapples. Each of these modifications also has various levels of force, allowing players to choose if they just want to give a car a rocket nudge, or send it space bound. Combining the different tether types led to some amazing WTF moments and kept gameplay interesting, even when missions were formulaic. These tether modifications are also unlocked almost immediately in the game, which is a noted improvement over the unlock missions in Just Cause 3. 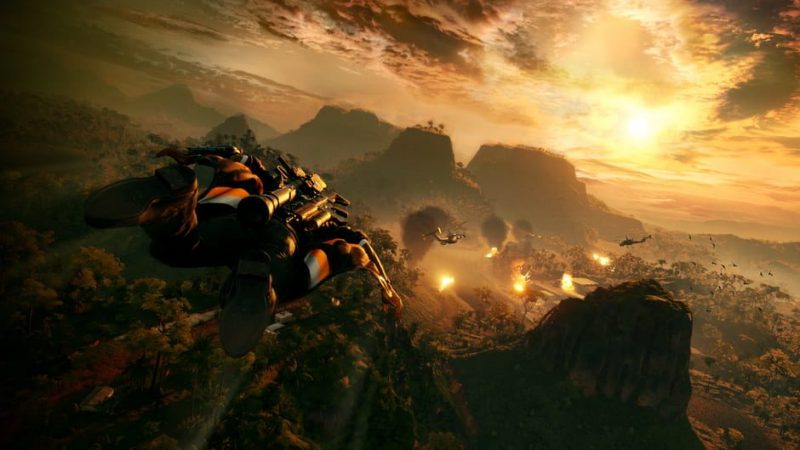 In addition to grapple hook modifications, the game’s weapons have also been given an overhaul. All weapons now have a primary and secondary fire and range from traditional assault rifles to massive rail guns. Gunplay still feels very floaty and has very little precision to it, but the lack of finesse does make it easy to make bad guys go boom. The enemies also appear to be aiming through beer goggles, because despite their impressive array of weaponry, it’s very easy to avoid them altogether on missions and blast forward to the objective. This makes Just Cause 4 a very easy playthrough with little challenge, which isn’t a knock, but might deter some players.

The last new addition to Just Cause 4’s arsenal of destruction is extreme weather. Avalanche overhauled their game engine between Just Cause 3 and 4, focusing heavily on physics-based weather and destruction. The result is incredible. Depending on the area of the map players are on, they will experience various types of extreme weather. Sandstorms can kick up in the desert, bringing back memories of Mad Max, extreme lightning can change wingsuiting from a leisure activity into an act of survival, and tornadoes can be filled with rockets to make exploding vortexes of death. Each weather type adds its own challenge and opportunity for unique destruction, and functions exactly how players would expect it to. Wingsuiting through a lightning storm? Stay lower than the other enemies and they’re going to get hit by lightning first. These little touches make the weather system more than just a gimmick and truly enhance the game.

But what would a new weather system be without a beautiful engine to render it? Just Cause 4 looks best at a distance, with its massive sprawling world providing amazing views and cinematic chaos. Where it runs into issues is in the close-up moments. When Rico is on the ground, textures can look uneven, terrain hit boxes are often not where they should be, and vehicles, enemies, plants, and terrain all pop in at random. It is worth noting that I have heard these issues are lesser on PC, but our review code was provided for Xbox One. Even playing on an Xbox One X, I was often distracted by the bad textures in specific areas of the map, and some pieces of terrain that felt unfinished or looked buggy.

This lack of polish extends into the game’s cutscenes which look worse than the last entry in the series by a mile. Character models are stiff and have a lack of expression that is almost comical at times. Even Rico has issues with his beard looking like it’s in the middle of loading as he’s starring in a big action scene. Overall, the cut scenes and close-up character interactions are just bad. It also doesn’t help that the game cuts right to a loading screen anytime a cut scene is triggered breaking the immersion. This is true even for in-game renders that are just a few lines of dialogue. There’s a loading screen before and after. It’s distracting and hurts the experience significantly.

Overall, Just Cause 4 is a mixed bag. Fans of the series are sure to have a great time with the game’s new physics engine and customizable tethers, but newcomers might be overwhelmed by the game’s poor narrative and graphical bugs. It’s worth noting that Avalanche has said they are committed to fixing many of these technical issues, but as of now, they are still present in the main game. Just Cause 4 asks users to make their own fun by experimenting with the best way to make a big explosion and take out the bad guys. For me, it feels right at home with the tone of the other games in the series, even if the story is a flop. Despite the issues, I often found myself smiling at the ridiculous chaos I was able to pull off, and still had a lot of fun in my time.

Technical glitches and a poorly-written campaign detract from what is otherwise a very enjoyable destructive sandbox.