Players are charged with collecting these tales through wandering across the country on foot, by rail, or hitchhiking. Stories are scattered around the nation and collected to recount around campfires. Just like in real life, these stories change over time, and in some cases, grow into legends.

The true star of Where the Water Tastes Like Wine is its writing. Scattered throughout the world are hundreds of unique stories ranging from sci-fi pulp to serious tales of loss. Each encounter feels unique, and only grows more interesting with the re-telling. As a player recounts their stories, the people they share them with might re-tell them if they like them enough. Stories travel from person to person, and new details are added, making them more appealing for the next time they’re told. For example, while an original story might have been two bootleggers being arrested, in the retelling, it might become an epic gunfight. Watching these tales evolve is one of the game’s most enjoyable experiences, and evokes feelings of nostalgia for the original stories as time goes on. While some of these interactions do get a bit repetitive, for the most part, dialogue stays fresh and original from encounter to encounter.

The entertainment value of stories is important, because it’s the only way to get other characters to open up and show their true selves. The game’s main objective is to learn the nature of people, and that’s done by meeting them at campfires across America and telling stories until sunrise. These interactions are simple, but powerful. Through successive meetings and nights spent by the fire, players can eventually get a person’s life story. These tales are impactful and sure to entertain, needing little embellishment Eventually the goal is to bring the truest of stories back to pay off the player’s debt, but the real joy is in the journey.

However, travelling across America is not without peril. Players have to manage food, money, and sleep, and while for the most part these aspects alone won’t kill you, they do come into play during encounters. For example, after a physically taxing encounter, player’s may need to find food to replenish their strength. In some cases, wrong moves can even lead to death. Not to worry though, in this game, death is very temporary. After being beaten to a bloody pulp on a train car, I found myself back in the same bar I started, recounting my adventures to my debtor. Then it was right back out on the road again to discover what new stories I could find. There’s a small penalty in losing one’s geographical location on the map, but overall, death is an expected part of the journey, and not a real detriment.

Speaking of the journey, the world of Where the Water Tastes Like Wine feels vast. While traversing states might only take a minute or so, the entire US is open. A player can walk from New York to Oregon if they want and will encounter all manner of folks along the way. Even the time in between stories, just walking along the plains is made enjoyable by an incredible soundtrack that heightens the game’s already established aesthetic. The songs fit the theme of traveling and make each step feel like its leading to something bigger.

The game’s art is equally impressive. Every interaction is told through a series of sketch-style still images. While there isn’t much animation, these pictures do more than enough to convey the story and have weight. Where the Water Tastes Like Wine is about storytelling, and through only showing still images, it forces the player to engage their imagination a bit. It’s a challenge not often issued by games anymore and means that each player is bound to have a unique experience, fueled by their own life, rather than one that is prescribed for them. 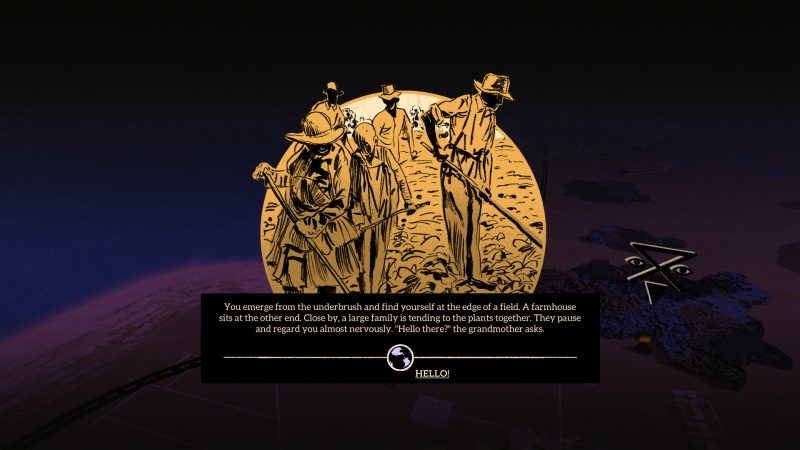 In my time traversing the continent, never once did I feel bored, or like there wasn’t something new to discover. There were plenty of tales to hear, and when there weren’t, old ones had been improved. Where the Water Tastes Like Wine is a wholly unique experience, and unlike anything else I’ve played recently. Writing a review for it doesn’t do the game justice. To truly understand its appeal, it has to be experienced. Good Shepherd has created something remarkable, and I can’t recommend it enough.

Also, be sure to check out our interview with Dim Bulb Games Founder, Johnnemann Nordhagen.