My Friend Pedro (MFP) puts players in the shoes of an unnamed, psychotic protagonist who listens to the suggestions of a homicidal banana in his head. The gameplay is reminiscent of Hotline Miami, with a little more forgiveness, a lot more slowmo, and ridiculous physics. 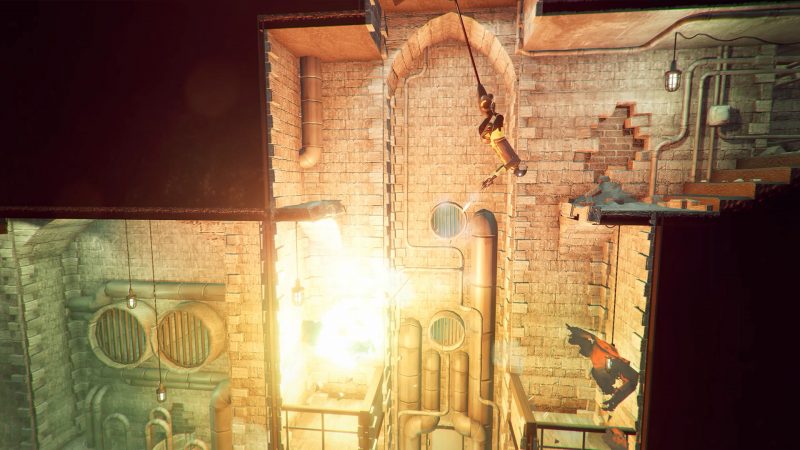 MFP wastes no time in making the player feel like a badass. After a few short tutorials, players are zipping through levels taking down gun-runners, drug dealers, and a gang of bounty hunters for no reason other than they were there and an imaginary banana told them to. Combat is fluid, easy-to-understand, but tough to master. Even with bullet-time, when there’s four enemies on screen, it can feel like a lot to manage, and the game encourages players to think quickly. While the core of the game is about platforming your way through levels and killing everyone along the way, there’s also an ever-diminishing combo meter at the bottom of the screen. To get the best grade on a given level, players must chain their kills together and keep up their speed between areas or risk losing their streak.

Because of its combo mechanic and gory, quick-paced, gameplay, MFP is sure to draw a lot of comparisons to Hotline Miami, but the two feel -distinct. MFP’s time-to-death when you’re outside of quicktime mode is fast, but not Hotline Miami fast, and when using bullet-time, the player can take quite a few shots. There’s also healing packs that drop every so often, to the point where I never felt like I was in danger of dying aside from the boss fights. This often meant a plan wasn’t necessary beyond: I’m going to shoot that gas canister and then keep shooting until everything works out. 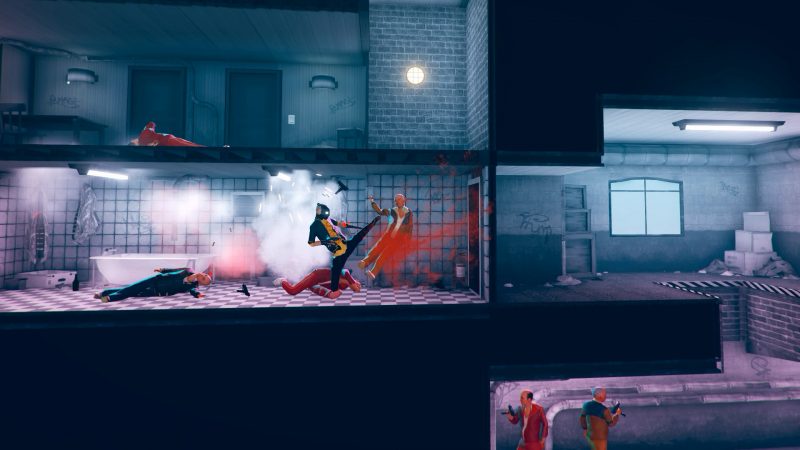 Which brings me to the guns of MFP. There aren’t many compared to some other shooters, but each weapon is distinct and serves a specific function. However, in the tradition of shooters, MFP’s shotgun is easily the best and most ridiculous of all the weapons. Whenever I had enough ammunition (something I ran out of often), I would use the shotgun for any-range combat, because while the bullets spread, their damage is the same at any distance. The most commonly-found weapons weapons are a simple pistol and a submachine gun. Both can be dual wielded and used for split shot (where the player can aim in two directions at once).

While the game’s gun variety isn’t vast, the levels provide plenty of other ways to take out baddies that are fun, ridiculous and gif worthy. From kicking the skulls of fallen enemies, throwing knives, or reflecting bullets off of frying pans, MFP has plenty of amazing environmental kills that serve to spice up what can feel like repetitive gameplay at times. Anytime I was starting to get bored with a section, a new environmental mechanic would be introduced that changed things up the right amount. My favorite, by far is the skateboards that appear in some of the game’s levels. They make for quick traversal and can be kicked at enemies for lethal damage.

Finally, the level designs of MFP are fun and varied, but the setting oftentimes feels too bland. Apart from a very odd section in the middle of the game, most of the warehouses, rooftops, and alleyways don’t feel distinct from one another. It’s a shame, because the new mechanics introduced throughout are interesting and bring life to the gameplay, but it’s hard to tell the difference in the game’s worlds. On the bright side, each section ends with a great boss-fight, bringing new mechanics, new settings, and new forms of action to the table. From motorcycle chases to combat while falling off of a skyscraper, there’s plenty to love.

MFP stands out as a title that’s just trying to have fun, and that works to the player’s benefit. Even when I grew tired of the repetitive level design, I kept coming back because the gameplay was tight, and I wanted to see how fast I could get through the next level. It’s also more accessible than some of the other quick-paced shooters on the market with a difficulty level that ramps up at a reasonable pace and doesn’t require a thousand deaths to master. The game is built to create ridiculous, over-the-top action moments from movies like The Matrix and John Wick, and in that sense it succeeds. The mechanics are easy to understand, but hard to master, and create a rewarding experience overall.

MFP stands out as a title that’s just trying to have fun, and that works to the player’s benefit. The mechanics are easy to understand, but hard to master, and create a rewarding experience overall.