Repetition in video games is an interesting thing. We often think that repetition should be avoided at all costs and that games which repeat themselves frequently are somehow worse or less commendable than those that consistently offer up fresh content for us. Repetition, we are told, creates boredom and frustration, leading us to give up on games and seek something new. This is often thought to especially be the case with modern millennials, who are sometimes seen as overstimulated and requiring constant innovation in order to remain sated.

Of course, this simply isn’t the case. Many great games are predicated entirely around repetition, including the arcade classics of the halcyon 1980s. Games like Pac-Man, Frogger and Space Invaders depended entirely on repeating their central concept over and over again, challenging players to endurance tests which would enable them to beat their own high scores rather than engage with single-player storytelling. This approach was probably born of the arcades; it’s not easy to concentrate on narrative when you have hundreds of kids shouting around you.

This is a mentality that Australian developer Hipster Whale is almost single-handedly keeping alive. Using its access to companies like Namco and Disney, Hipster Whale evokes the nostalgia of a bygone era while still creating fresh, innovative titles for today. Games like Pac-Man 256 and Shooty Skies are clearly based on yesterday’s arcade titles, but they still feel fresh and compelling. Hipster Whale’s best-known game is perhaps the Frogger-inspired Crossy Road, which has had a new coat of paint applied to it in the form of the Space update. We think that makes this as good a time as any to go back and look at the game anew. 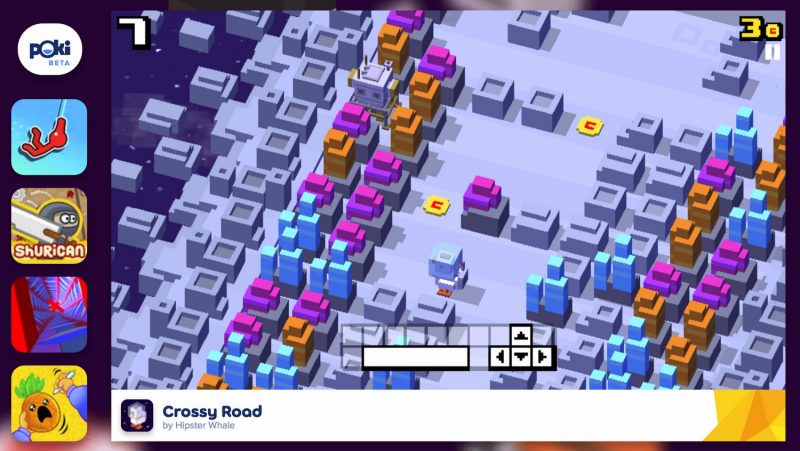 Crossy Road’s home on the web is Poki, which exclusively offers the game via your browser. That’s fine by us since Poki makes switching between the two versions of the game incredibly simple. All you need to do when you fire up the game is choose either the Original version of Crossy Road or the Space theme, and the game will switch accordingly based on what you pick. The buttons for each are large, clear and easy to see, so you’ll always know which version of Crossy Road you want to aim for. Our money’s on the Space version; it’s new, it’s interesting and it adds a few new fun surprises.

If you haven’t played Crossy Road before, think of it as Frogger but seamless, endless and with added collectibles. The basic gameplay strongly resembles Frogger; you play as an animal who must reach the other side of a series of incredibly dangerous roads and other obstacles. To aid you in this quest, you have…nothing. All you’re able to do is move in four directions, with no weapons or additional gameplay extras to be seen anywhere. Crossy Road boils down the fundamental video game experience, with “do not get killed” its main and only objective – other than finding the coins, of course.

That doesn’t mean Crossy Road isn’t fun. Far from it, in fact – the people at Hipster Whale clearly know how to create engaging video game experiences through clever use of repetition and unlockable extras. Each obstacle presents a mini-challenge to the player, daring them to collect that coin which is just out of reach at the expense of precious time and movement options. Sometimes, a coin will be hidden behind a wall, necessitating the use of backwards movement, something which Frogger didn’t encourage. Crossy Road thus contains some light strategic elements alongside its reaction-based arcade fun. 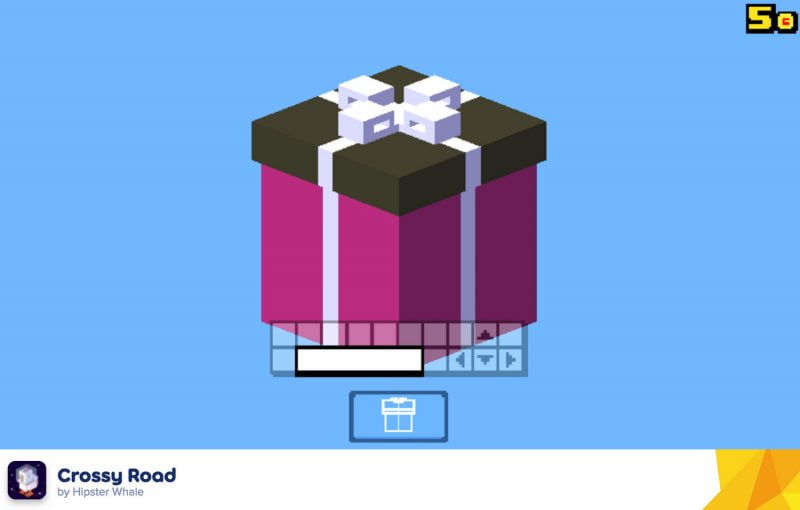 Collectible coins are used in a slot machine “minigame” which allows you to unlock extra characters. Collecting coins is easy – they’re dotted around the level, and while you’ll have to go out of your way for some of them, others are simply sitting in plain sight waiting for you to collect them. Crossy Road’s original cast of characters is zany and fun, with some surprising licenses thrown in (which we won’t spoil), and the Space version adds even more extra avatars for you to enjoy, all of them, of course, themed around space.

Controlling Crossy Road couldn’t be easier, with the keyboard arrow keys used for movement. Each playthrough is random, creating a theoretically infinite amount of content for you to enjoy in Crossy Road. The game is as long as you want it to be; it’s great for short play sessions because you can choose when you die but also because you can dictate the time period by doing so, and it’s also great for lengthier sessions thanks to its endless and seamless nature.

The Space update for Crossy Road adds some fun new characters and a new coat of paint for the main map, but it’s mainly just window dressing (albeit extremely attractive and well-made) for what remains an incredibly strong core game. If you love Crossy Road already, you owe it to yourself to check out the Space version of the game, because it’ll give you a reason to fall in love with our intrepid little chicken and his pals all over again. If you’ve never played the game, this is the perfect time to dive right in and get started. There’s more content than ever in this new version of Crossy Road, and the central gameplay loop remains as addictive as ever.