Since we first launched Skyforge on Xbox One, you’ve been on adventures hitherto undreamt of, and ventured worlds uncharted. Ancient powers have been awoken from the annals of history, and more importantly, Immortals across our world have worked together to protect Aelion from the constant threat of invasion. The adventure isn’t over yet, as we’re very happy to invite you to celebrate the Anniversary of Skyforge with a new expansion!

The Anniversary is the perfect time to welcome new features, including some very popular player requests. We’re introducing a huge new change to player progression, which sees the eccentric god Flavius closing his Laboratory to welcome the Invasion Atlas. This celestial star map differs with every Invasion, and offers you the chance to specifically define your journey through Invasions, while picking up interesting bonuses along the way.

As you progress through Invasions, you can unlock nodes that will grant you interesting perks. Do you want to dish out more damage in combat, or increase the efficiency of your class? You can do that with the Invasion Atlas, just make sure you follow the correct path. With over 100 nodes to unlock and countless ways to progress, no two Invasions will be the same. We’re excited to see you sink your teeth into this new feature, and we hope you keep finding unique and fulfilling paths during every Invasion!

Another new way to switch up your regular gameplay sessions is by tackling adventures in Nightmare difficulty. We know that after so many Invasions, it takes a lot to phase an Immortal… but the introduction of Maledictions should change that! These modifiers can be applied to your adventures to truly up the ante. You might take more damage, find yourself unable to activate your Divine Form, or face enemies that can heal or grow more powerful. It’s going to be tough, but if you face your fears and overcome the Maledictions, you’ll earn sweeter rewards, and you might even unlock more nodes on the Invasion Atlas.

Speaking of Invasions, there’s an infestation growing on Aelion. Spring is in bloom, and the Phytonides have seized the opportunity to pollinate the planet with evil! Led by the Avatar Machavann, you’ll have your work cut out for you if you want to stop Aelion from becoming one big, messy garden. If you can get to the root of the Invasion and send these flowery fiends back from whence they came, it’ll be more than worth your while…

Of course, with every new Invasion there are rewards. If you’ve seen the Anniversary trailer, you’ll know that the divine warrior Wakan is a powerful entity that has watched over Aelion for eons. They’re familiar with the escapades of Aelion’s Immortals, and while they’re not the most trusting of deities, it seems you’ve finally impressed them enough to become worthy of their power! Make invaders tremble by unlocking the Divine Form Wakan and other game-changing rewards from the Phytonide Invasion Pass, which is available to purchase in-game.

If you need a little extra firepower to tackle the Phytonide Invasion and fancy revisiting some classic classes, a trio of new Legendary Weapons is available for the Gunner, Slayer, and Necromancer. These luxurious weapons will bring a touch of class to proceedings, so try not to turn them green while you’re weeding out Aelion’s pests!

Oh, there’s one more thing… Aelion wants to throw you a party! Every year, Aelion Day celebrates the bonds that unites its people, and their special affinity with the Immortals who have safeguarded the planet from invasion for generations. Right now, you can get stuck into a selection of special missions, and earn five special Anniversary costumes as thanks for your good deeds.

We’re also very thankful to our global community of Immortals for adventuring in Skyforge with us for all these years. There’s many more to come, and we can’t wait to share more adventures with you. Now, let’s celebrate together on Aelion! Skyforge and the Anniversary expansion are now available to download for free from the Microsoft Store, and you can also purchase the new trio of legendary weapons from today. 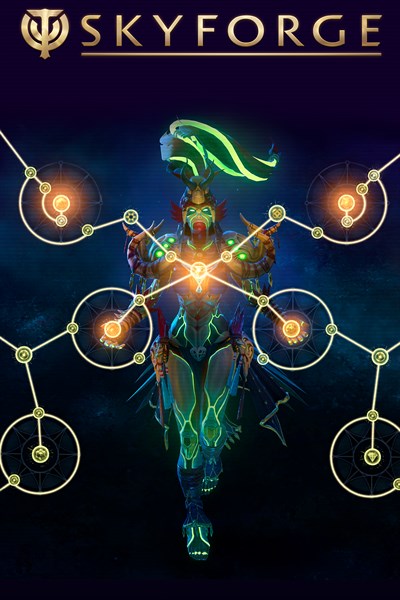 ☆☆☆☆☆ 295
★★★★★
Sci-fi and fantasy collide in Skyforge, a free-to-play MMORPG set in the breathtaking world of Aelion. Play as an Immortal with the ability to switch between 18 unique classes, and master amazing celestial powers to defend the planet from invasions! • You’re the last line of defence — fight off invasions online with players around the world! • Discover an immersive universe of incredible content in over 100 different locations. • Master a dynamic and intuitive combat system and control scheme perfectly suited to Xbox One. • Switch between 18 powerful unlockable classes, including the Soundweaver, Grovewalker, and Revenant.